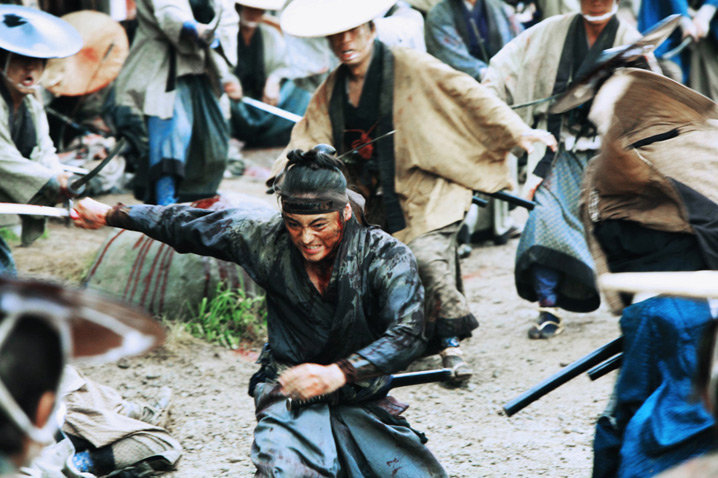 A question for you: how do you deal with contradictions in a director's filmography?  The question becomes more complicated when talking about  "workman" filmmakers like Japanese maverick Takashi Miike or Johnnie To (or, going back, of course, Howard Hawks, Raoul Walsh, William Wellman, and the lesser known)—with such prodigious output, how do audiences, critics, and the artist-workers themselves understand the instances of one film project contradicting another?

How, in the case of To, do we talk about Election and Triad Election (a.k.a. Triad Election)—critical indictments of violent genre cinema—when those films are followed up by Exiled, which proceeds to indulge those very same conventions?  Or, in the case of the director of the subject of this piece, how does one look at 2004's withering time traveling anti-violence treatise Izo, and then see, several films later, 13 Assassins—as classical or old fashioned a samurai film as there ever was?

13 Assassins, which opens this Friday in the U.S., in fact embodies the contradictions apparent in a filmmaker who has in the past made works that satirize such a conventional venture—you know the kind, where a secret group of samurai must quietly assassinate the Shogun’s misanthropic half-brother to prevent more bloodshed, a civil war, etc., and do it against overwhelming odds. The quietly bipolar nature of the film is apparent from the start, where the plot goes through the motions while Miike zeros in on aesthetic atmosphere through the velvety look of his digital photography, shooting conspiratorial meetings all lit by soft, natural candlelight, and, later, an excursion through a naturally lit forest catching the kind of detail, flatness of composition, and unusual look to the light mostly absent from the film’s boring daytime pallor of smeary grey-brown muck.  But meanwhile, surrounding these revelations, the plot has to be churned through in exhaustive exposition about duty and where to kill the lord and how to set up defenses and which samurai to hire, all tiresomely and thoroughly filmed.

So we have a conventional track the film must follow, inside of which Miike finds a catalog of side observations to be made within this trite genre structure: a scene of the assassination squad bathing in the forest, the use of the same actress to portray one assassin’s faithful wife and a jungle savage’s lost love, and dozens more similarly evocative asides located within the 45 minute (!) final action sequence.  Of course the film builds to the assassination, but the epic sequence involves less of the precision that term implies than a self-annihilating bloodbath of extreme duration.  Yet this duration does not equate to action-film-euphoria: despite its length and detail, Miike chooses to shoot his finale with long lenses (and digitally of course), so all sense of choreography or thrill is evacuated and we are left with a numbing, repetitive collage of swinging swords and falling bodies.

Suddenly the dull color of the day scenes make sense, when, in motion amongst dozens of active swordsmen, the camera flattens everything into a fragmented, tapestry-like blur of death.  And inside this whirlwind are indeed moving Miike moments of modestly totemic genre beauty: the image of a naked boy pissing in the street (falsely) tells the lord’s retainer that the ambush location is safe to travel through; an apprentice is mortally wounded, falls upside down, and watches his master fight and die from this position in a moving, unexpected reference to Rebel without a Cause; and the mindless, tenacious slashing of swordsmen over-exhausted, over-fought, and bleeding to death, heaving themselves at fighters they no longer can see.

As this finale makes clear, Miike is well aware of the conventionality of 13 Assassins and clearly is comfortable following and continuing its form.  But he seems to do so if only he is allowed to either play with the established aesthetic, breaking free for a moment of gleeful winking (the evil lord, instead of avoiding trouble, decides to take the road that will undoubtedly lead to danger and explains by looking at the camera and saying “the foolish path is more fun.”), or, more often and with the best results, step aside within the conventions to observe something strange, moving, true, or human that exists there, just to the side of what a normal genre entry would choose to reveal.  It is Miike’s obstinate preference to still reveal things inside the most conventional of projects, structures, or details that marks him as one of the most continually fresh and exciting of directors, and 13 Assassins bares all the scars of such a beautiful approach.

But does this resolve the issues that rise at the revelation that the filmmaker follows Izo with a film like this?  Perhaps the greater issue is the validity of the implicit view that a filmmaker continually gets better: their films get better, they have a greater understanding of their films and their craft, a greater coherence to their filmmaking, an evolution of their thought and form.  Is this necessarily true?  Even if it's not, is it an expectation audiences have?

This review is a modified version of original coverage from the Toronto International Film Festival in September 2010.