"When I started making movies, there were 'movies' movies. Now 'movies' seems to be commercials, music videos, images off the Internet, there's all this imagery now."

Every movie's got an aspect of mise-en-scene and an aspect of mise-en-abyme. I don't mean the literary definition of the mise-en-abyme (which André Gide repurposed from heraldry in the 1920s), whose facile application leads to discussions of structure or plotting, dream sequences, "framing stories," or, if you’re lucky, pictorial effects. No, let's get down to the most basic idea behind recursion, free of any negative connotations: small elements are related to larger ones. Right now, we’re finding ourselves thinking more and more about how a film reflects on the history of images. 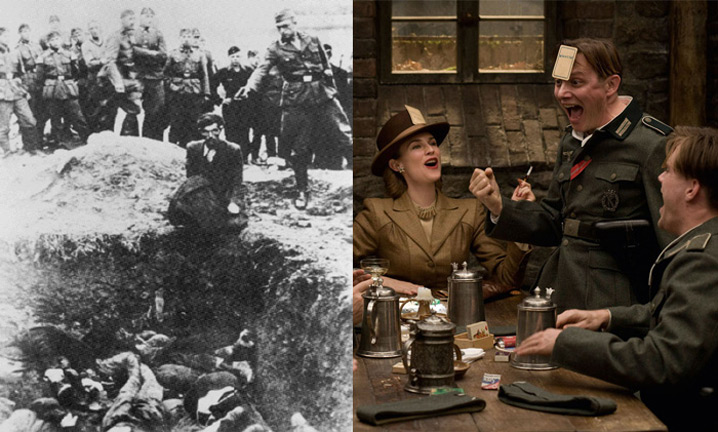 Take Inglourious Basterds, for example. The images of Nazis it presents us are in some ways offensive.  I don't think that sort of shock would've existed 50 years ago, when the war was much closer – or during the war itself. Really, the Nazis of Inglourious Basterds have a lot more in common with This Land is Mine, To Be or Not to Be or Hangmen Also Die than with, for example, Downfall or Schindler’s List. So why are we offended by Tarantino and not Renoir, Lubitsch or Lang, whose Nazis are equally removed from history? Because while the war is further, its images are much closer. Atrocity is a Google search away. Cinema gives us images, and because "image" can encompass almost anything (like a sound, which might be a door creaking or a singing voice), all images are equal: we have to put movie images alongside photojournalism, paintings, the image of sculpture in the gallery, musical notation and the image of text on the print page. And also alongside the history of cinema. The corrective and the contradictory are useless; they're all just (merely and fair) images. A big mess, like celluloid unspooling onto the floor. The need to engage with this aspect is increasingly relevant. It's inescapable.

Mise-en-abyme seems to describe the phenomenon of, say, Leos Carax better than mise-en-scene. He’s a drowning man, gasping for air while being swept away by a current, all these goddamn images. If from the dawn of sound to the 1960s, cinema was haunted by literature, now it’s haunted by itself. The Ghost of Movies Past keeps us up at night.

Over the course of a century, cinema engulfed culture. By being able to be the equal of anything, it made everything itself. It was as good as painting, and now we can say Manet is cinema and that when José Luis Guerín, in In the City of Sylvia, composes a shot to resemble "A Bar at the Folies-Bergère," he's not referencing painting but drawing on cinema, the same way painters used to copy the compositions of masters to guide them in their work. This wasn't true in 1910; it took Bresson to make it so. The more elements cinema eats up, the more it rewrites its history. It's because cinema has consumed music that I can think that, though Scott Walker is not a director and his albums are certainly albums and not movies sans images, that The Drift is cinema. Now, because I can trace a line from Caravaggio's The Cardsharps to Owning Mahowny, I can also see the link between Helmut Käutner and Gustave Caillebotte and I can say with certainity that the paintings of Frank Auerbach have as much do with cinema as the movies of Alan Rudolph. In Auerbach's pictures we can see impressions of the history of painting, Auerbach's own experiences and the act of painting itself – he's as much the mise-en-abyme filmmaker as Leos Carax.

There are those that work despite or against the existing world of images, whether by looking for a new image when so many old and accepted ones already exist or by actively creating images that run in opposition to history (Terence Davies, Michael Mann, Abbas Kiarostami,  Claire Denis, Jonathan Glazer, Clint Eastwood, Richard Kwietnowski, Johnnie To, Aleksandr Sokurov, Hal Hartley, etc.), or through it, finding new meanings or uses for traditions that already exist, whether in cinema or art or photography or television (Olivier Assayas, Takashi Miike, James Lee, Richard Kelly, Jean-Claude Brisseau, Pedro Costa, Tony Scott, John Woo, Neil Marshall, Richard Linklater, Abel Ferrara, David Mackenzie in Spread, Nicolas Klotz in Heartbeat Detector, etc.). But then there are those that do both (Brian De Palma, Alan Rudolph, James Gray, Steven Soderbergh, Arnaud Desplechin, Jean-Pierre Limosin, etc.), more often out of genius than indecision, and maybe the standout amongst them is Paul Verhoeven.

For instance, we can take the last shot of Black Book. The Verhoeven, like all of his movies, is agnostic: it affirms nothing except the need to doubt. The last image in Black Book affirms the history most would rather not think about. It goes against the images cinema's provided us with so far, but in order to go against something, it needs that history. This is related in a way to the effect of Inglourious Basterds, which is troubling because it excises the history most movies about the subject would like you to remember. Hitler without a Holocaust is just a buffoon. The two stills at the top of this post exist together in culture. Fighting these images in the present – you might as well try and block out the Sun. The image on the left: people and their history. The second image: people removed history become just characters. Violence stripped of context becomes just violence. Inglourious Basterds, that great big snipe hunt, is a war movie without a war, just people talking and then killing each other.

The problem of the image isn't gonna go away; if cinema's to survive, it has to get worse.  Now more than ever, I think, it's possible to equate cinema with music, in the sense that, in a world where everything makes a noise, where there are all of these sounds that surround us and that may hold significance in our lives (this may be someone's voice or even the noise of your car's engine, which becomes as familiar as a voice until you can tell its mood), it's a plain old song that can sometimes overtake you. The more noise, the more extraordinary music seems to be, and the same thing happens to cinema in a world where everything produces an image.

Further: Ryland Walker Knight's catalog of convergences and Frank Auerbach: Working After the Masters on YouTube.

What is the 21st Century? is the column where Ignatiy Vishnevetsky tries to find an answer to the titular question.