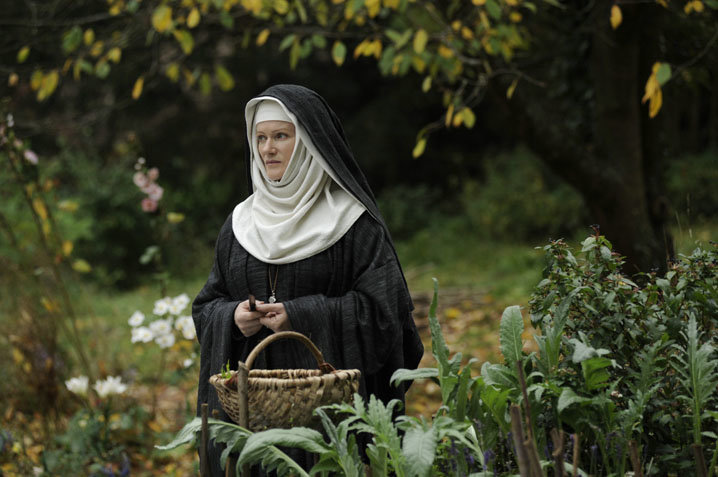 "The fifth collaboration of director Margarethe Von Trotta and actress Barbara Sukowa, Vision continues the proto-feminist canonization of Blessed Hildegard von Bingen (Sukowa), 12th-century Benedictine magistra, scientist, visionary composer, and literal receptor of visions." Nick Pinkerton in the Voice: "A bustling figure among ancient gray colonnades when not ill to extreme unction, Von Bingen is presented as prophet of a more modern and less gloomy faith, rejecting mortification and calcified prejudices, and so meeting tut-tut disapproval from catacomb-faced church elders.... Vision is more immediate and immersive when dealing in the jealous attachments among sisters; when circumstance and politics tear [assistant] Richardis [Hannah Herzsprung] from Hildegard, Sukowa's performance rears to towering heights of abjection."

"Jay Rosenblatt makes friendly art films," writes Mike Hale in the NYT. Their "appeal stems partly from their formal beauty. Mr Rosenblatt splices together bits of all kinds of footage — industrial and educational films, news, home movies — as seamlessly as any crack Hollywood editor.... The Darkness of Day, the main attraction of a five-film program of shorts beginning on Wednesday at the Museum of Modern Art, is a response to the suicide of a woman Mr Rosenblatt knew. The 26-minute meditation, with a soundtrack of journal entries and anecdotes, often pairs images and words in a way that could seem banal if it weren't executed so artfully." More from Michelle Orange (Voice). The Darkness of Day: Recent Films by Jay Rosenblatt runs through Monday.

Radical Light: Alternative Film and Video in the San Francisco Bay Area is an "ambitious ecology" that "encompasses an invaluable anthology of firsthand accounts, secondhand appreciations, and historical overviews; a film series with many artists-in-attendance and restored prints (through the winter at the Pacific Film Archive and various SF Cinematheque affiliates); and a gallery show of ephemera at the Berkeley Art Museum," writes Max Goldberg in the San Francisco Bay Guardian. "To first address the question underlying the whole series: why here? Some of the book's contributors offer fanciful conjectures: it must be the ghost of Muybridge, an island ecology, a city that won't hold a straight line, the quality of light, or, more realistically, the influence of the Beats' vow of poverty. While I'm attracted to environmental speculations like these, it seems important not to let them overshadow the essential evidence of hard work without promise of financial compensation or art world status. This is clearest in the Bay Area's rich tradition of artist-run, self-reliant screenings: museum takeovers, backyard hoedowns, and basement salons."

The book sees its official launch on Friday; the exhibition's on view through April 3; and the series runs through April 30. More from Jesse Hamlin (San Francisco Chronicle) and Jonathan Kiefer (KQED).

The Kids Grow Up, the latest doc from Doug Block, who may be most known for his 51 Birch Street, screens tonight at the Alamo Drafthouse in downtown Austin and Anne S Lewis talks with Block for the Chronicle.