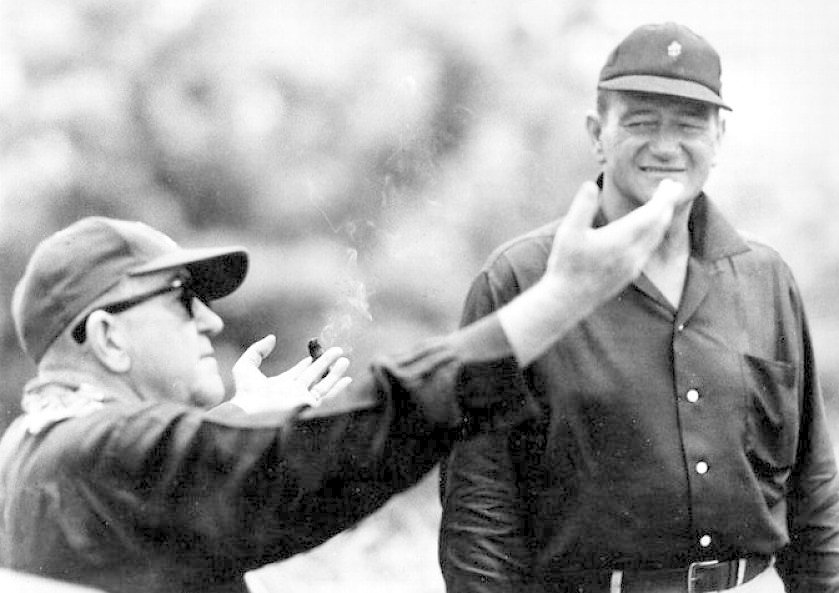 I got to experience an unexpected spectrum of American genre cinema here at the Viennale by yet again ignoring the new in favor of the old. Watching in a continuum Fritz Lang's Man Hunt (1941), in the Film Museum's retrospective, John Ford's Donovan's Reef (1963), programmed in the Viennale “for Jean-Marie Straub,” John Carpenter's The Thing (1982), shown in the retrospective sidebar “They Wanted to See Something Different” curated by Jörg Buttgereit, and Tony Scott's Unstoppable (2010) gave me an ellipticalt glimpse of the movement and address of a certain strain of popular American cinema from the middle of the 20th century to the present. 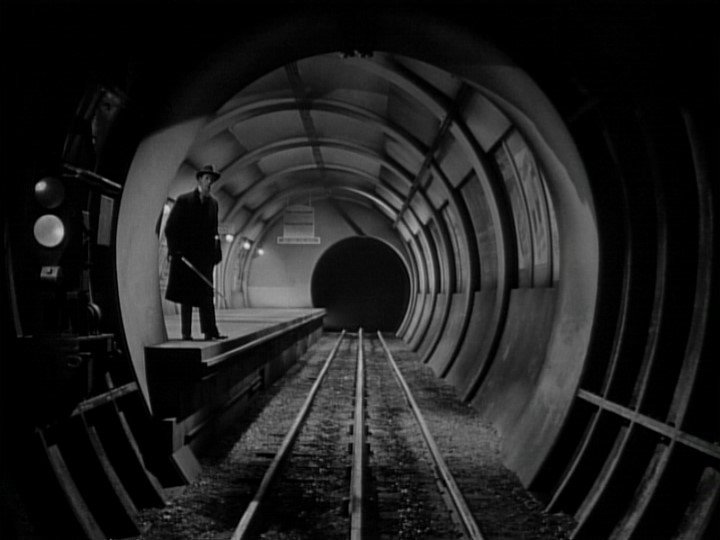 It would be foolish to take Man Hunt as a sort of pure example of Hollywood's industrial genre making of its time, unself-conscious; after all, Ford's own Stagecoach came two years earlier, electrically alive with awareness of the conventions of nearly forty years of the Western in cinema. But that film, like Lang's, which is an elaborately complex and utterly political, anti-Nazi, of-the-moment variation on Hitchcock's wrong man on the run films of the 1930s like The 39 Steps and The Lady Vanishes, addresses itself straight and true to its audience. That is to say, reflexivity may be a part of the film—George Sanders, as a head Nazi, practically shrugs directly at the audience, mockingly, when bringing up British attempts at appeasement with Germany—as it may be a part of the untold myriad of Hollywood comedies of the era that wink at the camera and invoke a watching audience, but the integrity of the fantasy world being created before the camera is something being believed in by its creators, and in turn, presumably, by the audience. It is telling us a story; Man Hunt is a wartime thriller invoking a wartime audience's imagination. 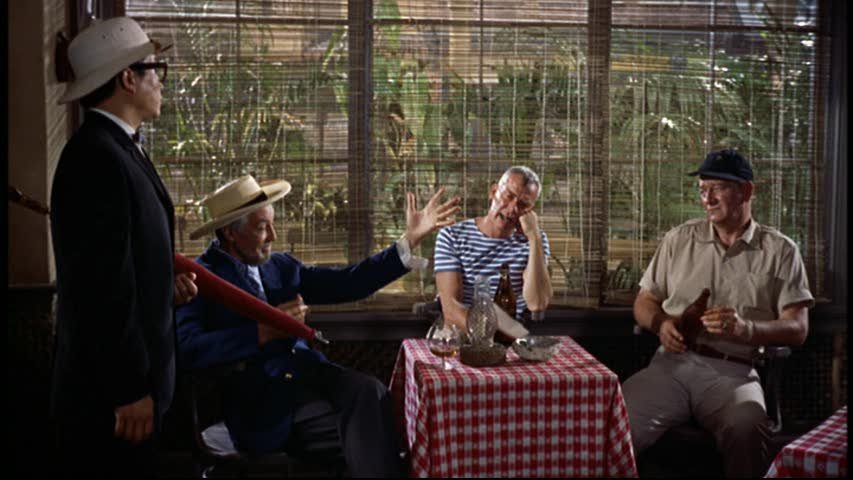 Twenty years later and now with John Ford at the helm of his last collaboration with John Wayne, and it no longer feels like one can so casually invoke a faith in cinema's collective fantasy, one big audience in one dark room sharing a celluloid whimsy. Donavan's Reef is indeed a fantasy—not the least of which in that it takes place on a multi-ethnic, multi-cultural island paradise where all people seem to do is dance, make love, brawl, get drunk and live happy–but not one we're supposed to enter into, believe in, potentially live imaginatively within, a rich storyworld of integrity and escape. Instead, like many late films by the Hollywood filmmakers most often inclined to create films out of a society, like Raoul Walsh and Howard Hawks for example, Ford's film feels like a re-enactment. It has a crystal clear artifice assembled from the recognizable remnants of what used to be a rip-roaring Hollywood production—the setting most resembles the short cycle of films in the early 1930s obsessed with the paradise of the South Seas—and re-staged knowingly by a bunch of old comrades as something false, the story half-written and half-assed, spawned from vignettes of chemistry, physicality and the inertia and facts of a film production. False, yes, but also beautiful: the warm haze of nostalgia and friendship glows off the screen as little attempt is made to disguise Donavan's Reef as anything but a lark amongst battle-scarred veterans who seem not to care about the end product, watched by an audience, and are completely invested in the dynamic of (re)creation on the set—that is, for the most part, on location, on an island paradise.

John Carpenter's admiration for old Hollywood genre making, especially that of Howard Hawks, is well known, and while his re-envisioning of Nyby-Hawks' The Thing from Another Planet in 1982 seems to exist squarely within the definition and era of postmodernity and pastiche, The Thing works a different tack. It does not have the supreme external self-awareness of, say, Walter Hill's Streets of Fire, and also seems far from the overt, shrug-like palimpsest of Ford's late picture. It certainly exists within a knowing continuum of what comes before: the startlingly taciturn lack of panic or real surprise in the horror film's first act is incredibly inspired, as if knowing the audience already assumes the worst, so why make a fuss, and meanwhile the characters in the story have their own eerie, nihilist analog to this, as if they well know the worst is likely to happen to them, isolated in an Antarctic base that feels less an outpost of civilization and more like its last surviving colony. (And since the group is all men, the instant acceptance of the horror that follows also has this sense of conscious resignation.)

There is a strong case for The Thing being of that horrible phrase today tossed around with capitalistic-consumerist aplomb, but here meaning something different: a reboot. Carpenter's film is not as much the next step along Hollywood's tormented post-Golden Age relationship between genre and audience—say, from Bonnie and Clyde to The Shining—as it is an attempt to address an audience anew, a recognition that something came before before it, not in the sense of quietly evolving or playing off of conventions as one would in Stagecoach, of shared recent knowledge of a medium's movements, but rather of a larger, longer cultural history of the cinema. The Thing not only presumes a hardened, consummate viewer from the start, but it projects this intelligence back into the film, allowing the people in the story themselves to work with a no-nonsense consciousness of the way the world works around them, and they in it, according to this large, shared reservoir of ingrained film history.

Thus something new to do, for those in The Thing, not John Wayne and Lee Marvin's human shenanigans, which themselves are allowed to be expressive in between brute physical movements, in replicated emotional bromides, but an unreflexive yet nonetheless entirely smart activeness within a fiction. This is far removed from the blasé, classical integration of the actor into the mise en scène﻿ of something like Man Hunt, which prominently features the ridiculousness of Walter Pidgeon, a good example of Lang's strange common preference (or weakness?) for the totally bland male as a super agent, where the actor's daft movement through the plot is axiomatic and unproblematic. His ability to spout the anti-Nazi wartime propaganda is thus no problem at all even if it's totally “unbelievable”: the fantasy of the world is so clear from the moment he steps in the frame (stalking Hitler for the sport of it!) that it is unquestionable. He isn't in the story, he is of the story, he is the story; one cannot separate Pidgeon from the film Man Hunt. Not until beers start frothing left and right in Donovan's Reef do we see a conscious disconnect for the viewer in what's supposed to be story and what's supposed to be, or supposed to be for, something else. In fact, I'm not sure that film even is for a viewer; it strikes me distinctly as being for the cast and crew (or at least certain key members), that the efforts behind and in front of the camera were for those spaces at the moments surrounding their creation, for those involved. Latter day pleasures in the film, like mine at the Viennale, may be because—at least it was for me—of this historic invitation to watch and be enmeshed in a long past camaraderie, friendship, work ethic, and a terrible and therefore hilarious sense of humor.

Living within the epoch of cinema that produced Unstoppable—released theatrically all but two years ago this fall, and delightfully brought to the Austrian Film Museum on 35mm for its non-Viennale series The Utopia of Film—it is far more difficult for me to determine in what manner Scott is addressing his audience. But this director is a unique case, at any rate; and he was nearly as old making this movie as John Ford was making Donovan's Reef. Visiting this film a third time (my second viewing, also abroad, inspired some notes) connected it strongly with Scott's Domino as a diptych on contemporary viewers living their lives (in the case of that earlier film) or relating to it (as in Unstoppable) entirely through media. By about the forty-five minute mark in the 2010 film, Tony Scott the director of the cross-cutting drama of an out of control train is sharing narrative control and exposition with “the media” which are “covering” the on-going catastrophe at the same time as Scott is the drama. We are constantly being shown how nearly every one not on the train—townspeople, concerned loved ones and even the professionals like the train company's corporate overlord—rely on the television's visual coverage and vocal exposition to understand and keep up with what is happening. If someone cut these sequences from the film much of its details and comprehensibility would be lost. Scenes with televisions in the background are intercut with television footage itself becoming part of the film's story, and what we see is a relationship of both the characters inside the film and of the film's audience to action, to storytelling, to human empathy that is totally immersed in and actually requires revelations and explanations to come from television screens and media authority.

Is this movement into an extra-cinematic space a step away from The Thing's re-invention, back towards Ford's weary dismissal of an ability, or a need, to conventionally fantasize? The catch is that Scott is hardly breaking the fourth wall—he presents it as entirely normal, if not already taken for granted, that both his characters and we the audience need the media to help make sense of, tell, and feel for Unstoppable's story. In fact, this address to us without winking, this combined sense of presenting a preposterous situation as entirely fantastically possible, strikes me as closer to Lang's Man Hunt. That film's anti-Hitler proselytizing feels as brazenly of-the-moment and therefore datable as Unstoppable's relentless interpolation of “Fox News” narration into its Denzel Washington star vehicle. The main difference between the two, nearly seventy years apart, is in how for Fritz Lang the image is power and powerful, and how obviously little Tony Scott ultimately trusts the image—but this could start a discussion we should leave for another time.