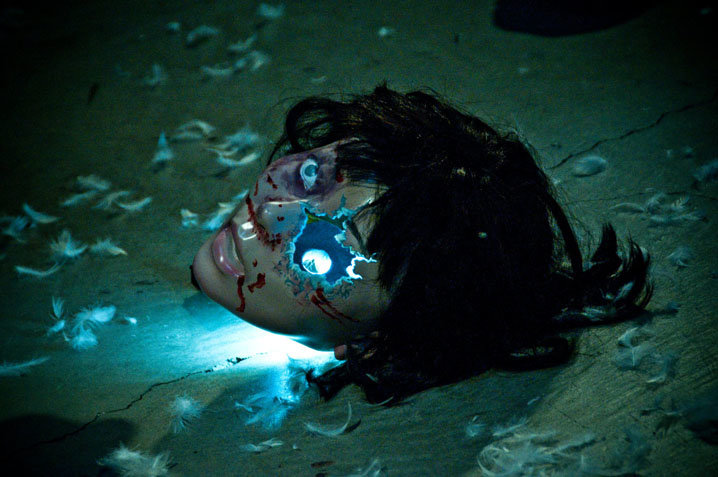 Now that we've had a look at the films in the official competition at this year's Venice Film Festival (September 1 through 11) — and Neil Young, by the way, is already placing odds on who'll win the Golden Lion — let's scan the titles screening out of competition, including films by the brothers Affleck, more Takashi Miike and a documentary by Martin Scorsese and Kent Jones.

Ben Affleck's The Town. See Tuesday's entry, where you'll find the trailer and notes among the first round of titles announced for the Toronto International Film Festival (September 9 through 19).

Casey Affleck's I'm Still Here: the Lost Year of Joaquin Phoenix. "It's far from the Joaquin Phoenix you're used to seeing onscreen," blog the Los Angeles Times' John Horn back in May: "snorting cocaine, ordering call girls, having oral sex with a publicist, treating his assistants abusively and rapping badly. And not, apparently, playing a role — or was he? Even after seeing the documentary I'm Still Here: The Lost Year of Joaquin Phoenix in a private screening earlier this week, film buyers still aren't sure of its genuineness." Update, 8/2: Matt Dentler's noticed that the PR machine's kicked in, at least in NYC. Update, 8/4: FirstShowing has the official poster.

Marco Bellocchio's Sorelle Mai. According to the synopsis posted at Cinemaitaliano.info, the film is comprised of six episodes of a story filmed with Bellocchio's students over a period of six years in Bobbio. Over time, we watch Helen, a girl of five, eventually turn thirteen as she grows up in the home of her mother's sister. An earlier version, then a work-in-progress — and who knows, maybe it still is — screened at the Rome Film Festival in 2006.

Emidio Greco's Notizie degli Scavi. The story of a middle-aged worker in Rome who develops a relationship with a prostitute who's attempted suicide.

Dennis Hopper's The Last Movie. "[O]f all the terrific, weird films made around the edges of Hollywood in that magic moment of the early 1970s, I think The Last Movie may be the best one I know," writes Zach Campbell. "Perhaps the real conflict of irreconcilable viewpoints upon which The Last Movie was constructed is that between old and new Hollywood," writes Brad Stevens for Sight & Sound. "But it is striking how Hopper's film contains none of that gleeful joy in the destruction of conventions one finds in similar works by European filmmakers, such as Jean-Luc Godard's Le vent d'est (1970) or Marco Ferreri's Touchez pas a la femme blanche (1974)."

Stefano Incerti's Gorbaciof. The story of an unscrupulous accountant who works in a prison.

Anurag Kashyap's That Girl in Yellow Boots. Synopsis: "Ruth is searching for her father — a man she hardly knew but cannot forget. Desperation drives her to work without a permit, at a massage parlour, where she gives 'happy endings' to unfulfilled men. Torn between several schisms, Mumbai becomes the backdrop for Ruth's quest as she struggles to find her independence and space even as she is sucked deeper into the labyrinthine politics of the city's underbelly."

Carlo Mazzacurati's Sei Venezia. Anybody? Mazzacurati's La passione is competing, but we don't know much about that one yet, either.

Takashi Miike's Zebraman and Zebraman 2: Attack on Zebra City. First, a reminder that Miike's 13 Assassins is competing. As for this pair: "The original Zebraman (2004) was a pleasant blockbuster-wannabe that gave V-cinema yakuza star Sho Aikawa a chance at starring in a big-screen, nationwide hit," writes Tom Mez at Midnight Eye. "Where the original film cast a sympathetic on otakudom and childish adults, its sequel — arriving six years later no doubt due to the hectic schedules of actor Aikawa, director Miike and scriptwriter Kankuro Kudo — explores the darker implications of adults avoiding their responsibilities in favour of pastimes they should have given up at the age of 18. Zebraman 2 is set in 2025, when Tokyo has become a totalitarian city-state renamed Zebra City, whose despotic mayor ([Gadarukanaru] Taka) shrewdly employs the entertainment industry and the media as propaganda tools. This is Guy Debord's society of spectacle made Orwellian flesh: the mayor's daughter Yui ([Riisa] Naka) is a pop star in the Britney Spears / Lady Gaga mould, who goes by the stage name Zebra Queen, has the masses at her feet and men salivating over her titillating videos and performances."

Oxide Pang and Danny Pang's The Child's Eye 3D. Dread Central: "Having brought us three Eye movies already, including the abysmal Eye 10 in which the spirits were fended off with farts (we kid you not), they're now gearing up for one more." Synopsis: "Stranded in Thailand by a political uprising and airport closure, Rainie and her friends are unable to return home. Reluctantly, they decide to stay in an aged and shabby hotel. Among them is Rainie's almost-breakup boyfriend, Lok; Ling and her brother, Rex; and Ciwi with her beloved boyfriend, Hei. The moment they check into the hotel, they come across three weird children and a puppy that seems slightly odd. As strange and sinister things start to happen, they begin disappearing one after another..."

Michele Placido's Vallanzasca: Gli angeli del male. Synopsis from Ioncinema: "Formerly titled Il Fiore del Male, scripted by Gerardo Amato, Michele Placido, Andrea Purgatori and Kim Rossi Stuart, this is based on the life of Renato Vallanzasca (played by Rossi Stuart), known as handsome Renè a notorious criminal who terrorized Milan in the 1970s. He has spent 38 of his 58 years in jail."

Gabriele Salvatores's 1960. Seems to be a documentary about the year he decided to become a filmmaker. His next project will evidently be an adaptation of Nicolai Lilin's Siberian Education.

Martin Scorsese and Kent Jones's A Letter to Elia. A doc some are describing as a tribute to Elia Kazan.

Takashi Shimizu's Shock Labyrinth 3D. Image above. From the Facebook page: "Japan’s first foray into the world of live-action 3-D feature films. The story follows a group of teenagers dealing with the disappearance of one of them, Yuki, at an amusement park’s ghost house. On a rainy day 10 years later, Yuki inexplicably returns. However, no sooner is she united with her former friends than she collapses, and the group rushes Yuki to a nearby hospital. But after checking in, they discover that things are not quite as they seem at the medical center. As the night wears on, the group sinks deeper and deeper into the events from a decade ago that led to Yuki’s disappearance."

John Turturro's Passione. A doc described at the IMDb as a "look at the musical roots and traditions of Naples, Italy, as well as its influence on the rest of the world."

While the film opening the festival, Darren Aronofsky's Black Swan, is in Competition, Julie Taymor's The Tempest (see Tuesday's entry) isn't. (Update, 7/31: indieWIRE's Eugene Hernandez reports that The Tempest will be the centerpiece presentation at the New York Film Festival, running September 24 through October 10.) There'll also be an opening night tribute to Bruce Lee, with a screening of Andrew Lau's The Legend of the Fist: The Return of Chen Zhen (again, Tuesday's entry) and an opening night midnight movie, Robert Rodriguez's Machete (see Wednesday's entry).

Screening as part of an homage to Vittorio Gassman will be Giancarlo Scarchilli's Vittorio racconta: Una vita da Mattatore. And the Controcampo Italiano section presents "new trends in Italian cinema."

Previously announced awards: the Golden Lion For Lifetime Achievement 2010 goes to John Woo, and the festival will be screening his Reign of Assassins. And as mentioned above, the Jaeger-LeCoultre Glory to the Filmmaker Award will be presented to Mani Ratnam, accompanied by a screening of the Hindi version of Raavan.