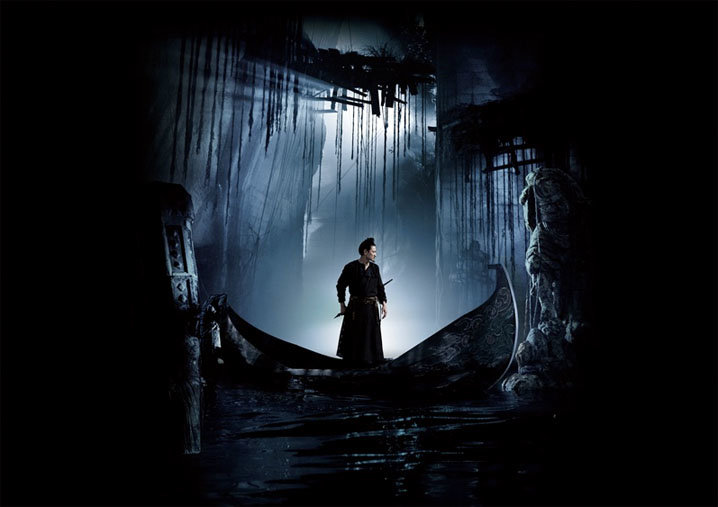 Following Round 1 on Tuesday and Round 2 yesterday (with the titles slated for the Orizzonti section), we now have the nearly-but-not-quite complete list of films lined up for the Competition at this year's Venice Film Festival. Here's a first round of notes, with updates to come.

Ascanio Celestini's La pecora nera. With Giorgio Tirabassi and Maya Sansa. Update, 8/1: "Memories and stories of those who lived in a mental hospital, a journey between the most fervid imagination and the reality of unspeakable fears." Another documentary/fiction hybrid.

Sofia Coppola's Somewhere. Site. From JoBlo.com: "Writer/director Sofia Coppola reunites with the film company with which she made the Academy Award-winning hit Lost in Translation. Her new film is an intimate story set in contemporary Los Angeles; Johnny Marco (Stephen Dorff) is a bad-boy actor stumbling through a life of excess at the Chateau Marmont Hotel in Hollywood. With an unexpected visit from his 11-year-old daughter (Elle Fanning), Johnny is forced to look at the questions we must all confront." With Benicio Del Toro and Michelle Monaghan.

Antony Cordier's Happy Few. Update, 8/1: The French synopsis, Googled: "Rachel [Marina Foïs] works in a jewelry store. When she meets Vincent [Nicolas Duvauchelle] in the studio, she is seduced by his outspokenness and decides to organize a dinner with their respective spouses, Frank [Roschdy Zem] and Teri [Élodie Bouchez]. The two couples barely have time to become friends; they fall in love almost immediately.... [T]he new lovers become inseparable. They argue in their blind passion, without rules and without lies. They [keep] theie secret [from] the children and everything continues, almost as before. But what binds them together is so strong that confusion [ensues]. The tangled feelings and issues are becoming increasingly cruel."

Saverio Costanzo's La Solitudine dei numeri primi (The Solitude of Prime Numbers). Based on the novel by Paolo Giordano, "a mesmerizing portrait of a young man and woman whose injured natures draw them together over the years and inevitably pull them apart," according to Richard Eder in his review for the New York Times. "That is the bare-bones summary, and just as misleading as attempting to use Mona Lisa's bare skull to configure her smile. The Solitude of Prime Numbers is neither psychological drama nor plight-driven melodrama. If anything, it is a venture into an undiscovered realm of astonishing shapes and colors."

Aleksei Fedorchenko's Silent Souls (Ovsyanki). Update, 8/1: From indieWIRE: "Fedorchenko's melancholy drama relates the journey of a man and his companion, who travel to a river with the remains of his companion's late wife."

Vincent Gallo's Promises Written in Water. Synopsis from Ioncinema: "The film is about a beautiful young girl who is terminally ill. She decides not to go to the hospital or have treatment but to wait until the pain becomes unbearable — and then to end her life. Her one fear is what is going to happen to her body when she is dead. She wants to be cremated. She reaches out to a photographer she meets, asking him to make sure that her wish is fulfilled. He takes a job in a funeral home so that he has the experience to perform the cremation. It sounds morbid in the extreme." The film's got its own topic here in the MUBI Forums.

Monte Hellman's Road to Nowhere. In a piece for the NYT back in May, John Anderson called it "enigmatic, elliptical, defiant of formula." It "possesses [Hellman's] almost perverse aversion to commerciality. Written by [Steven] Gaydos and starring Shannyn Sossamon (How to Make It in America), Cliff de Young, Dominique Swain and Tygh Runyan, Road may also be as significant to the indie feature as Avatar is to the popcorn movie: the entire film was shot on what is essentially a still camera (the Canon 5D Mark II), while looking like a mega-million Hollywood production."

Abdellatif Kechiche's Vénus noire (Black Venus). Variety notes that it "turns on a 19th-century true story of the tragic life of a South African tribeswoman, Sarah Baartman. Born with physical deformities, she ended up being exhibited as a circus freak in Paris."

Pablo Larraín's Post Mortem. Followup to Tony Manero. Twitch has a synopsis: "Mario, 55, works in a morgue typing autopsy reports. In the midst of the 1973 Chilean coup, he fantasizes about his neighbor, a cabaret dancer, Nancy, who mysteriously disappears on September the 11th. After a violent Army raid on her family's home, he hears about the arrest of her brother and father, a prominent Communist and Salvador Allende supporter.  Troubled and madly passionate over the loss of his would-be lover, Mario begins his frantic search for Nancy. Allende's government has been overthrown and people are dying in the streets. The Army seizes the morgue and numerous corpses pile up, but Mario can't get his mind off of Nancy. He carries out his job, thinking he might find her among the dead, in the silent hope that she is alive in a hospital somewhere. Mario walks through the streets like a ghost and one night, to his great relief, he discovers Nancy hiding in the attic of her home. He is delighted, feeds her, and fear prevents her from leaving her hideout. Then, from the military officer now in charge of the morgue, he receives an unexpected order - to go to the Military Hospital and write the autopsy report on an extraordinary corpse..."

Mario Martone's Noi Credevamo (We Believed). With Luigi Lo Cascio, Valerio Binasco and Toni Servillo. Update, 8/1: From Ioncinema: "Adapted by Martone and Giancarlo De Cataldo from Anna Banti's novel, We Believed recounts the lives of two young aristocrats and a young peasant who are involved in the republican struggle of 1828 - 1859, a resurgence of the Italian revolution that failed in its attempt to bring about the Republic."

Carlo Mazzacurati's La passione. Movieplayer.it has pix. Update, 8/1: From the synopsis at CinemaItaliano.info (and a bit of Google translating): A tragicomic tale of John Dubois (Silvio Orlando), a once-promising film director, now in his 50s, who finally has a shot at making it — perhaps his last shot. But he "finds himself the victim of an intricate web of blackmail caused [by] a big problem in building his home in Tuscany. Because of his clumsiness and his disorganization, [he] is forced to accept ridiculous demands and proposals that will lead him to suffer embarrassing and foolish compromises with bizarre characters, like the flamboyant ex-convict lover of the theater (Giuseppe Battiston), an actor without talent (Corrado Guzzanti), the beautiful bartender (Kasia Smutniak), the surveyor meddling in the country (Marco Messeri), the opportunist mayor 'entrepreneur' (Stefania Sandrelli) and dozens of other extravagant figures."

Takashi Miike's 13 Assassins. A "dead-serious samurai movie which seems to be a bit like The Dirty Dozen by way of Seven Samurai," suggests Slashfilm. Related: "A Decade with Takashi Miike."

Kelly Reichardt's Meek's Cutoff. From Aceshowbiz: "Based on the true story, experienced mountaineer Stephen Meek leads an ill-fated wagon train through a shortcut on the Oregon Trail, turning into a the tale that includes starvation, a legendary lost gold mine and a Native American scout who might or might not be inclined to save the day." More from Moviefraud and the Playlist. With Michelle Williams, Zoe Kazan, Bruce Greenwood, Paul Dano, Shirley Henderson and Will Patton.

Athina Rachel Tsangari's Attenberg. Starring Dogtooth director Giorgos Lanthimos. Ioncinema profiles Tsangari. Update, 8/2: Ioncinema now has a couple of shots and a synopsis: "Marina, 23, is growing up with her architect father in a prototype factory town by the sea. Finding the human species strange and repellent, she keeps her distance. Instead she stubbornly observes it through the songs of Suicide, the mammal documentaries of Sir David Attenborough, and the sex-ed lessons she receives from her only friend, Bella. A stranger comes to town and challenges her to a foosball duel, on her own table. Her father meanwhile ritualistically prepares for his exit from the 20th century, which he considers to be 'overrated.' Caught between the two men and her collaborator Bella, Marina investigates the wondrous mystery of the human fauna."

Tsui Hark's Detective Dee and the Mystery of Phantom Flame. Image above; this is an "epic martial arts mystery film that is a fictional account of Di Renjie, one of the most celebrated officials of the Chinese Tang Dynasty," according to the Wikipedia entry. "The film stars Andy Lau in the lead role, and features art direction and fight choreography by Sammo Hung.... When the mysterious deaths of a series of loyal subjects threaten to delay the 690 AD inauguration of Empress Wu Zetian, China's only female leader, she summons the infamous Detective Dee back from an exile into which she cast him eight years earlier."

Tom Tykwer's Drei (Three). Tykwer: "Three very different lovers find each other in Drei; the expectations bound up in role play and the problems inherent in assigning such roles have both playful and dramatic effects on the constellation. Sexuality and morality are drawn into an experimental war that at the same time evolves into an existential battle over how to comprehend one's own disposition with regard to sexual and social identity. Drei, then, is, shall we say, an associative narrative, a love story/drama/comedy." With David Striesow, Sophie Rois and Sebastian Schipper. Update, 8/2: The Playlist reports that Tom Hanks, James McAvoy, Natalie Portman, Halle Berry and possibly Ian McKellen are attached to Tykwer's next project, an adaptation of David Mitchell's Cloud Atlas.

Update, 8/9: The festival's announced today that Jerzy Skolimowski's Essential Killing, with Vincent Gallo and Emmanuelle Seigner "will be finished just in time for Venice," so they're adding it to the Competition lineup. Described as a "provocative thriller," the film "tells the story of an Afghan man, captured by American forces in Kabul, who finds himself transported to a nameless European country. He manages to escape into the vast frozen woodland, a world away from the desert home he knew. Forced into extreme survival mode, he must kill anyone who strays into his path."