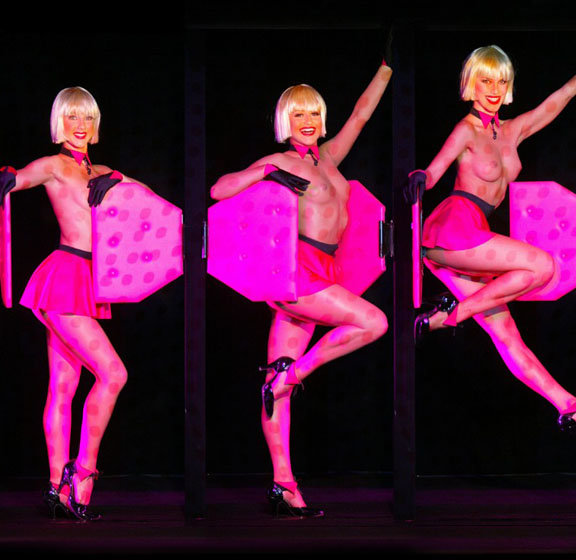 "Frederick Wiseman is the deep-cover anthropologist of American cinema," begins the Guardian's Xan Brooks. "Over a 50-year career his documentaries have hidden out in the wings, playing quiet witness to the workings of various social institutions and inviting the viewers to draw their own conclusions. Wiseman has visited schools and hospitals, the Ballet de l'Opera National and the Idaho state legislature. But the spry, reflective Crazy Horse catches him on more ostensibly exotic ground, backstage at a Paris cabaret, purveyor of reputedly 'the best chic nude show in the world.' Very gently, Wiseman disrobes the spectacle and peers inside."

The "catalyst" for the new film, notes Variety's Jay Weissberg, is "Crazy Horse's new show, directed and choreographed by Philippe Decouflé. Wiseman shows old numbers alongside the new, and the difference is striking: An old-fashioned staging like 'Baby Buns,' where pink polka-dots are projected onto the dancers' naked flesh, has a silly de-eroticized quality that Decouflé is obviously keen on replacing. His style is more modern and arguably more sensual, though he, too, turns the female body into an abstraction whose power to titillate will very much depend on individual viewers' tastes. In many cases, numbers are shown with the dancers' heads cut out of the frame, the focus firmly on torsos and buttocks. Feminists will be outraged by this piecemeal treatment, and at times it's difficult to tell how much is the actual staging and how much is Wiseman's viewpoint. An especially hilarious number — equal parts disturbing and funny — has the women dressed in bearskin hats, harnesses and tails attached front and rear, turning them into horse guards and horses all at once."

"[S]ome of the curious who will imagine they're in for a prurient, sexy collection of strip tease acts, might end up being disappointed," warns Screen's Dan Fainaru. "To prevent any possible misunderstanding, there are plenty of girls in the buff parading through the film — they are all beautiful, perfectly built, unselfconsciously naked and thoroughly dedicated to their profession, despite its nature. They may not be prima ballerinas, but they certainly are first class gymnasts capable of the remarkable physical contortions they are required to perform. However, if you expect them to embark on introspective interviews and revelations about their intimate nature and their eventual reticence to disrobe every evening before an audience, forget about it. That's not the subject of this film. It's more about how hard everybody works to put together the show and how much effort is involved in it."

In her review for die taz, Cristina Nord notes that artistic director Decouflé actually dreams of touching the subconscious of the audience, "just as films by Federico Fellini and Rainer Werner Fassbinder once did."

More from Vittoria Scarpa at Cineuropa.

Update, 9/6: "Over the last decade, I've realized that Frederick Wiseman devotees are incapable of critical thinking when it comes to their master," writes Cinema Scope editor Mark Peranson. "They fail to see (or refuse to acknowledge) that in composing his career-long grand narrative analysis, Wiseman sometimes loses sight of the particularities of the institution under observation; at times, he's been just plain lazy as an editor. To what extent his unofficial status as the chronicler of American life has weighed upon him as a burden I can't say, but my complaints disappear into the shadows in Crazy Horse, his 39th film, and, for my money, the most entertaining movie he's ever made. Maybe this has something to do with Wiseman's differing takes on the American and French nations. Put another way, America for Wiseman is high school, legislature, public housing, hospital, the army; France is the Comédie Française and strippers."﻿

Update, 9/18: "There's no backstory at all, which proves frustrating when the dynamics of running the club and creative control are at issue, which is often." Todd McCarthy in the Hollywood Reporter: "Most disappointingly, the dancers never get their close-ups; whether by choice or by some enforced arrangement, Wiseman doesn't approach the gorgeous women to give them the chance to tell their side of what it's like to work at the Crazy Horse, if this is something they dreamed about, how it effects the rest of their lives, how people perceive them and so on…. What Wiseman seizes, however, is the opportunity to create an impressionistic portrait of a highly rarified realm, a tiny sanctuary from real life where the refined expression of sensuality, eroticism and, as per the name of the new show the film documents, desire is the be-all and end-all."﻿

Venice 2011 Index.﻿ Crazy Horse opened Venice Days and will screen in the Real to Reel program in Toronto, at San Sebastian, and as a Special Presentation at the New York Film Festival. Then, it's on to New York's Film Forum in January.﻿ For news and tips throughout the day every day, follow @thedailyMUBI on Twitter and/or the RSS feed.﻿