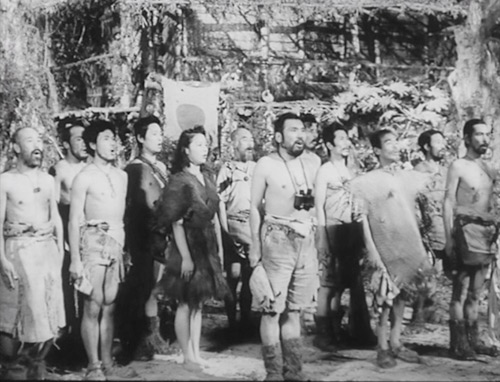 Josef von Sternberg's The Saga of Anahatan announces itself as "a postscript" to the Asian portion of World War II, and for many years the film itself has been regarded as a footnote in Sternberg's own career. This has to do at least in part with its rarity. It isn't so rare that it's been entirely possible to see. At the press conference for the 2009 New York Film Festival's screening of Independencia, director Raya Martin's proclamation that Anatahan had been a major influence on his film had a lot of the Bright Young Things of film writing scratching their heads. Point being, you know, that the not-yet-30-year-old Martin has been able to actually see the film. Although one gathers that he did so in an academic context, which now and then provides opportunities that our local repertory cinema doesn't. In any event, a recent French DVD release of Anatahan makes the film more accessible than it's been in recent memory, and looking at it for the first time in some time, it's the film's strangeness that defines its putative inaccessibility.

In a typically superb essay on Sternberg, Tag Gallagher quotes a line of narration Sternberg intones in this very film: “The only enemy most of us really have is lonesomeness." Gallagher goes on to note that "[Sternberg's] people inhabit isolated universes." One is tempted, coming upon this observation, to start citing examples from earlier in the director's career—the court in The Scarlet Empress, the train in Shanghai Express—but the point here is that the universe of Anatahan is the most radically circumscribed of all of Sternberg's isolated universes. It is an island, a volcanic island, where a group of Japanese soldiers finds itself stranded after evading the enemy and refusing to believe that they've been defeated. The site of a former plantation, its only inhabitants the comely young woman Keiko (Akemi Negishi) and a man who is...her husband? Her keeper? Her uncle or father? It's never made abundantly clear, but it is interesting to note that the actor playing Kusakabe, Tadashi Suganuma, has a more than slight resemblance to the young Sternberg, moustache and goatee and all. And just as the soldiers, Keiko, and Kusakabe roil in isolation, so to is the viewer held at a kind of confined remove. While the characters all speak Japanese, there are no subtitles translating the action. Rather, everything—the words of the characters, their thoughts, certain offscreen actions, and so on—are filtered through the English-speaking narrator, the director himself, speaking in gruff, Brooklyn-inflected tones that constitute one of the more irrational alienation effects of this supposedly very Asian tale. 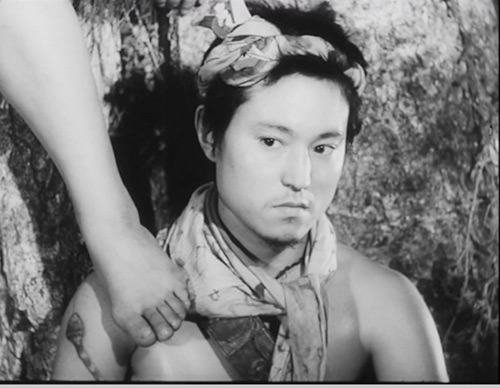 That a good deal of sexual tension mounts throughout this picture is a bit of a given. And it's resolved in fairly violent ways, ways that Sternberg largely declines to depict. Instead, he'll show us a little monument in a burial ground, decorated with a souvenir from the life of the deceased party. In the meantime there are gestures and layers of visual elements commenting on the gestures. As when Keiko, relaxing on a rock formation that's the locus of the island's social gatherings, rests her foor on the shoulder of one of the shoulders. His tentative look says one thing; the snake tattoo on his right arm says another. Will he go to her tonight? And if he does, what will happen to him? One of the film's plot points is the discovery of a downed American plane, the cargo of which contains two working pistols. The soldiers claiming those pistols bring a shift to the balance of power on the island. But almost all victories achieved by the men in this scenario are pyrrhic. They have to be, in a sense, because their tenure on the island is a sign of ultimate defeat. (Interesting to note that the device of a wrecked plane containing weapons also occurs in Buñuel's 1956 Death in the Garden, adapted from a novel by José André Lacour.) 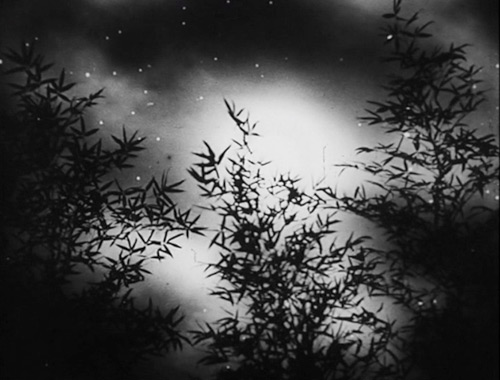 And all the while the fake sky looks down on the folly of these humans. 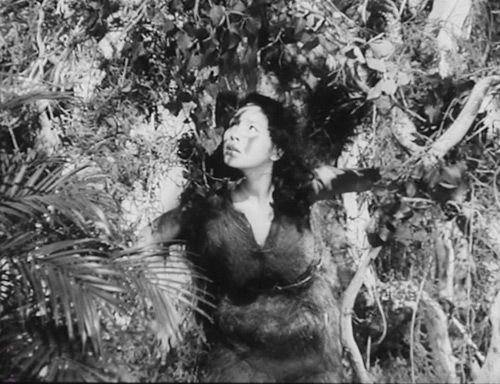 The big influence Anatahan seems to have had on Martin's Independencia, in the event that you were wondering, is in being deliberately set-bound. Although Sternberg travelled to Japan and hired Japanese actors to enact the scenario he had based on true events, once in Kyoto he eschewed "realism," as usual, and built his lush jungle island setting on a soundstage, at great expense. "A more extreme degree of stylization is impossible to imagine," critic Dave Kehr rhapsodizes; "the Pacific island setting was re-created entirely in a Japanese studio out of cellophane and paper (Sternberg complained that he was forced to use real water), and the actors who perform this tale of shipwrecked sailors are Kabuki-trained[...] Distance is built into every aspect of the production." Similarly, the jungle hideaway Martin conjures for his self-exiled characters in Independencia is a self-proclaiming construct. 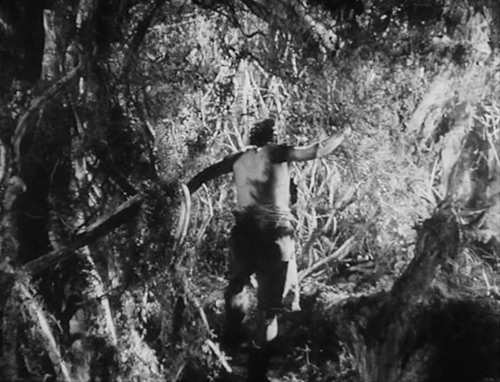 Sternberg's film is a law and a world unto itself, and watching it is an immersion into many things, including a filmmaking mode that seems to be receding fast. The bare-bones DVD from the "Collection Auteurs" of the similarly sometimes elusive label Films Sans Frontieres (presented, as ever by Galeshka Moravioff), features a print that's in pretty solid shape except for in the real breaks, wherein picture and sound undergoes some unpleasant but brief garblings. Essential in any event.