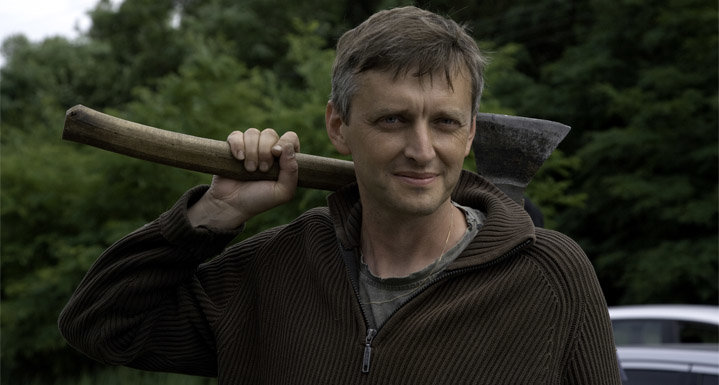 I wanted to talk to Sergei Loznitsa about time because My Joy (which Daniel Kasman wrote about in this year's Cannes coverage) begins with a body being thrown into a concrete mixer and then there's a truck driver lost in a Russian backwater and then a prostitute and then a scene set over half a century earlier and none of these changes represent detours or dovetails, but a continuous forward movement through a "time" (cinematic / historical / narrative) that is folding in on itself. My Joy is an anti-psychological film in the sense that, instead of portraying time the way its characters see it, it portrays its characters as they are seen by time: as echoes. But of course there were other questions as well—about his background as a documentary filmmaker, about his next feature, about the presence of a couple of prominent Romanian New Wave figures in his film—which the erudite Loznitsa, who holds a degree in mathematics and engineering (and once worked at an artificial intelligence lab while moonlighting as a Japanese interpreter), had no problems answering.

SERGEI LOZNITSA: I studied in the fiction film directing program at VGIK. Fiction films are what I've wanted to make for a long time. It so happened that I began by making documentary films, in part because I didn't really understand at the time what it was that I could make movies about, and what cinema itself was. My student film—which was my diploma film—was a documentary. It has no words, only images, sounds and music. We put a camera in a window and filmed a construction site.

NOTEBOOK: I wanted to ask you about a short film of yours from 2000, The Train Stop. It was the first film of yours that I saw—it was shown in Chicago a few years ago. I've never been able to figure out if you shot the movie in one evening, or in a week.

LOZNITSA: It took a year to shoot that film.

NOTEBOOK: A year? Did you shoot it all in the same station?

LOZNITSA: The cinematographer, Pavel Kostomarov, and I happened upon this train station by accident. We were travelling by elektrichka from Moscow to St. Petersburg. In Malaya Vishera, which is about 150 km before Petersburg, the elektrichka service ended. We had to go out on to this snow-covered platform in 30 below weather. There was nowhere to go—the town is tiny. A path on the platform lead us to this little building with one door and no windows. That was, at the moment, the station. In the "waiting hall," which was about five meters by five meters, there was a lot of people. There were sitting on the benches, on the floor, standing. We found our place on the floor in a corner. And that's where the film began. It's a very strange feeling, to be around this big mass of sleeping bodies. The trains would fly past—roaring—and then there would be silence. That moment, and the feeling of it, was what I wanted to recreate. Then we would come back there every two months for three-five nights at a time. It would have been possible to shoot all sorts of the different movies there, but that's the one I ended up shooting.

NOTEBOOK: How did the people react?

LOZNITSA: The people—well, what about the people? Sometimes they showed interest. Mostly they were too worn down by life to care about crap like a camera. Criminals, when we they'd show up, would ask us not to film them. The rest were calm and understanding. We'd show up in the waiting hall in the evening and set up the camera right away. That way everybody had time to get used to it.

NOTEBOOK: Did all of your documentaries take that long to shoot?

LOZNITSA: Not all of them. Some movies took a month to shoot. Others took three months. It changes. You can make a film in one day. It depends on the subject or the idea. Settlement took 2 months. Factory took two weeks.

NOTEBOOK: A location—specifically the character of a location—is that a subject that interests you?

LOZNITSA: What interest me is the possibility of realizing thoughts with the resources that make up cinema. The rest is secondary.

NOTEBOOK: First the thought, then the film?

NOTEBOOK: And when you're not shooting a documentary, when you're working on a screenplay—do you work the same way?

LOZNITSA: Well of course. Everything starts with an impression. How can you think about something you have no impression of?

NOTEBOOK: What impression did My Joy start with?

LOZNITSA: There's an accumulation of many different impressions. After all, I've been driving through the provinces since 1997. I shot almost all of my films there. You'll meet a traveller. Look him in the eyes. Hear his story. It's all very simple.

NOTEBOOK: What about the "historical" parts of the film?

LOZNITSA: Those are all stories, too. Local folklore.

NOTEBOOK: To slightly change the subject: the film was shot by Oleg Mutu, and Vlad Ivanov appears in a role. Both of them have worked with Cristian Mungiu. Was this an accident, or are you interested in those new Romanian movies?

LOZNITSA: I actually spoke to Cristian recently on the phone. But of course it was both accidental and intentional. I happened to see 4 Months, 3 Weeks and 2 Days and decided to invite the cinematographer [Mutu] to the project. And then I invited the actor [Ivanov]. Oleg Mutu is a wonderful cinematographer, and Vlad Ivanov's a great actor—that's why I wanted to work them.

NOTEBOOK: Ivanov was dubbed, though, right?

LOZNITSA: We dubbed Vlad, though he did his lines in Russian. His accent would still sometimes peek through. There is one line of his that remains in the film—it's a scream, "No!," at the end of the film. That is Vlad's voice.

NOTEBOOK: I've heard that you're currently working on a film about Belarusian partisans.

LOZNITSA: Yes. It'll be adapted from a story by Vasili Bykov called "In the Fog."

NOTEBOOK: Will you be shooting it in Belarus?

LOZNITSA: I'm not sure. Right now we're still looking for locations. Over the summer, I went to Belarus, Lithuana and Latvia. In October, I'll be going to Poland. Then I'll see.

NOTEBOOK: Your film about the Lenigrad blockade, My Joy, this new project—how do you see the relationship between history and the present?

LOZNITSA: The present, the past, the future—these are all abstract ideas. The formula for time suggested by Tsiolkovsky [1] is t=0. Time does not exist.

NOTEBOOK: I'm asking because to me it seems like, in My Joy, you're showing how there's no difference between the past and the present.

LOZNITSA: That's what I mean. Life consists of the present moment. Everything else occurs in a conceptual, abstract space, and is therefore impermanent and not reliable, both in the literal sense, and in the sense of its authenticity. The paradox is that it is only possible to see the whole by taking it apart in the form of reflections within an abstract space—but the authenticity of the whole disappears in the process. It is possible to the see the whole of a moment in other ways, but those ways are individualized and unrepeatable.

NOTEBOOK: Do you think that cinema—and the way a film image can "withstand" history, like the archival footage in Blockade, for instance—is best equipped for this idea?

LOZNITSA: What do you mean by "withstand?"

NOTEBOOK: I mean that the images don't age.

LOZNITSA: Do you mean in the physical sense? They age—they sure do. Film goes bad. You have to store at specific temperatures.

NOTEBOOK: In the physical sense, yes, they age.

LOZNITSA: Then in what sense don't they age? Aging is the process of wear and decay, right?

NOTEBOOK: Those little moving pictures are always viewed in the present. A shot of a man walking down a street: the shot could have been made 60 years ago, but the man walks across the street in the present tense when it's on a screen.

LOZNITSA: You could say that the ideas age. They do in the sense that we don't realize at the moment that what we're thinking may be wrong. In that case, we need to take the films apart—if it's films we're talking about here. A film can "age"—though for me this is sort of a ambiguous term—while the "image" itself isn't affected by the process. This is true.

NOTEBOOK: I mean "the image," then. The ideas change, the actual film rots. But something within the image is not affected by it. Something remains in the present tense. And because film is in the present and past at the same time, it's well-equipped to show the lack of a boundary between the past and the present.

LOZNITSA: I think that it still changes—maybe to a lesser degree than language—but it changes. The process of aging is tied to us. That's the root of it. Our relationship to the image—that's something worth investigating.

NOTEBOOK: Serge Daney had this phrase about how cinema was like the rear-view mirror in a car. You see the car going foreward, and at the same time you see the landscape disappearing behind it.

LOZNITSA: Well that is such a beautiful phrase. But I think it's dangerous to get lost in the debris of these beautiful images.

NOTEBOOK: Do you think about that when you're making a film—about the relationship to the image, and how that relationship can change?

LOZNITSA: The image itself doesn't matter. On its own, it carries no significance. What matters is a pair: the image and the viewer. What matters is what happens in the moment of viewing. But I don't think about that at all when I'm making a film. It's a different position, another point in space ... Do you think about breathing when you breathe?

NOTEBOOK: Of course not.

LOZNITSA: Well, here the choice is that you either think or you breathe.

[1] The father of rocketry, Loznitsa and I all share a birthday: September 5.