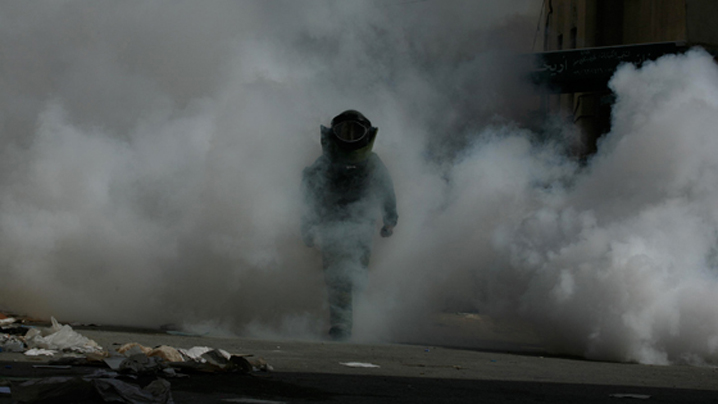 Above: danger all around in The Hurt Locker.

Who is more vulnerable, the man inside the “bombproof” suit, or the men outside it? The Hurt Locker, Kathryn Bigelow’s first theatrical release since K19: The Widowmaker, sees the bomb diffusers’ protection as nearly irrelevant. In contemporary warfare, you are vulnerable just by being there. But the illusion of safety is key, so the Armymen of The Hurt Locker work in three man squads, one man being the team leader and the man-in-the-suit, Sgt. James (Jeremy Renner), and the other two being his overwatch, gunmen making sure the surroundings are secure, Sanborn (Anthony Mackie) and Eldridge (Brian Geraghty).

The men hole themselves up into their tight, singular squad; the rest of Iraq, the rest of Baghdad, the rest of the Army doesn’t exist outside of the men and the bombs they are sent out to eliminate, isolated calls to action that the film structures in a series of vignettes. Every time these three men interact with somebody outside the group, the outsider—be it a local Iraqi child that James bonds with and inevitably sees in more dire circumstances later, or an Army doctor who is worried about Eldridge’s combat stress—seems absurdly caricaturized, too melodramatic, broad, and heavy-handed. Indeed, sections in-between bomb diffusions invariably register as false—until it is just the three isolated men fighting, drinking, and interacting with one another, and the illusion of their camaraderie, its fragility, brings back the realism. As in HBO’s recent mini-series Generation Kill, the focus in The Hurt Locker is hard-earned, strict military realism, in terms of both style and the candid, straightforward, episodic narrative. Anything outside the professional activity of these three men pales in meaning and, sadly for the film, in conceptualization and execution, when compared to the swift, expert evocation of their turbulent, highly exposed, and tightly team-reliant action in the field.

The action takes up the bulk of The Hurt Locker, the vignettes chronicling the various disturbing ways James, Sanborn, and Eldridge are put in danger, and their ability to cope, make decisions, survive, and kill are put to the test. They seem ejected into a wilderness of vaguely defined threat, and have to survive by keeping themselves intact as individuals and as a team—yet when it comes down to it, as with their protective suit, the systems of reliance more often than not are there mostly as comforting factors, and the lesson is that death is all around and unstoppable.

The filmmakers wisely avoid turning The Hurt Locker into a which-color-wire-to-cut piece of clichéd suspense, and instead masterfully orchestrate each action vignette with its own dynamism of exposure and worry. Post-Vietnam war films have upped the degree to which the audience is aware of the constant vulnerability individual soldiers have to haphazard combat threats such as sniper fire and booby traps, and Bigelow exploits this new convention and awareness to the max, working the angles so that it is almost never the bomb which might kill the squad, but threats lurking always elsewhere, be it on the outside, with the button pushers and trigger men, or on the inside, where Sgt. James’ addiction to the adrenaline of combat puts the squad at reckless levels of risk.

The film opens with the most conventional of the diffusion situations to set the standard, and then deviates successfully with each vignette. In one particularly biting sequence, even the action of a man simply videotaping the squad’s activity carries the frightening possibility that these bombs aren’t even real, that they are there to trap the squad, put them under observation for enemy tacticians. The film’s most brilliant moment is a central sequence where the squad gets pinned down by rockets and snipers while trying to help an English squad (led by Ralph Fiennes), and the threat is no longer the closeness of the bomb but rather the distance of the enemy. This sequence is The Hurt Locker in a nutshell: a small group of men, sort of friends, sort of teammates, but aggravated, fatigued, and their bonds stretched to breaking point, permanently stuck in a physically and mentally trying siege where danger is prevalent and multi-directional but almost invisible. The suit does nothing, the unity of the three-man team is faced with 360-degrees of threat, and there is no direct mission other than to survive. Bigelow pushes it even further as well, playing with the close quarters tension she creates with the other bomb sequences and here flipping it on its head, showing us the effect that killing at a distance has on soldiers, the unease of taking the time to sight your enemy in the distant haze, to miss and miss and finally connect at such a great delay and such a very great ways away.

From here the movie gently takes a turn downhill, relying on outsiders to assert unnecessary character arcs in broad ways—as if watching men struggle through combat wasn’t narrative enough—but by now The Hurt Locker has already set its stance as a frighteningly exhilarating, candid piece of genre cinema, looking at just how isolated and vulnerable soldiers really are in modern war.