Ah, Tsukamoto's Fires of the Plain! I liked this film very much, the director-actor-editor-cinematographer's baby-faced soldier hysterically pushing through an unforgiving jungle, unforgiving war, unforgiving humanity, slushy digital shades of the surrealism in Herzog's under-appreciated Rescue Dawn and Buñuel﻿'s Death in the Garden.

I have still more to tell of the shorts in the experimental Wavelengths sections, so please excuse my continued digressions away from the features you are seeing (and I too, but am leaving to your choice words!). Two of the best features I've seen, Christian Petzold's tremendous post-war German theoretical thriller Phoenix and Lonnie van Brummelen and Siebren de Hann﻿'s rich, generous Episode of the Sea, I'll save for another time.

Something a bit more documentary than avant-garde closed the third Wavelengths shorts program, Rebecca Baron's Detour de force. This found footage film pulled from the University of Maryland archives organizes and narrates a story through 16mm, Polaroid, and video records from the 1960s of experiments with Ted Serios. For those like myself unfamiliar with Serios, the beginning of Baron's film is exceedingly odd: official looking men and one very unofficial, who will later be revealed to be Ted, playing with camera gizmos and particularly an early Polaroid instant camera. Ted convulses himself, and the others, straining to get some proper angle, document it, and behind them are watching 16mm and television cameras. What is this, records of performance art? No: Ted Serios may have been psychic, able, as these doctors surrounding him try to test, to expunge images from his mind onto the negative in the portable cameras. Baron's studious but still awe-struck revelation of these amateur testing scenarios, cannily using the latest recording technology to try to document, prove, and understand this inhuman phenomenon, despite the scientific impetus behind the records achieves an uncanniness as in much old or amateur footage of that which cannot be explained. Sometimes—often, even—a camera's presence only serves to further mystify rather than reassure.

Two other films spread across Wavelengths re-enforce this maxim. Eric Baudelaire's feature documentary Letters to Max has a soundtrack of Maxim Gvinjia, the former Foreign Minister of Abkhazia﻿—a small breakout nation from Georgia only recognized by a handful of other countries—responding with a wonderful intimate friendliness and generosity to terse, inquisitive letters which the director attempts to send from Paris to this barely-a-nation. The images make up a travelogue/diary of a Abkhazia﻿, including footage of Gvinjia, which plays without direct connection along with Gvinjia's spoken responses to the letters, his reflections on his life, Abkhazia﻿'s war with Georgia and its attempts of independence and recognition.

What came to my mind was that this is a real life example of Nicolas Rey's experimental nation-and-landscape film evoking a fictional, imagined country, differently, Molussia: how the disconnected combination of descriptive, ruminating voice-overs and uncontextualized imagery creates a third thing, an illusionist unified sense of land, of nation, of politics, of history and character. This construction isn't just some meta-gesture of the film, however, as it takes the shaky "existence" of the nation called Abkhazia﻿ as something difficult to see and to create in reality just as it is in the film, but something indeed that can be constructed, at least in part, through this kind of description. Movingly, the description isn't distanced but very personal, these warm letters of friendship.

(There is a strong kinship in this cinema of displacement and reconstruction between Baudelaire's film and Le beau danger, René Frölke's Wavelengths feature﻿ about the concentration camp survivor, Romanian citizen and now exile, and author Norman Manea﻿, which Michael Sicinski evokes so well in his piece. Yet both of these films, I feel, tend to have too many superfluous images, too many unspecific and unmoored, not just disconnected as intended, from the subject, the texts, the voices and sound. Many moments in both would have benefited even from more blank scenes than these "extra" images.) 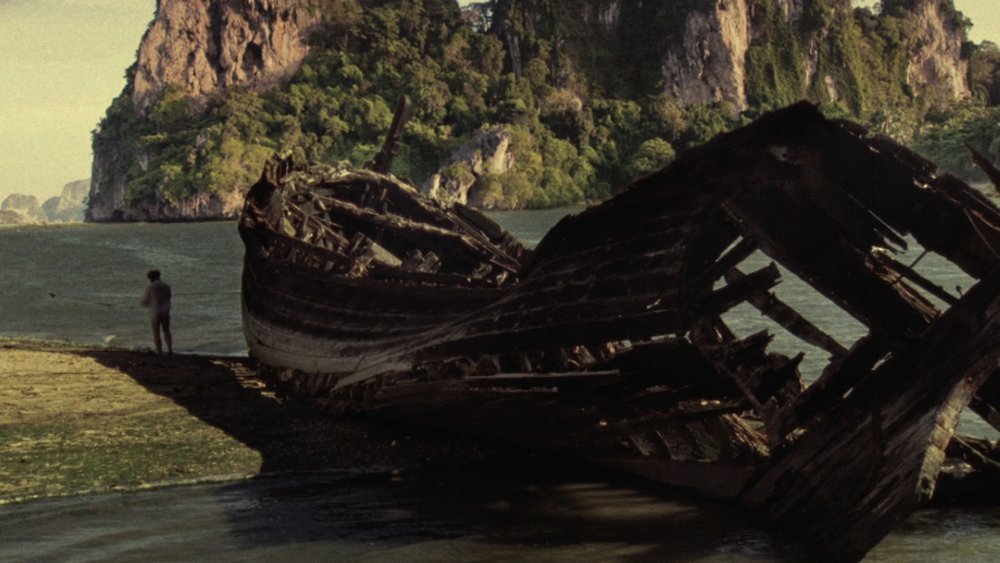 I have two more sets of Wavelengths shorts to tell you about Fernando, and then I'll move on. The first was a beautifully curated trio of Portuguese films, two by young artists—Joana Pimenta's The Figures Carved into the Knife by the Sap of Banana Trees and Gabriel Abrantes﻿' Taprobana—which bookend one by the "old man of cinema," master Manoel de Oliveira's The Old Man of Belem. All three, each in their own way, conjure Portugal's past in terms poetic-mysterious (Pimenta), wryly erudite and century-spanning (Oliveira), and ribald and irreverent (Abrantes). Postcards from Madeira and Mozambique cryptically dance around the elusive imagery and ornately detailed sound of The Figures Carved..., the first film in the program. Oliveira then re-orients the text theme to a heavenly meeting between three great authors of Spain and Portugal, 16th century writer Luis Vaz De Camoes﻿, the 16th-17th century's Cervantes, 19th's Camilo Castelo Braco﻿, and the 19th-20th's Teixeira de Pascoaes. They each comment upon the others' writing and their imagination's nations and history, using Oliveira's regular actors in their usual powerful declamatory readings, complimented by choice clips from Oliveira's Camilo adaptations—at least Day of Despair, about Camilo himself, but possibly also Doomed Love or Francesca—as well as Grigori Kozintsev's 1957 Quixote film. Abrantes picks up the Portuguese national author thread by focusing on Camoes' exile in Goa, part sexcapade, part fugitive tale, where he composed his epic poem The Lusiads. From the elegiac detective atmosphere of The Figures...to Oliveira's living authors and filmed dreams, through Abrantes' delightfully Pasolini-esque, impudent anti-colonialist fantasy, this short film chain was one of TIFF's most fruitful programming coups.

Lastly, we were gifted a lunar evening for the closing Wavelengths shorts program: Nearly in its full phase, the moon seemed to look over, if not inspire, nearly all of these final films. My favorites were the bookending shorts, Malena Sziam's Lunar Almanac and Sylvia Schedelbauer's Sea of Vapors. Sziam's bubbly nocturne of moon shapes dancing across the night-dark image—edited in-camera, including overlaying different phases upon the same background to combine nights and views—is an ode to a shining emblem of distance and loneliness, but one that is a constant, peering presence of serenity and glowing luminosity. Sea of Vapors is far denser and more hyper-active, taking something like Ken Jacobs's stutter-step rapid-fire editing of two images to create a false sense of animation, motion, and propulsion. Schedelbauer is using this technique to transition between images as well, so the chiaroscuro pulse (as Sicinski characterizes it) not only agitates single object-photographs (or footage, it is difficult to discern) but shudders us through the images, a journey which moves through a forest and culminates in white bowl quivering in existence between itself and, of course, the moon. The soundtrack is a bit too overwhelmingly droning towards a generic spirituality, something the nervous, transformative motion of the ever-twitching images barely needs to turn them into a kind of incantation.

The irritating, somewhat needy TIFF slideshow before many films here proclaim that the organization "brings the power of film to life," but ﻿the best films I'm seeing, including the above, bring the power of life to film. And now as the festival is winding down and most of the business types have left the area, we can turn to the final days of film watching and friendships.