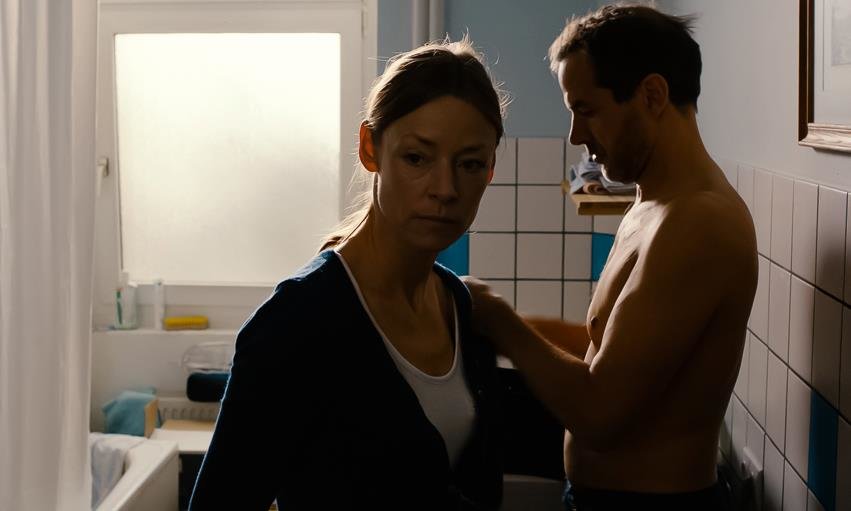 Among other things, TIFF is a place for getting rid of aesthetic prejudices. I often drag my feet going to experimental projects—you know, from our conversations, that I’m far more of a narrative guy—and yet I always marvel at the beauties I find in them. Imagery and rhythm are self-sufficient pleasures, and the three-part Wavelengths program we saw showcased plenty of these elements. Following Un conte de Michel de Montaigne, João Pedro Rodrigues’ The King’s Body also uses a statue as a recurring image—not the smilingly contemplative Montaigne of Jean-Marie Straub’s splendid recitation, but the armored-for-battle Afonso Henriques, Portugal’s first conquering monarch. There their similarities end, however: whereas Straub gets his mysterious effects from sun-dappled tableaux punctured by darkness, the rustling of leaves and Barbara Ulrich’s reading of the text, Rodrigues envisions a different form of performance through a parade of sinewy beefcake. As the green-screen background parachutes them into a variety of historical spots, some twenty men strip for the camera, wield medieval blades, and awkwardly read historical letters. There’s an affectingly Warholian tinge to these micro-portraits of exotic dancers, bodybuilders, carpenters and teachers modeling with earnest cluelessness for Rodrigues, and, at just over 30 minutes, the filmmaker’s queering joke on Portugal’s mythical body politic doesn’t wear out its welcome.

For me, the program’s revelation was Redemption, 26 tremendously dense minutes which should cement Miguel Gomes’ position as a modern master of melodic cine-fusions. A found-footage poem in four stanzas, it begins along the lines of Gomes’ great Tabu, with tribal drums and colonial wanderers. It’s 1975, and a child’s voice narrates a letter to the parents who stayed in Africa, expressing the longing for a fantasy land that could hardly be more different from the Portuguese countryside captured in faded home movies. The voice rushing us along becomes elderly for the following segment, as an aged Milanese man ponders post-war Italy and his own lost love via a kaleidoscope of newsreels and film clips. Next, the narration is passed on to a French politician in 2012, letting his daughter know that he won’t be holding an important position and, worse, he won’t be able to come to her birthday parties any time soon. Finally, a young German bride in 1977 recounts her wedding-day sorrow, a sadness exacerbated by her inescapable love for the music of “that fascist” Wagner. Four different, unseen characters pouring their memories onto the screen, or the same incantatory spirit moving between nations and years as part of the same yearning conscious? Gomes’ braiding of textures both scratchy and lush is lyrical, mischievous, and profoundly emotional.

Back to features. Ramon Zürcher’s The Strange Little Cat is another small miracle, a compressed, oblique, peculiarly funny and beguiling exploration of shared spaces. The stage, so to speak, is a teeming Berlin apartment where three familial generations—from the grandmother dozing in the bedroom to the little daughter merrily shrieking by the kitchen table—participate in little choreographies of domestic bustle. A teenage girl tells of a dream about orange peels, a boy outside plays hacky sack, a corked bottle suddenly pops and smashes a light bulb. Through it all wanders the eponymous orange feline, a silent witness except for a purr that can hypnotize even the household’s pooch. In his feature debut, Zürcher displays a limpid sensory approach (the rattle of appliances is as much a compositional element as the sun emanating from a window) that’s been justly compared to Jacques Tati’s, though the tight planar arrangements often seem closer to mid-1970s Chantal Akerman. People come and go within these fixed, slightly off-center frames, bits of eccentricity become running gags, and every cut is a droll new visual opening. The Strange Little Cat can feel like a whirring toy, a screen brimming with pointillist delights, and then one look at the subtle yet lingering grief on the mother’s drawn face and the playful surfaces suddenly pulse with melancholy, even ominous undercurrents. It’s a miniature that grows larger and more secretive, tenser and more flowing the more you gaze into it.

One final discovery: David Mackenzie’s excellent Starred Up. The opening image of a youngster in a boxed-in composition, head down in a prison van, is out of Alan Clarke’s Scum; the circles of alienation and power behind bars, the way heads butting against walls blend the metaphorical with the visceral, are very reminiscent of Joseph Losey’s The Criminal. But where in these British forerunners would you find a shot like the one where a high window suffuses the inside of a cell with harsh yellow light, while the head of the teenaged prisoner (Jack O’Connell) pokes in and out of the bottom of the frame as he exercises? Every interaction is volatile: one dumb, abrupt gesture is enough to get the protagonist surrounded by charging guards, so he simply smashes a table and brandishes the splintery pieces, ready for battle. Trapped by grids within grids, O’Connell and his prison-kingpin father (Ben Mendelsohn) are forced to face their jagged bonds. All of Mackenzie’s characters in Young Adam and Asylum and Mister Foe are prisoners in one way or another, and his latest is a family drama and a love story dressed in penitentiary grays, a tale about people slamming into each other and into their own limitations, a chain of alliances brutally damaged and tentatively mended. Each punch is felt deeply.

And, with that, I’m off. It was a treat to navigate TIFF with you, my friend, and I look forward to your closing words.

See you next time,