In contemporary cinema many camera pans look like postcards, but ones without the simplicity or light-hearted use of clichés of the past. (No European ever hated an American film for those old expository shots of their cities.) Those opening postcards once led us to, say, Gary Cooper. And therefore we knew it was cinema. Today, the postcard pan tries to lead us to the illusion that we actually are somewhere, and not in a film. But a panning shot by itself is not a pretense, it is just what it is: a look over rooftops, at streets seen from above, hills and roads, all passing by—a Google view of the world. The pan is no longer the amazed discovery of what cinema could embrace (the 1900s) nor the deep breath of the Straubian traveller. It is now an illusion of legibility or a misplaced conception of opacity, a shot trying to convey a documentary reality, to prove to the viewer that he or she is "there."  The light-hearted "postcards" of the past were a device too, but with a different relationship to the audience: that of complicity, sharing the same images without proving anything, simply taking the viewer by the hand to enter fantasy.

Let me slightly contradict myself: I also remembered the opening of Mamoulian's Love Me Tonight. Monuments in Paris, yes, but half-seen at dawn. You might say that the 3rd shot—where a cyclist irrupts into the frame (left to right)—is the beginning of a French film: perhaps Carné, Grémillon or Rohmer? Documentary. Paris is this, even today. Then comes Hollywood, a set, and all is well. Still, no need to pan. 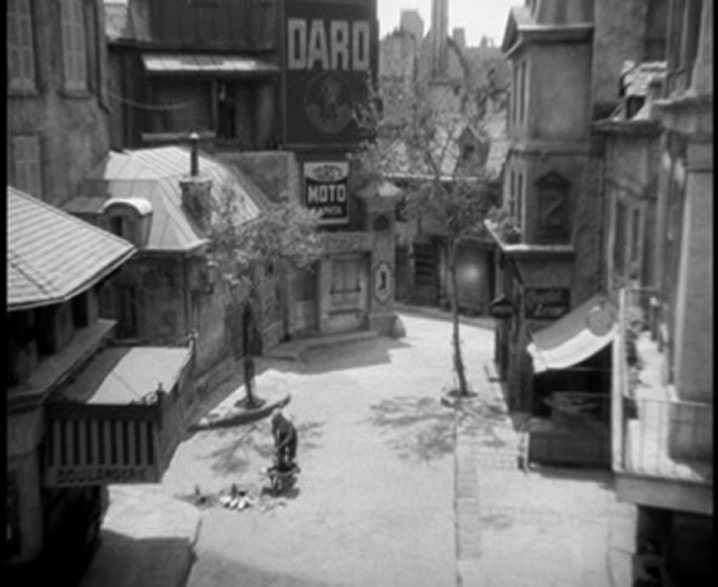 Top and above: Four times Paris and a set in Love Me Tonight.

Things That Came to My Mind While I Was Watching the FilmMamoulian
1
Please login to add a new comment.