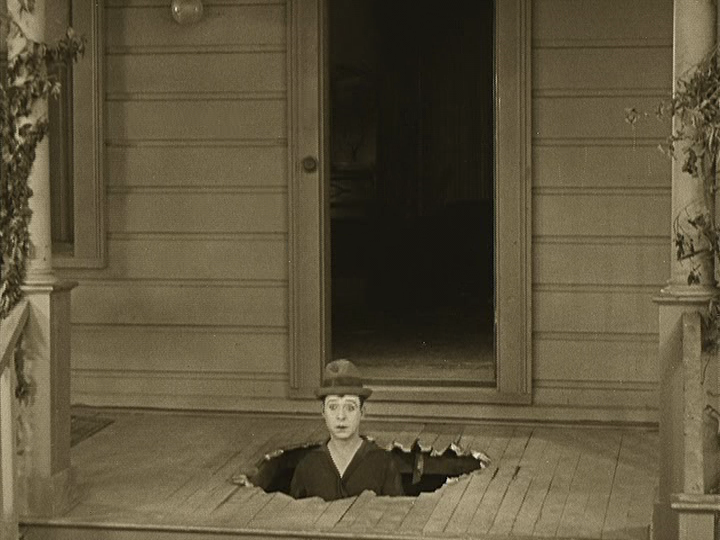 Harry Langdon, that pasty imp, enjoyed a brief renown in the heyday of silent comedy, assisted by his gagman-turned-director Frank Capra, then fired Capra and sank into a decades-long post-fame afterglow as a poverty row clown (briefly emerging to stand in for Laurel opposite Hardy in 1939's Zenobia). This portrait, painted by Capra, is somewhat true, but Capra embroidered it with his own self-aggrandizing version of events: Langdon didn't understand his own screen persona, which had been entirely created for him (mostly by Capra), and so without the guiding influence of greater talents, he sank inevitably into obscurity. Capra created a whole tragedy for his enemy, making Langdon sympathetic yet foolish, a man who achieved brief greatness thanks to the genius of others, but who lost out in the long result of time. Since none of Langdon's films were easily available for study when Capra was speaking, he got away with this...well, let's call it storytelling. And as character assassinations go, it at least uses pity rather than vitriol.

But hardly any of it is true. Three's a Crowd (1927), Langdon's attempt to compete with Chaplin in pathos, was misguided, but The Chaser, which Langdon directed solo in 1928, is an impressive comedy. The star, who, contra Capra, had a well-established vaudeville act and fully developed comic character, is as strange a presence as ever he was, a space alien deposited in a domestic sitcom. The plot may be what Buster Keaton would have called "an unbelievable farce," and the sexual politics are retrograde: Langdon's shrewish wife and mother-in-law drag him to the divorce court but the judge instead sentences Harry to six months as a housewife to teach him to appreciate his male responsibilities. Yet every frame with Langdon in it is a work of art. 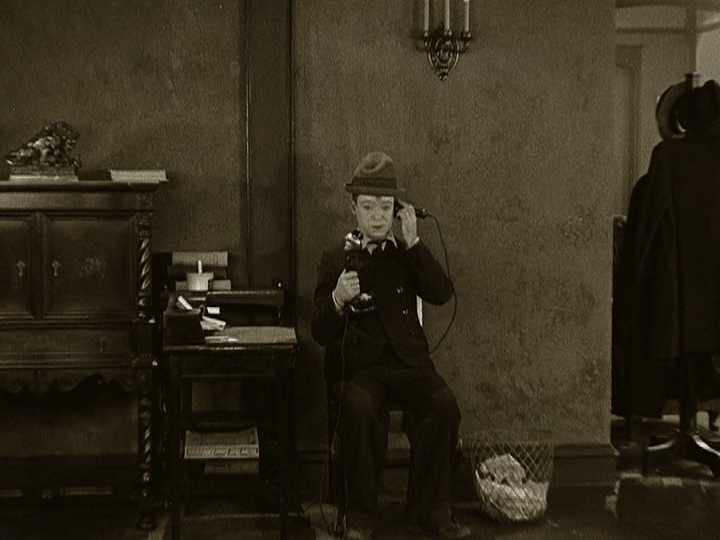 A frenetic montage shows wife and mother-in-law nagging down the phone: Langdon cuts fast and meaningless between the two jabbering women, making a kind of visual Stockhausen of redundantly repetitive, syncopated angles—then breaks the rhythm with a wide of Harry, sitting with receiver to ear, concussed by the verbal onslaught.

Later, the women pursue him through the house, and he tracks alongside the action, his camera passing through each wall like a ghost. One doesn't expect to see Langdon anticipating the Kubrick of The Killing and Lolita, much less Max Ophüls﻿, but there it is. I guess a more direct descendant would be the Jerry Lewis of The Ladies Man.

Try what you like, you can't find a shot of Langdon that isn't a masterpiece here. His peculiar, broken smile looks like his lips just snapped in the middle, while his limpid eyes just stare out of the frame, like soap bubbles awaiting their inevitable end. The pellucid white clown face is at once babylike and perversely sybaritic, and so flat, bloodless and blank that it somehow seems to be missing a few features: no, the nose is there; yes, he had eyes; and a mouth, of a sort—but something's not there that should be, damnit!

Nothing anybody says about Chaplin is ever true of all Chaplin's work, but one might argue that it didn't matter that he didn't frame beautifully since he controls the audience's eyes with his face and body, not with the camera. Keaton, of course, always creates the exact right rectangle in which to perform, and Langdon, it transpires, has some of this ability (but hats off to cameraman Elgin Lessley, who worked regularly for Langdon and also shot much of Keaton's best work).

It's true that casting himself as a married man is an odd thing for Langdon to do: he usually played a manchild so afraid of women that every love scene had a freaky tang of pedophilia to it (his pairing with Joan Crawford in Tramp, Tramp, Tramp is shuddersome). And emasculating him, to the point of forcing him to wear a dress (while Mrs. L dons a sharp suit), seems beside the point, there's so little of the thrusting jazz-age male about him. (Scientific research indicates that while adults can't tell a boy from a girl baby, other babies can, even if you swap the clothing around: something about the way they move. I wonder what they'd make of Harry.) 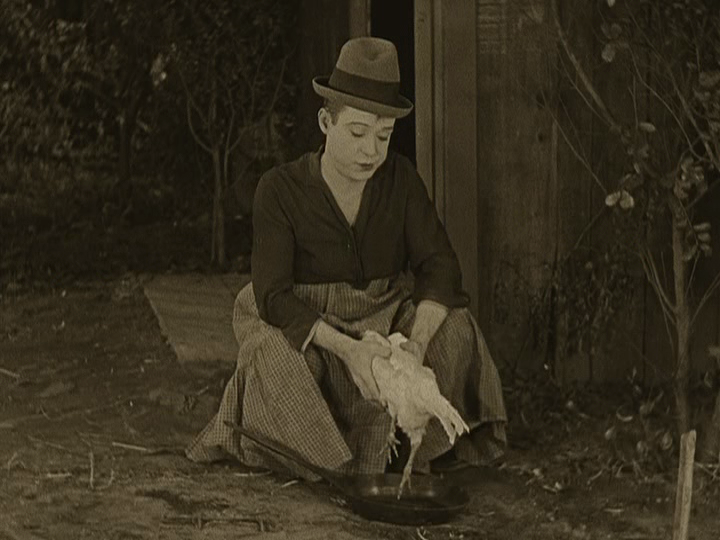 The comedian's command of the slowest slow-burn in comedy is still expert: one long scene has him simply waiting for a chicken to lay an egg. Giving up, he finds an egg laid under him, and thinks he did it himself. We're almost prepared to agree: Harry seems like the kind of man who might possess an oviduct, just in case, and he and the egg do show traces of a family resemblance. He nudges it away in superstitious horror: abomination!

Rather than the unmentionable depredations of Joan Crawford, here Langdon, in drag, must protect himself from lecherous men, which he does with those outbursts of savagery which are wont to erupt unexpectedly from behind his anemic facade. A kiss full on the lips from the iceman prompts him to yell "You sissy!" at his reflection, and contemplate suicide. A really beautiful gag: the big handgun he contemplates is too scary, so he selects a smaller one. 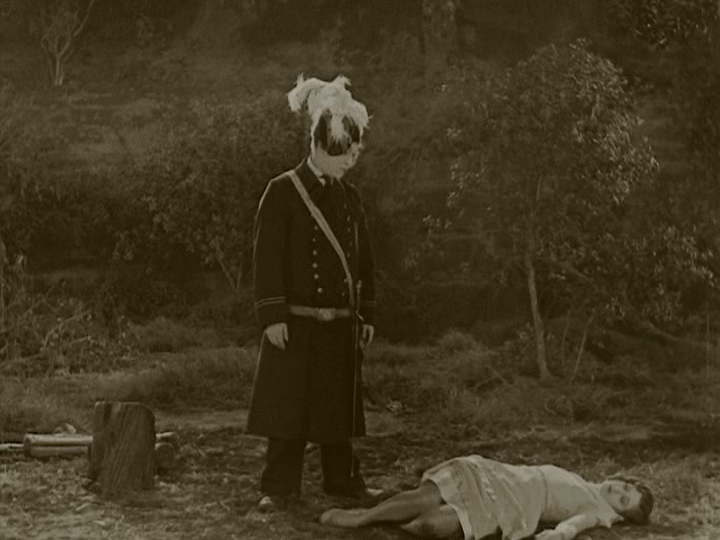 The film's sense of structure is slapdash at best: a golf sequence is there for no reason, really, and the discovery that Harry can render women unconscious with the power of his kiss is very much out of left field, delightful though it may be. There are unfunny bits alongside the funny ones, but the great stuff is genuinely great.

Perhaps Capra was right that Langdon didn't know his own character, but that's because he's a strange cypher, fuzzy around the edges, a mess of contradictions inside a white balloon with black dots for eyes. And who are we to judge?

The ForgottenHarry Langdon
2
Please login to add a new comment.