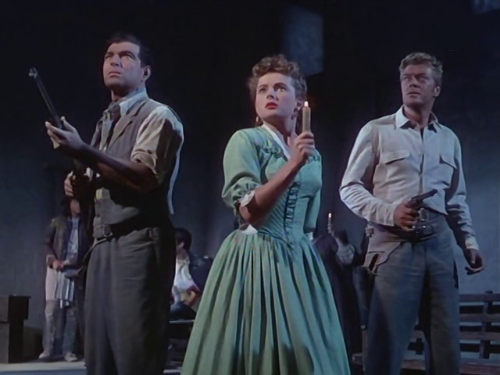 Acknowledging Apache Drums (1951) as the forgotten Val Lewton movie, we must also acknowledge that it's not quite as special as Cat People or Isle of the Dead or any of the others in the chiller cycle, but it does bear comparison with the lesser-known Mademoiselle Fifi and it certainly beats the pants off of Youth Runs Wild.

If the conservative nature of the western format reins in some of Lewton's more sophisticated tendencies, it also allows others to stand out in bold relief, and if director Hugo Fregonese is no Jacques Tourneur, nor even a Mark Robson, he's a perfectly amicable journeyman.

Admitting a certain B-movie banality, what's striking is how Lewton is able to continue his preoccupations into what might seem an alien genre, so that Apache Drums resembles, at numerous times, a supernatural/psychological horror movie, in which the horror is dually located in the American Indian "other," and in the fears and prejudices of the European American protagonists. 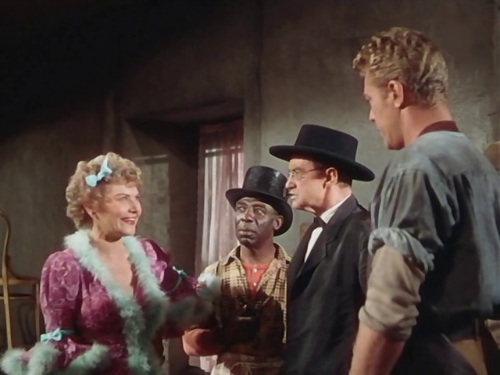 Attention to detail in writing and casting the smaller roles also adds to the sense of a believable  and engaging story world, the Texas town of Spanish Boot at the time of the Mescalero Apache uprising. In the role of small town madam Betty Careless, there's an all-too-brief but zestful appearance by Ruthelma Stevens, a '30s starlet of considerable fascination who never made it, despite a supporting part in The Scarlet Empress.

Lewton gave pretty decent roles to black actors throughout his RKO stint, and Apache Drums continues this by casting Clarence Muse, a fine performer who often seemed to seek out and seize upon non-stereotyped aspects of his roles (except in his Frank Capra films where I find him hard to watch, owing to the pervasiveness of the racism). As the story begins, a frontier town has just reached that level of "civilization" in which the mayor, Willard Parker, has decided to drive out the prostitutes and gamblers. Leaving town, the madam and her girls are massacred, and Muse, who has some unspecified menial job in the bordello (janitor? I'm uncertain of the terminology for those who work in bordello upkeep) is found dying. 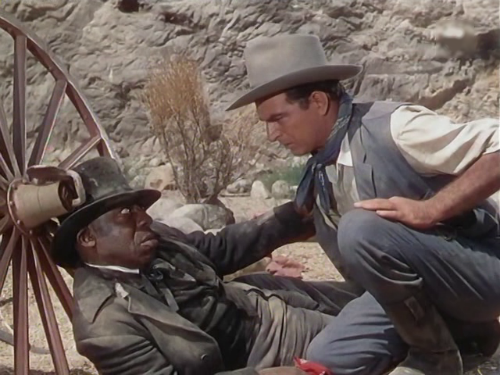 It's a grand speech, terrifically played, and when it's done, McNally has to pry the dead man's fingers from his collar. The scene establishes the film's supernatural flavor, further developed by subsequent scans across an empty landscape imbued with menace. That mood is alas slightly flattened by our first view of an Indian: Fregonese had presumably read the script, but somehow saw no reason to present this moment with any special atmosphere. We've all seen Indians before, in other films. Why should this one be different? And so a potentially gripping cinematic moment is squandered.

But the screenplay (credited to David Chandler, a TV and B-movie man, though Lewton can be presumed to have helped out) throws in plenty more elements of interest. The fact that the mayor (and blacksmith) of the little town of Spanish Boot, though played by the blond and square-jawed Parker, is an incompetent, a thug, and motivated mainly by a sexual jealousy he's too dumb to recognize, adds considerable intrigue. When McNally barges into church to warn the town of impending attack, the mayor remains doggedly engrossed in his reading material for some moments, uncannily recalling another Texas politician fifty years later. Yet even this lout will show heroism in the ensuing story, which is generous with the grace notes it hands out to all its characters. If the leading lady's role is underwritten, Coleen Grey enlivens it with a smoldering quality not indicated in the dialogue itself. 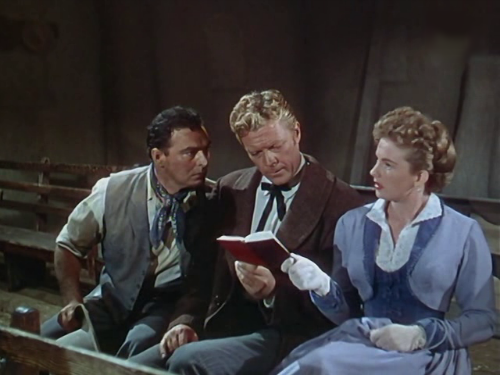 The Indians are simultaneously a force of otherworldly power, driven by mystic beliefs, and a real group of people with aims and grievances of their own. A friendly Indian character accompanies the heroes as they're besieged, and is victim of their prejudices. The local priest, Arthur Shields, is a tower of strength in crisis, but also a blind bigot. The gambler, Stephen McNally, due to be expelled as an undesirable, proves to be a hero. These are stock characters, but they all manage to transcend their genre limitations a few times. 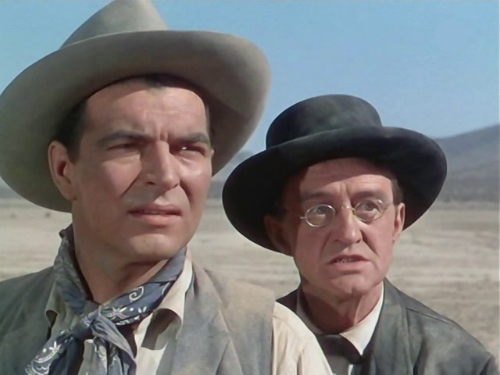 In regarding the native hordes as both awesomely fearsome, almost uncanny, and also as people, the film anticipates a later siege picture, Cy Endfield's Zulu (1964), which oddly uses the same Welsh fighting song, "Men of Harlech," to create a rousing build-up to the final conflict. And like the African-set colonial epic, there's a stimulating sense of strategy to the fighting, with the heroes pushed into an increasingly desperate situation where the only hope is to hold out long enough.

In the final stretch, Fregonese produces some real visual interest, and the film capitalizes on its color cinematography: as the room flickers with firelight, the Indians appear at the windows dipped in Technicolor body paint, each a different hue. It's a psychedelic, unsettling effect. 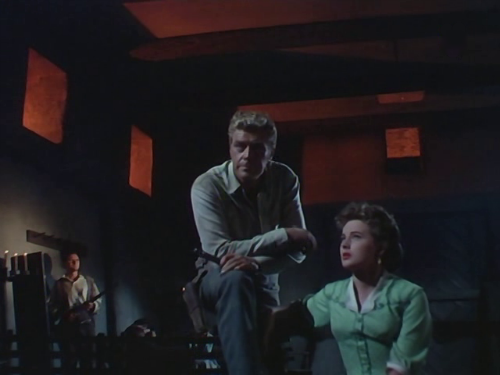 Lewton, after drifting for five years after the dissolution of his RKO unit, rather ruthlessly abandoned by Mark Robson and Robert Wise, was rallying. And then he died. What should have been the start of a new phase in his filmmaking became a neglected footnote. But all his admirers should see it.