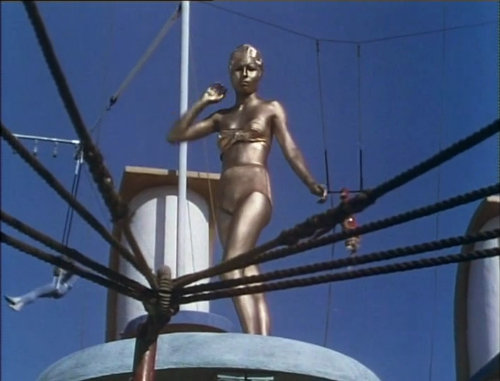 Cinema Circus is clearly a product of the great, yet under-reported MGM peyote-poisoning of 1937—how else to explain its baffling, surreal, Technicolor, grotesque yet undeniable existence? It is a chilling documentary record of some things that were performed in front of a camera, once upon a time.

A man in a gruesome Joe E. Brown mask is helped from his leering false-face, revealing another leering false face, that of Lee Tracy, who attempts to justify what we are about to see as the realisation of a long-cherished dream, although the exorcism of a recurring nightmare would be at least as plausible. 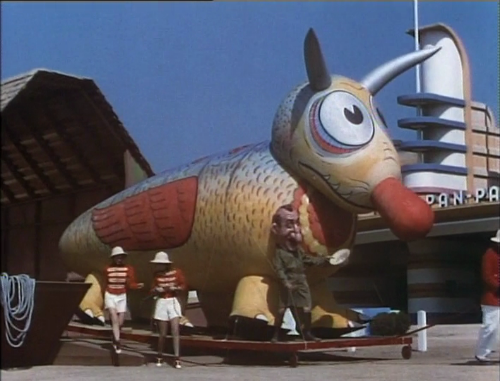 Meanwhile, more hideous outsized masks are sported, embodying movie stars too authentically famous to be roped into this sideshow: Clark Gable comes first, Technicolor transforming his latex features to the cyanate blue of the freshly asphyxiated. More death masks: Jimmy Durante with anteater/party whistle tongue flickering obscenely between rigid, lifeless lips; Wallace Beery, looking more like Clark Gable than we are accustomed to see him, the bulbous head wobbly atop an incomprehensibly slender man; Eddie Cantor (I think), eyes starting from their spheres in shocked reaction to some unseen cheese-wire garrote.

The script, a drunken miscellany churned out with obvious contempt for audience and performers alike, allows for only the most disappointing kind of entertainment. Lee Tracy actually gets laughs, but only when delivering straight lines: whenever forced to deliver some broken-backed pun, he must call on all his reserves of self-belief just to get through it without organ failure. Likewise, the set-up to a tired joke-shop prank involving Jack La Rue and his dates (but not involving the shy baby chimp in Alice Faye's arms: he's just there, for no reason) allows La Rue to display courtly boredom and incomprehension at the serried acrobats displaying overhead, a joy soon fractured by the conscious attempt at humor.

Cliff "Ukulele Ike" Edwards actually gets to do what he does best, watched over by Pert Kelton, inexplicably gone blonde to play an Indian. Meanwhile, some distinguished survivors of the Keystone Cops era (you know Chester Conklin, Ben Turpin; Hank Mann played the drunken, schizoid millionaire in City Lights) impersonate automata then join, tunelessly, in the chorus of a music hall song. MGM's idea of how to use silent comedians has not improved since they ruined Buster Keaton.

Watching it all is William S. Hart, calling upon whole new reserves of impassivity to get him through it. "This too, will end." 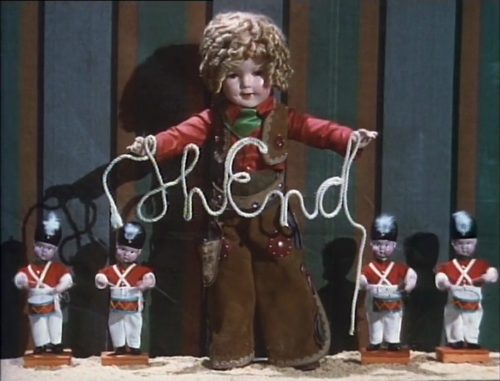 The ForgottenRoy Rowlandvideos
4
Please login to add a new comment.