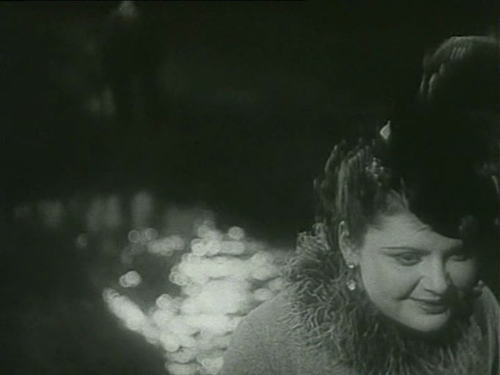 Pyshka, 1934, directed by Mikhail Romm. Romm was an intermittently successful Soviet filmmaker who toed the line, making two biopics of Lenin. The fact that Pyshka was sonorized in 1955, with a voice-over, score and sound effects added, suggests that he was still well-regarded then. Romm had a fantastic eye for composition, light, and character. I don't know too much or have too much to say about him, but I think these images speak for themselves, and it's probable that his own WWI experience informs the shots of dead soldiers that begin the story, by far the movie's most vivid sequence. 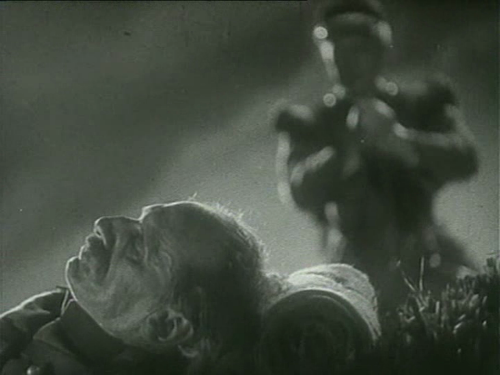 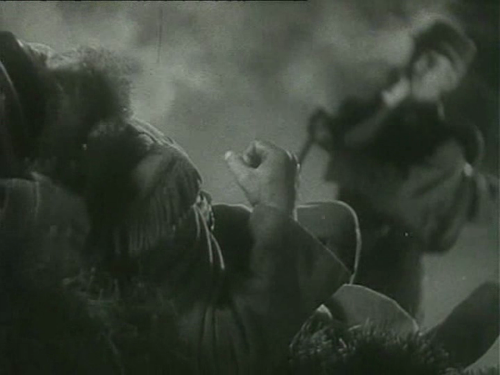 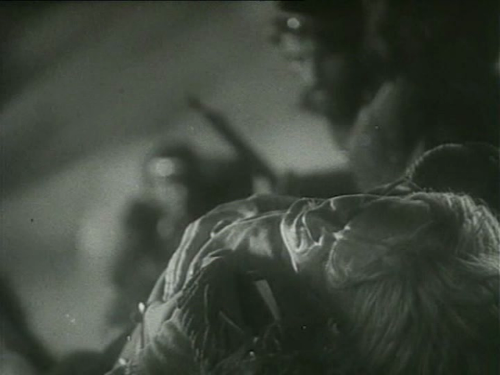 Pyshka is adapted from Guy de Maupassant's story Boule de Suif, which has an interesting cinematic history. One of Maupassant's semi-propagandist works dealing with the Franco-Prussian war, it's been bent to the purposes of a number of different filmmakers, nations, and era.

Basically, the story tells of a party of respectable citizens hastily leaving Rouen as the Prussians occupy the place. They haven't had time to eat, but when they pick up an additional passenger, "Boule de Suif," ("Ball of lard") a plump prostitute, they soon overcome their social and moral scruples and accept offerings from her well-packed hamper of food. 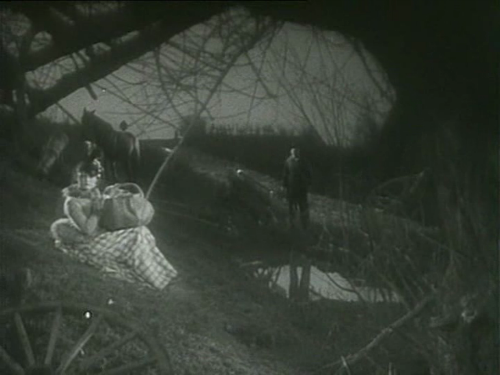 Stopped at an inn by Prussian guards, they find they can't continue unless the lady of pleasure sleeps with the commanding officer. Since they've all just been protesting their patriotism, she expects her traveling companions' support in refusing this demand. But bourgeoise business needs trump nationalism, and soon all are insisting that it's very selfish of her to withhold her professional services at this time. She reluctantly yields: and finds that she is now beyond the pale, branded a slut and a traitor by all.

It's a pretty dark story, in keeping with Maupassant's cynical, despairing sensibility, and well-served by Romm's casting and mise-en-scène﻿. Of course, even though it's a nineteenth-century period drama, it serves the purposes of the USSR by portraying capitalist Europeans in a very unsympathetic light. And indeed, acerbic as they are, the social observations are quite truthful. Too bad Maupassant never got a chance to write about the Soviet Union.

John Ford liked to claim that Boule de Suif was the ur-text behind Stagecoach (1939), though in fact Dudley Nichols's screenplay distorts the vague similarities between the Maupassant and Ernest Haycox's short story, the film's official source. In America, social divisions are seen as more permeable, and the fallen woman can be redeemed by the love of a good man who doesn't care what she's had to do, only who she is at heart. The other passengers mostly overcome their prejudices by the end of the story.

Five years later, Val Lewton fused two of Maupassant's war stories to make Mademoiselle Fifi, resulting in a somewhat disjointed structure but some striking sequences. Robert Wise directed within the typically restrictive RKO schedule and budget. Simone Simon was no more of a ball of fat than Claire Trevor had been in the Ford film, but here she's called upon to represent the true Spirit of France, and the addition of a second story allows her to transform from downtrodden victim to defiant martyr. Here, Maupassant's acidic view of his fellow countrymen serves as an implied criticism of France's submission before the Nazis, because this is a wartime propaganda film and no mistake. By admitting France's weakness, the film disarms any francophobia in its audience by seeming to agree, then showing Simon's heroism to change their minds. The sequence where she decisively knifes a German officer to death at the dinner table, with a palpable air of "so there!", is probably the most striking moment of violence in all Lewton's cinema. 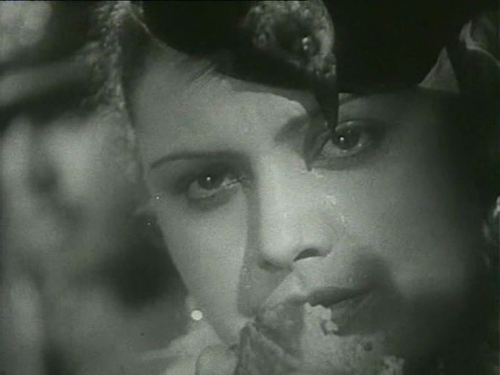 For the true, undistorted and jet-black vision of Maupassant, Romm is the man to look to. Avoid the sonorized version, with the sarcastic voice-over telling you what to think, and let Romm's slanted, diffuse, overcast images speak for themselves. The other versions are fascinating for their own merits and because they show just how far you can bend a story to mean something else. And now I'm very interested to see the only major French version of the story, directed by Christian-Jaque in 1945...