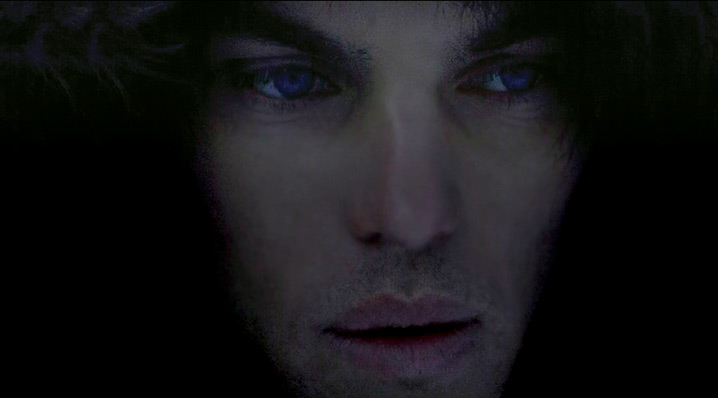 The sure-to-be controversial centerpiece of sorts of this year's Film Comment Selects screenings is a three-film retrospective comprising fiction features by French director Phillipe Grandrieux. So exacting and precise is Grandrieux with respect to the creation and projection of the cinematic image that he's been known to try to have the exit lights in theaters blacked out at screenings where he's in attendance. The immersion in total darkness is said to be particularly crucial to his latest picture, 2008's Un lac. The Grandrieux immersion occurs on Wednesday, February 24—a separate admission triple feature of sorts. It seems that each of the director's fiction films is less specific than the last in terms of time and place; Un lac is set in a forest in a territory somewhere in, we suppose, Europe...and features Russian actors speaking in heavily accented French. The film begins with its lead character, a young, rather pasty-faced young man, hacking away almost hysterically at something, with a tool of some sort. Given that Grandrieux's Sombre, the first of the troika screening at the Walter Reade, is an unusually harrowing picture about a serial killer, one cannot be blamed for being a little relieved that the object being hacked away at by the boy is a tree.

After the hacking, the boy falls into an epileptic seizure that proves, among other things, to be a not-particularly-efficient way of making a snow angel. Later, a handsome, non-epileptic fellow happens along and announce that he's here to "chop wood." He's also pretty attentive to the other young man's sister, for whom the epileptic boy seems to have something like an incestuous attraction.

Does this sound like a compendium of old-school art-cinema commonplaces, or, to use a less nice word, clichés to you? I'm not trying to create that impression, honest. And for all that Grandrieux is one of the most critically revered filmmakers working today. I'll tell you one thing: I can't hazard even trying to render a verdict here. (Aside from saying that Grandrieux is obviously a deliberately difficult, demanding auteur.) One could counter that the "story" isn't what Grandrieux is about; that with each successive film he has strove to make his imagery literally palpable, and that is finally what is important. But in order for the imagery to be palpable it has to be beautifully projected. (And another question: once the imagery is palpable, do the clichés of the "story" and "characters" become irrelevant? Or are they transcended?) What I've seen of Grandrieux's work I've seen under what I'd call less than optimum conditions, and what Grandrieux would likely call completely unacceptable conditions. Which is part of what makes the Film Comments Selects series so thoroughly invaluable: that it provides the opportunity to see genuinely provocative cinematic work, some of it at the cutting edge of both filmic and critical practice, under what are pretty close to, if not indisputably, optimal conditions. Another potential life-changer in the series is a restored version of Edward Yang's 1991 epic A Brighter Summer Day. Carl Foreman's 1962 The Victors is a more grandiose exploration of the conditions and mindset that produced Rossellini's immortal Paisan. Of course it's nowhere near as great as the latter film, and has a typically Foremanesque heavy-handedness. But it's still a convincingly bitter brew with an amazing cast that ranges from Eli Wallach to Elke Sommer to George Hamilton.

Of the other items on the docket, I can heartily recommend the revival of Rohmer's The Aviator's Wife. As far as the newer stuff is concerned, Hong Sang-soo's latest, Like You Know It All, is funnier in its first fifteen minutes than the entireties of Woody Allen's last three comedies have been. This is a great followup to the great Night and Day, by my sights. But the program as a whole is a goldmine for the curious cinephile, even in the selections that make one smote one's forehead. As in, "Really? An Larrieu brothers film? I'm still not over the trauma I experienced watching Peindre ou fait l'amour!" But then maybe I'll settle back down and say, "Well, maybe I ought to give those guys another chance." Well, if I do feel like giving them another chance, the Film Comments Selects screenings of Happy End on March 1 and 2 are likely the only shots in the United States I'll have at doing so.