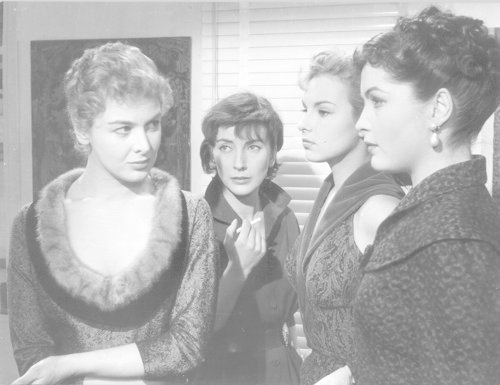 Cesare Pavese's 1949 short novel, Among Women Only, is a queasy first-person narrative about memory and loss and social hierarchies and futility. I call it queasy because its narrator, Clelia, a fashionista supervising the opening of a shop in her native Turin, where she's returning to from Rome after an absence of nearly twenty years, is a thoroughly unpleasant character, rather bad company; she's clearly torn between aspiring to be an arriviste and just letting loose with the most scornful and pointlessly pointed contempt for everyone around her. "I understand how people talk shop around their professions," she grouses early in the work. "but there's nobody like painters, all those people you hear arguing in the cheaper restaurants. I could understand if they talked about brushes, colors, turpentine—the things they use—but no, these people make it difficult on purpose, and sometimes no one knows what certain words mean, there's always somebody who suddenly starts arguing, says no, that it means this other thing, and everything's upside down." Clelia's a type: someone who's thoroughly irritating even when she's right.

To make Pavese's novel into the film Le amiche in 1955, director Michelangelo Antonioni and screenwriters Suso Cecchi d'Amico (whose credits show a nearly staggering versatility, ranging as they do from Big Deal on Madonna Street to The Leopard to Shoot Loud, Louder...I Don't Understand) and Alba De Cespedes, took the basic plot framework, which begins with an attempted suicide and ends with a successful suicide, and the five main female characters—Clelia, the troubled Rosetta, the materialistic Momina, the vamp Mariella, and the reserved artist Nene—...and shook everything up. Clelia (Eleonara Rossi Drago) is younger and softer and more naive and winning than her literary original. She remains pretty no-nonsense, as her attitude when she takes charge with the various layabout males who aren't working nearly hard enough to get the Turin dress shop ready for its imminent opening demonstrates. But where Pavese wants the reader to work in opposition to Clelia, Antonioni and his collaborators cast her as the audience's surrogate, shrewdly laying down a carpet that they'll pull out from under our feet as the film ends.

The desultory storyline of the novel is here replaced with a somewhat more soap-operaish web of romantic entanglements, or so it seems. This, too, will turn out to be something of a trick. Clelia begins to form an attachment to Carlo (Ettore Manni), the not-quite-working class adjunct to the shop's architect, Cesare (Franco Fabrizi). Cesare's got a little something going with Momina (Yvonne Furneaux), who's trying to negotiate a workable estrangement from her husband, e.g., one that will keep her in creature comforts. Flirty Mariella (Anna Maria Pancani) is not averse to trying to steal Cesare away from Momina for a little fun, while Rosetta (Madeleine Fischer), whose suicide attempt at the film's outset is the catalyst that brings Clelia into contact with this group, is hopelessly in love with Lorenzo (Gabriele Ferzetti), the artist who painted her portrait and who happens to be recently married to Nene (Valentina Cortese).

Career women and socialites on the make and on the go in a major metropolitan center; it does seem pretty familiar, doesn't it? While in Pavese's fiction the social aspirations tend to come off as abstractions, to a certain extent, Antonioni's architectural eye, always seeking unusual urban rhythms, yield a thorough and vivid picture of a Turin still bounding back from wartime; the city, its hotel lobbies, train stations, back alleys and old-style trattorias—these all constitute a discrete character in this narrative, which sees Antonioni exercising a cinematic style not merely mature but genuinely masterful. And yet it is somewhat dissimilar to the films that will follow it (his feature after this one is Il grido, The Cry, and next is L'avventura). The active sense of social observation is also present in the lively dialogue. At one point Clelia observes to her boss that in Rome, customers want to spend very little and look very lavish, while in Turin they want to spend a lot in order to look rather drab. Why would that be, asks the older woman. "Social diplomacy," Clelia notes. A fast learner, she. The specific attention that the filmmaker lavishes on certain specific elements gives Le amiche a particular kind of immediacy that still registers today. In a sense, it's the last Antonioni fiction feature for a while that doesn't deal in capital-letter themes. The filmmakers eventual return to this kind of modesty of scale, with Identification of a Woman in 1982, arguably had something to do with a diminution of artistic powers. But we should be careful to note that just because this picture has a more conventional genre setup and does not seem to be working towards a grand statement, that it doesn't have something to say. In fact the point it ends at is something quite devastating. The successful suicide that any other film would treat as a tragic climax is conveyed quite matter-of-factly, in a tossed-off fashion almost, and the audience is meant to understand that this action is not just a satisfaction of a genre convention but something even deeper, more primordial, relating to dramaturgy and catharsis and its ancient roots in ritual. That is to say, that this suicide is a blood sacrifice that, tragic as it is, provides the key to the other characters' happiness/fulfillment. Except...and this is really brilliant...it totally does no such thing, instead offering a series of images and actions that are the exact opposite of what you've expected and/or hoped for. As cinematic coup de theatres go, it's pretty remarkable.

Also remarkable is the restored print, created by the Cineteca di Bologna, that plays at New York City's Film Forum beginning this Friday, June 18. The very beautiful black-and-white textures of Gianni Di Venanzo's cinematography (he went on to work with Antonioni on Il grido, La notte, and the exceptionally striking L'eclisse; he also shot Fellini's 8 1/2) are returned to the silky sublimity that gives full definition to all the shades of gray that define these characters and their world.