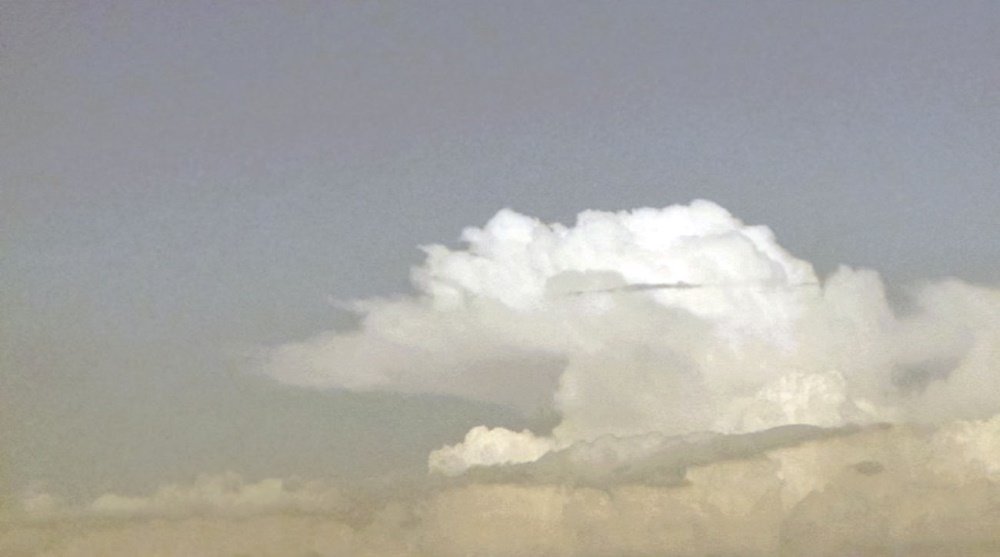 "Charlie Brackett summed it up beautifully, I think, when he said that in Europe you could open a picture with clouds, dissolve slowly to clouds, and dissolve again to more clouds. In America, though, he said, you open with clouds, you then dissolve to an airplane, and in the next shot the airplane's gotta explode." —John Sturges

“The black sky was underpinned with long silver streaks that looked like scaffolding and depth on depth behind it were thousands of stars that all seemed to be moving very slowly as if they were about some vast construction work that involved the whole universe and would take all time to complete. No one was paying attention to the sky.” —Flannery O'Connor, Wise Blood

Who'd be a haruspex? In ancient Rome, members of this holy profession pored over the entrails of freshly slaughtered animals, seeking portents among blood and guts. Divination as a basic concept was by this stage already well-established—the first civilisation to "identify" coded messages in natural phenomena being the Mesopotamians with their nephomancy, or the interpretation of clouds as media of prophecy.

Vast, shifting forms infinitely suggestive to the human eye and brain, triggering manifold subjective associations, clouds are supremely well-suited to such pursuits... "Sometimes we see a cloud that's dragonish / A vapour sometime like a bear or lion, / A tower'd citadel, a pendent rock, / A forked mountain, or blue promontory / With trees upon't, that nod unto the world / And mock our eyes with air." In FAROCKI, which premiered at the Viennale in Austria last month, James Benning stares fixedly at a single cloud-formation—mainly cumulus, with stratocumulus cameos—for just under 77 (soundless) minutes.

For the record, this viewer first spotted a horizontal representation of Japan's main island Honshu, which slowly became a submarine; he then discerned a gigantic fetus recalling 2001: A Space Odyssey; the face and hair of Milo O'Shea (or was it Radovan Karadžić?), the profile of British TV-magician Ali Bongo; the coast of Brittany; the island of Java (island-outlines are the most familiar irregular shapes), which then melted, aptly enough, into a map of Austria; the vast face of Myrna Loy in The Mask of Fu Manchu; the winged helmet from the logo of Gauloises cigarettes; a recumbent Sam Fuller (a la The End of Violence), and finally, before the clouds evaporate entirely into the cerulean blue, Mount Fuji. Cinema as Rorschach test: this list is a peek into the perceiver's conscious and subconscious associations, nothing more or less. The nature of human perception makes it near-impossible to avoid seeing faces and familiar shapes in what we rationally know to be simple gatherings of vapour, created and moulded by heat, wind and light.

That said, given Benning's well-known proclivity for tinkering with his digital images (at the Vienna screening he admitted engineering the climactic azure-fade), the possibility that he "placed" the fetus can't be entirely ruled out. Such a contribution would also be of a piece with the film's memento mori undertones, the title —Benning prefers the all-majuscule orthography FAROCKI —referring to its origins as a "gift" to the recently-deceased German master Harun Farocki (1944-2014), whom Benning regarded as a personal friend as well as creative fellow-traveller. The film is thus "77 minutes' silence for Harun," he mused when introducting the premiere. The all-capitals business is entirely in keeping with the late German's assertively bold approach to his film-making praxis—one of whose final flowerings, the installation Parallele I (2014), happens to include a juxtaposition of photographic and computer-generated cloud-images.

And it also serves to emphasise FAROCKI's status as unofficial companion-piece to Benning's TEN SKIES (2004)—the former being to the latter as BNSF (2014) is to RR (2007). In TEN SKIES, Benning trained his 16mm camera on the heavens above his California residence, editing the resulting footage into a decalogue of strikingly heterogenous ten-minute takes. The director, who has since his earliest shorts dealt with duration and its perceptions (his second film, from 1972, is entitled Time and a Half), thus unmasks the subjectivity and fluidity of our responses to time. We know, without recourse to a stopwatch, that each of the ten shots is exactly the same length, but while those with minimal "activity" may drag, those filled with aural and visual information can seem to fly by.

It's much trickier to code FAROCKI within Benning's hallmark structuralism. Unless there's some oblique reference to the 77th Psalm ("the clouds poured out water / the skies sent out a sound"), the number 77 doesn't have any special relevance either to clouds or the work of Harun Farocki—indeed, the chosen running-time here seems more arbitrary than in almost any previous Benning film.

In real life, of course, it's very unusual for anyone to gaze at a cloud formation for 77 minutes, as Benning's digital camera unblinkingly does here. But would the effect have been appreciably dissimilar if this scrutiny had taken up 62, 84 or 96 minutes? While there may not be anything mathematically or numerologically significant about the number 77, the duration seems to lie in a "sweet spot" in terms of its demands upon the cinema audience—though it should be remembered that the picture wasn't originally intended for theatrical exposure, rather as a private gift for its namesake.

77 minutes is long enough to demand significant investment in terms of time and concentration, to contemplate or even surrender to a Burkean 'Sublime'; short enough to avoid feeling like an imposition or an indulgent tiptoe into the realms of the Emperor's New Clothes. Benning's piece joins a cloud-art lineage of Friedrich, Turner, Constable (who painted nothing else between 1821-2), Magritte and also Ansel Adams, one of the few American photographers with whose work Benning has admitted significant familiarity.

Like the painters mentioned in the previous paragraph, Adams usually incorporated cloud-formations to provide counterpoint to more solid details of the terrestrial landscape. FAROCKI, however, offers no such scale-referent. Indeed, its impact recalls Kleist's famous contemporary reaction to the peerless Friedrich masterpiece Monk by the Sea (1810): "since in its monotony and boundlessness it has no foreground except the frame, when viewing it, it is as if one's eyelids had been cut away."

Reproductions of Monk by the Sea invariably fail to capture the full picture—inspection of the original in Berlin reveals that the eponymous brother is by no means the solitary figure he initially appears. The canvas actually teems with life, with more than a dozen creatures visible either on land or in the air. FAROCKI likewise can be taken on one level as a deeply unorthodox wildlife documentary: the vaporous "protagonists" share the frame with perhaps half a dozen swooping eagles and even a couple of flies which buzz peskily close to the lens, so close that they blur into abstraction. Several man-made craft flit across the image, their arrow-straight lines—leaving no contrails in their wake—unbendingly rigorous and artificial in contrast to to the eagles' gracefully current-borne meanderings; their hurtling speed seemingly exaggerated by the clouds' near-imperceptible development. Evolving with minute-hand deliberateness, these clouds have the lineaments of some vast, self-contained, indifferent alien species, one whose concepts of time are utterly removed from our own.

Benning is on record as saying that the footage which makes up FAROCKI was recorded on a chance impulse: "at the end of July I had been driving from the mountains where I live to the house that's near where I teach at CalArts and I saw a cloud in the sky, and I thought 'oh, maybe I'll film that cloud'... I watched the cloud as I drove back from the mountains and it seemed to follow me all the way home and I got my equipment and I set up my camera and then I filmed it for 77 minutes and then I packed my stuff up."

His choice of the cloud in question attests partly to his good judgement as a veteran scrutinizer of earth and the sky, partly to his good fortune in finding such a "lively" 77 minutes of cloud, bird and plane activity. And mentioning fortune isn’t in any way to belittle the scale of achievement. Yes, anyone could have gotten out their camera and recorded the movements of a cloud; Benning actually did so, as the logical extension (and culmination?) of his landscape and skyscape investigations from the four previous decades.

Matisse created The Snail at 83 from bits of coloured paper while confined to his bed; Benning, more than a decade younger, remains in sprightly, outdoorsy health. But while FAROCKI may never join the likes of The Snail (let alone Monk by the Sea) in artistic pantheon, there's a similar sense of a quietly grand achievement tossed off with genuinely casual aplomb—thus vindicating the dictum of Benning's hero Robert Smithson that "a great artist can make art simply by casting a glance." The sweating haruspex's hands may have swum in intestinal gore, but that didn't make his predictions a whit more valid than the musings of the serene, windblown, sun-kissed nephomant.