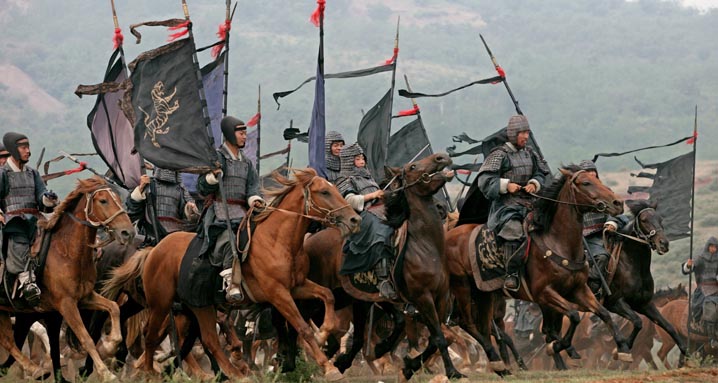 Like Aleksandr Sokurov's The Sun (see yesterday's entry), John Woo's Red Cliff opens in New York today before traveling on to other US cities. "This $80 million epic - which is being touted as the most expensive Chinese-funded production to date, despite drawing investors from all across Asia - streamlines the classic 14th century novel Romance of the Three Kingdoms, a text of imposing narrative complexity that has nevertheless maintained its central place in national mythology and pop culture," writes Andrew Chan in the L Magazine.

The investment's paid off. In China, Red Cliff has surpassed Titanic's earnings to become the highest-grosser on record. Andrew Chan: "As the only mainland-born director to experience success in Hollywood, Woo has chosen to embrace his birthplace at a time when its commercial cinema is swallowing up the Hong Kong industry in which he built his reputation, and also attempting to reinvent itself as the equal to American gigantism."

The version screening in the US, however, is a little less gigantic. It runs about 150 minutes, whereas the original cut, usually screened in two parts, is nearly twice as long. Yesterday, Glenn Kenny wrote here about that version, widely available on Blu-ray and DVD, pointing out what's been cut and to what degree a viewer might feel the loss. For Scott Foundas, writing in the Voice, this "may not be a murdered masterpiece on the order of Heaven's Gate and Once Upon a Time in America, but it's unquestionably a lesser thing: saddled with an introductory voiceover; plastered with supertitles identifying individual characters (which actually have the effect of making the name game more confusing); and, most egregiously, stripped of most of the quieter, character-building scenes that are precisely what are needed to give non-Asian audiences a sense of why these events and their participants have loomed so long and so large in the collective Chinese consciousness."

"Now Woo seems to find himself in the midst of a career-arc curiously similar to that of Zhang Yimou, who only a few years ago traded in his penchant for soft, interchangeable art-house pieces for hardcore fantasy-fu, ripe with the kind of eye-popping historical revisionism," writes Leo Goldsmith in Reverse Shot. "Of course, in Woo's case, the change in style is not so different than the change in country, and so the first thing that strikes the viewer of Red Cliff is how much more down to earth it is than Zhang's multicolored flights of fancy."

Writing in Slant, Nick Schager finds that even "if the director's recurring motifs remain pale shadows of their former selves, his choreography of large-scale skirmishes proves impressive, boasting a physical scale and tense pacing that helps overshadow a lack of spatial lucidity and some out-of-place superhuman exploits."

Also opening in New York today: "A shocking chronicle of institutional dysfunction, The War on Kids likens our public school system to prison and its disciplinary methods to fascism," begins Jeannette Catsoulis in the NYT. The film "questions what kind of citizens we are producing. Parent or child-free, we all have a dog in that particular fight." More from Ronnie Scheib (Variety) and Ella Taylor (Voice).

A newly restored print of Jacques Tati's M. Hulot's Holiday begins a two-week run at Film Forum on Friday. "Pitched somewhere on the comic-iconic scale between Chaplin's Little Tramp and Jerry Lewis's manic manchild, Jacques Tati's bumbling stick-bug of an alter ego is considered by many to be the funniest creation to come out of Gallic cinema," writes David Fear in Time Out New York. For Cullen Gallagher (L), Holiday "is one of the most delightful cinematic experiences I have ever encountered." 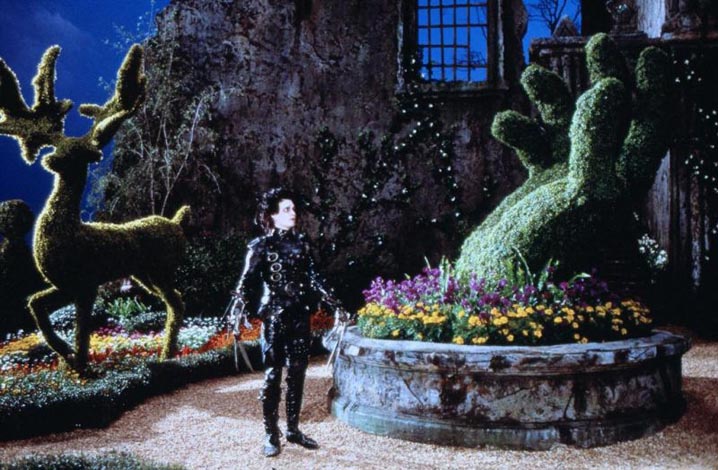 "What will five months of feting by MoMA do to Tim Burton's perversely blockbusting outsider art?" asks Rob Nelson in the Voice. "Probably nothing. Intensely devoted to a scissorhandful of pop-surrealist obsessions, Burton has, with few exceptions, been making the same semi-autobiographical film for almost 30 years: Misunderstood loner waves his freak flag in wonderland. And so it should remain after the museum finishes exhibiting 17 of his features and shorts (through the end of the year), along with hundreds of little-seen artworks (through April 26) that - dating from his 60s and 70s childhood to the present - reveal admirably little in the way of range."

MoMA invited the press for a preview yesterday. Brian Brooks has a full report for indieWIRE; Jill Krementz snapped a lot of photos and the Guardian's got video. ArtBabble's hosting a video interview with Burton and Jenni Miller talks with him for Cinematical. Online browsing tip. Wired's got a generous sampling from the forthcoming book, The Art of Tim Burton.

The Gotham Independent Film Awards will be presented on November 30, but first, they'll be "preceded by a screening series devoted to their Best Film Not Playing at a Theater Near You category, intended to expose true indies to a wider local audience," writes Karina Longworth in Time Out New York. "Each film currently remains without distribution in the US and will be screened at the Museum of Modern Art starting Thursday 19; the picks range from October Country, a lyrical documentary portrait of an upstate New York family, to Guy and Madeline on a Park Bench, a lo-fi musical that was a standout at this year's Tribeca Film Festival."

Updates, 11/19: "Despite the occasional clunkiness of the foreshortened Red Cliff and its ancient-world setting, it's unmistakably a John Woo movie," writes Andrew O'Hehir in Salon. "It's built around patterns of male friendship and enmity, a deadly feud over a beautiful woman who represents the domestic bliss Woo's violent heroes always yearn for, and three or four of the most elaborate action sequences ever filmed."

Tim Burton's on the cover of the New York Press and, in her story, Jocelyn Miller also highlights the work of four more artists who "all obsessively confront and manipulate socially unsanctioned imagery to delve into their own intensely personal, idiosyncratic worlds. Critics be damned."

Brandon Harris and Michael Tully (Hammer to Nail) have more on the Not Playing at a Theater Near You series.

Updates, 11/20: A B- from the AV Club's Scott Tobias for Red Cliff: "The film is both traditional and modern: austere in its engagement with history, and insistent in its showy action beats."

"Given the tremendous visual appeal of Mr Burton's movies, you would hope that Tim Burton, the Museum of Modern Art's expansive retrospective of his noncinematic art, would be equally exciting," writes Ken Johnson in the New York Times. "Alas, it is a letdown. Focused mainly on hundreds of drawings dating from his teenage years to the present and including paintings, sculptures, photographs and a smattering of short films on flat screens, it is an entertaining show and a must for film buffs and Burton fans. To see the raw material from which the movies evolved is certainly illuminating. But there is a sameness to all Mr Burton's two- and three-dimensional output that makes for a monotonous viewing experience."

Updates, 11/22: Dennis Lim in the Los Angeles Times: "Woo hasn't abandoned Hollywood - he lives in Los Angeles and still has studio projects in development, including a film about Marco Polo and a remake of Melville's Le Samourai (which he paid tribute to in The Killer). But his next movie, Flying Tigers, about volunteer American pilots who fought with the Chinese during World War II, will be filmed and likely financed in China."

"Magnet's move to distribute the mangled 'international cut' is particularly disheartening considering that they're preventing their audience from getting swept up in the film's countless asides, all of which tie into the film's main theme of fraternal unity, but in their own sweet time," argues Simon Abrams at the House Next Door.

Filmmaker's Scott Macaulay has more on the Not Playing series.

Updates, 11/23: "John Woo's new film, Red Cliff, marks a shift in the director's choreography of bodies," writes R Emmet Sweeney at Moving Image Source. "It is a move toward intimate epics, a telescoping style where individual gestures spur intricate army formations and where every flanking maneuver or tea break has world-historical consequences."

Capone talks with Woo for AICN.

For news and tips throughout the day every day, follow @theauteursdaily (RSS).