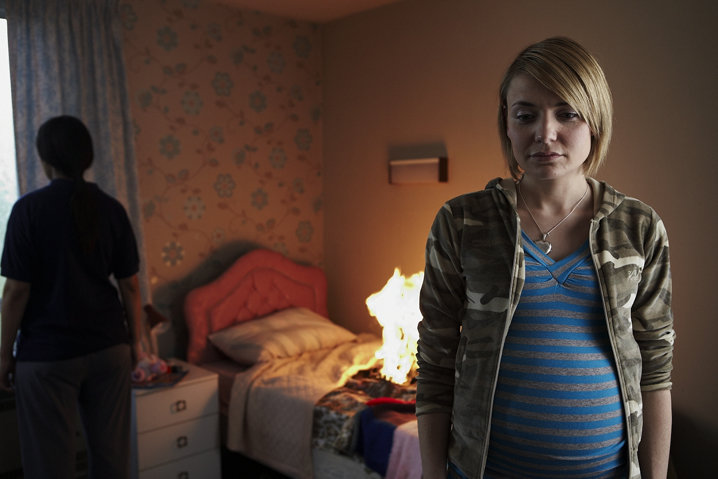 Above: Clio Bernard's The Arbor.

An entirely subjective rundown of the 20+ most-anticipated British films scheduled to have their first public screenings between April 20th and December 31st 2010.

1. Robinson In Ruins (dir. Patrick Keiller)
To call Robinson In Ruins “long awaited” doesn’t quite cover it, given that 13 years have now elapsed since Patrick Keiller’s last release, Robinson In Space (1997). The latter, a quizzically unclassifiable hybrid of political-sociological essay-film and landscape documentary with fictional elements, was perhaps the finest British film of the 1990s.

Like its predecessor London (1994)—also a masterpiece—it featured narration by Paul Scofield. With Scofield now sadly gone to a “better place,” Keiller (who in the interim has been busy with a stack of non-film projects) has turned to Vanessa Redgrave to provide the voiceover for what is apparently a “record of a journey made around southern England in 2008.”

Among his key inspirations, the following quote from Fredric Jameson: “It seems to be easier for us today to imagine the thoroughgoing deterioration of the earth and of nature than the breakdown of late capitalism; perhaps that is due to some weakness in our imaginations.” Precise details are predictably sketchy at this stage, but it seems likely that Robinson In Ruins will premiere at the Venice Film Festival in September. Hopes are, shall we say, somewhat high…

2. untitled (Joanna Hogg)
I have tried to avoid including untitled projects in this list, as if a film doesn’t have a name by late April that suggests it won’t be ready before the end of the year. However I have made an exception for writer-director Joanna Hogg, as the picture is now in post-production and will presumably debut at London Film Festival in November.

Her belated, brilliant debut Unrelated (2007)—a meticulous examination of dysfunctional interpersonal relationships within the structures and strictures of class systems—won the Fipresci prize there, and this new project sees her reuniting with her leading man Tom Hiddleston (recently cast as Loki in Kenneth Branagh’s big-budget superhero epic Thor) and her editor Helle le Fevre. The new film is set in Cornwall, and may or may not be the same project which she was reportedly shooting in 2008 under the title The Eternal Daughter.

3. Brighton Rock (Rowan Joffe)
It’s perhaps a little surprising that Graham Greene’s cracking thriller has only been filmed once before—by John Boulting in 1947, with Richard Attenborough enjoying arguably his finest hour as psychopathic teen gang-leader Pinkie. More than sixty years later, Sam Riley (so very wonderful as Ian Curtis in Control) takes over the role under the direction of Joffe—his first big-screen feature after writing Last Resort and 28 Weeks Later. Helen Mirren has the juicy role of nosey, brassy barmaid Ida, while rising star Andrea Riseborough (also to be seen in Never Let Me Go, #18 on our list) is the female lead as the mousy waitress who becomes involved in Pinkie’s seedy Brighton underworld.

Edited by Joe Walker (Hunger) and shot by Ridley Scott’s DP of choice John Mathieson, Brighton Rock—which will presumably linger on the tale’s razor-slashing violence rather more explicitly than the 1947 version—looks to be Britain’s big prestige offering for 2010, with BAFTA nominations a matter of “how many” rather than “if.” One caveat: Riley is now 30. Wouldn't Thomas Turgoose (18 this year) or Jack O'Connell (now 20) have been closer to Greene's description?

4. Blitz (Elliott Lester)
Ken Bruen, Galway’s very own James Ellroy, looks set for a banner year with two high-profile adaptations of his well-regarded crime novels: London Boulevard (see #11 below) and Blitz, in which a serial-killer targets London cops. Shot by Rob Hardy (whose big-city cinematography was one of the few saving graces of Dogging – A Love Story) and edited by veteran John Gilbert (Fellowship of the Ring), it features an irresistible cast that includes Britain’s two finest actors of their generation, Paddy Considine and David Morrissey, supporting a top-billed Jason Statham in a role which may yet see the much-derided action star display a new side to his thespian skills (not that there was much wrong with last year’s Crank 2 – High Voltage). Director Lester’s sole previous outing was 2006’s little-seen American indie Love is the Drug, but Blitz has the potential to a rare critical and audience success (famous last words…).

5. Neds (Peter Mullan)
Many esteemed British actors are stepping behind the camera at the moment—including Samantha Morton (The Unloved, currently doing the festival rounds) and Paddy Considine (Tyrannosaur has just started filming and looks set for an early-2011 debut). But so far the most successful example of a Brit combining both careers is Peter Mullan, whose 2002 sophomore effort The Magdalene Sisters won the Golden Lion at Venice (to add to his Cannes Best Actor gong for My Name is Joe).

Since then his acting has taken precedence (including getting smashed over the head with a concrete block in Children of Men), and plans to write (and maybe direct) the big-screen adaptation of The Time Traveler’s Wife ultimately proved abortive. But now he’s back with Neds—a 1970s-set tale of young Scots tearaways (“neds” being roughly the Scots equivalent of what in England are known in certain quarters as “chavs”) partly drawn from his own experiences. It was at one point tipped to premiere in competition at Cannes, but the Lido now looks a more likely harbour.

6. Chatroom (Hideo Nakata)
Hunklet-du-jour Aaron Johnson (Kick-Ass, Nowhere Boy) and the rather lovely Imogen Poots (28 Weeks Later) stars in this decidedly commercial-looking, London-set, British-produced chiller from the prolific Japanese director best known for Ring, and which is premiering in Cannes’ Un Certain Regard. Edited by Masahiro Hirakubo (Trainspotting, etc.), shot by Benoit Delhomme (What Time is It There?, etc.), scored by Kenji Kawai (Avalon, etc.), written and based on the play by Enda Walsh (Hunger).

7. Burke and Hare (John Landis)
As with #6, another British “horror” from a non-British director—Landis (last UK-shot effort: An American Werewolf In London) being perhaps overdue a late-career revival—though one suspects that the tone will be rather jauntier here than in the Nakata picture. Simon Pegg and Andy Serkis are the eponymous 19th century graverobbers, supported by the high-calibre likes of Jenny Agutter, Tom Wilkinson and Tim Curry.

8. The Wicker Tree (Robin Hardy)
Yet more horror, this time a long-gestating “re-imagining” of Hardy’s 1973 pagan classic The Wicker Man—based on his own novel Cowboys for Christ, and marking his return to directing following the 24-year hiatus since The Fantasist. Christopher Lee heads the cast as Lord Summerisle.

9. Wake Wood (David Keating)
Speaking of Christopher Lee…he isn’t in this Irish chiller, but it’s the first project to be made by his former long-term employers Hammer Studios since their revival as a feature-film entity a couple of years back—they are also responsible for US-set Let Me In (remaking of Swedish vampire smash Let the Right One In) and Hilary Swank vehicle The Resident. Promising cast for this supernatural tale, including Timothy Spall, Aidan Gillen and Eva Birthistle.

10. The Arbor (Clio Bernard)
Reportedly an audacious combination of documentary and film techniques, this Tribeca-premiering debut from writer-director Bernard explores the life and work of late playwright Andrea Dunbar. Eyecatching name in the crew is that of cinematographer Ole Bratt Birkeland, whose contributions to Helen (2008) suggest he’s a major European DP in the making.
[stop press: first Tribeca reaction]

12. Cherry Tree Lane (Paul Andrew Williams)
After a slight mis-step with larkish, uneven The Cottage, fingers crossed that writer-director Williams can justify the promise of his genre-blending 2006 debut London To Brighton. Urban horror is promised.

13. Paul (Greg Mottola)
Directed by an American (Mottola of Superbad fame) and set-shot in the States, but this is a French-British co-production starring and written by the eminently English duo of Simon Pegg and Nick Frost. Culty-sounding sci-fi about a pair of vacationing Brits who encounter an alien (CGI, voiced by Seth Rogen) in Nevada’s Area 51. Also in the cast: Jason Bateman, Jane Lynch, John Carroll Lynch, Jeffrey Tambor, Blythe Danner. And Sigourney Weaver.

17. Route Irish (Ken Loach)
Yet another collaboration with uneven scriptwriter Paul Laverty, this Iraq-themed drama concerns a “private security contractor who rejects the official explanation of his friend’s death.” Was tipped for Cannes competition slot, but after lukewarm reception to Loach/Laverty’s Looking For Eric last year, perhaps an alternative festival launchpad may prove a blessing in disguise.

"pages from a cold island" is a monthly dispatch from the British film scene by Neil Young.