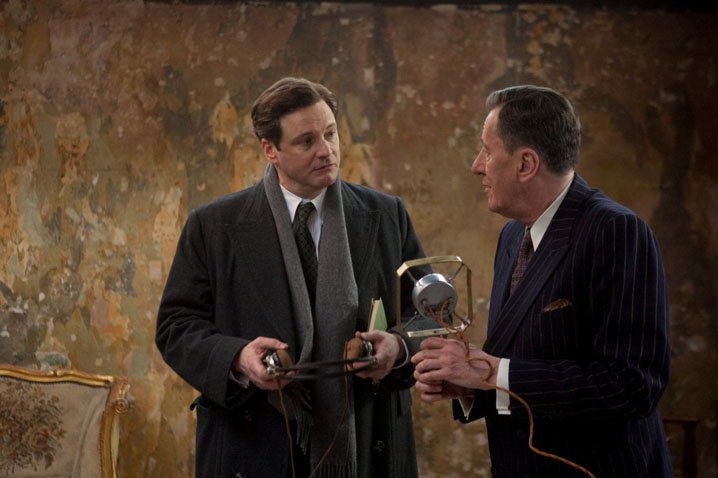 On the day the Oscar nominations were announced, I made some quick guesses and toyed with the possibility that True Grit might sneak in. I've changed my mind and now agree with the conventional wisdom that The King's Speech will be the year's best picture winner. Still, True Grit or The Social Network could pull off an upset. You might want to consider that when entering the $100,000 Outguess Ebert contest this year.

The contest is being co-sponsored by MUBI.com, an online art theater, with the Sun-Times, Ebert Presents at the Movies and RogerEbert.com. Everyone who outguesses me gets a three-month subscription to MUBI worth $45, and those who get all 24 categories correct will split the $100K. That's even if I get them all right, which is very unlikely.

If I were still doing "If We Picked the Winners" with Gene Siskel, my preference for best film would be The Social Network. It was not only the best film of 2010, but also one of those films that helps define a year. It became the presumed front-runner on the day it opened, but then it seemed to fade. Oscars often go to movies that open after Thanksgiving. It's called the Persistence of Memory Effect.

There's another factor. A lot of academy voters don't choose the best in some categories, but the most advantageous for the movie industry. Hollywood churns out violent crap every weekend and then puts on a nice face by supporting a respectable picture at Oscar time. I mean that not as a criticism of The King's Speech, which is a terrific film, but as an observation. A British historical drama about a brave man struggling to overcome a disability and then leading his people into World War II looks better to the Academy than a cutting-edge portrait of hyperactive nerds.

OK, I have 23 more categories to get through:

Actor in a leading role: Colin Firth for The King's Speech. Jeff Bridges is unlikely to win a second year in a row, and although James Franco did a heroic job under his (shall we say) constraints in 127 Hours, Hollywood loves British history and often gives extra points to UK nominees.

Actress in a leading role: In the way that such matters are decided by currents wafting in the air, Natalie Portman has emerged as the consensus choice. She is very good in Black Swan. That's beside the point. Everyone is good in this category. But she gets to act the most, which to the Academy, often means act out in emotional displays. She was required to do that by the logic of the role, which had Oscar written all over it.

Actor in a supporting role: Geoffrey Rush. Because it could be a King's Speech year. Christian Bale seems to have a good chance, but when a movie gets anointed, its aura shines on its other nominees, as if voters are thinking, "Well, if I voted for The King's Speech, doesn't that mean I keep voting for it?"

Actress in a supporting role: That tendency won't carry over to this category, however, because while Helena Bonham Carter as the king's wife was splendid, as she almost always is, the role wasn't showy. The Academy has a way in this category of anointing a plucky young newcomer, and the winner will be Hailee Steinfeld, who in fact played the lead in True Grit, no matter what the academy thinks. Melissa Leo and Amy Adams will split support for The Fighter.

Directing: Well, here I'm more or less forced to choose Tom Hooper of The King's Speech because he won the Directors Guild Award, and you know the mantra: The DGA winner wins the best director Oscar 90 percent of the time. Contrarian speculation would be risky.

Writing (original screenplay): Again, The King's Speech, by David Seidler. When a film becomes the chosen one, its glories trickle down, and I expect this to be a royal year. If I'm wrong, I'm very wrong. (The best screenplay, in terms of sheer writing, was Mike Leigh's Another Year, which could easily be adapted more or less whole for the stage.)

Writing (adapted screenplay): Here The Social Network will win its one major Oscar, although deserving more. Adaptation often means loosely inspired by, and Aaron Sorkin's brilliant dialogue and construction were wholly original (as were apparently many of his facts). You have to ask yourself what, precisely, the nominated Toy Story 3 was adapting, apart from the continuing plight of the toys.

Foreign language film: Here we have an interesting situation, because the voters in this category have to see all the nominees. That leads to victories by dark horses, like the wonderful Japanese corpse-preparation movie Departures a few years ago. This year, I've seen three of the five, but friends who have seen the Quebec film Incendies at festivals say it's great. If they're right, it's Incendies.

Documentary feature: What should win: Restrepo, a year in the life of an outpost in Afghanistan. What will win: Inside Job, about how Wall Street is run by crooks getting rich on our money.

Cinematography: Roger Deakins has been nominated nine times. This is the year he will win, for the magnificent look and feel of True Grit.

Film editing: The Social Network was all but brought to life through the skills of Angus Wall and Kirk Baxter, who took a complex group of interlocking plots, events and times, assembled them at breakneck speed and made the sucker play.

Art direction: Sometimes the art direction of a film just reaches out and rubs you by the chinny-chin-chin. Tim Burton is famous for the look of his films, and the work by Robert Stromberg and Karen O'Hara was magical in his Alice in Wonderland.

Makeup: Academy voters do not, I suspect, spend a lot of time thinking about this category, and often simply vote for the most makeup. That would indicate Rick Baker and Dave Elsey for The Wolfman. But I have an instinct not many of them saw it, and here I predict Adrien Morot, for the way he aged Paul Giamatti in Barney's Version. Warning: Baker has a good track record.

Music (original score): The most effective score in foreground terms was by Trent Reznor and Atticus Ross for The Social Network. But I believe a King's Speech year will also sweep up this Oscar, for Alexandre Desplat.

Music (original song): I would vote for "Coming Home," from Country Strong. But in recent years this category has tended to be dominated by animation, and Randy Newman will take home the Oscar for "We Belong Together," the heartfelt dirge of forgotten playthings in Disney/Pixar's Toy Story 3.

Visual effects: Continuing to apply my theory that in the lesser categories the winners tend to be the most visible in the most-seen films, I think this is where the sensational film Inception wins. It rolled up an entire city.

Sound editing: Inception, for its skill in negotiating dreamscapes and levels of reality. Not nominated was The Social Network, which juggled all those rapid-fire conversations.

Sound mixing: Also known as Sound Design, this is the category that creates the space that our ears sense around characters. I expect the winner to be The Social Network, which created intricate conversations in challenging locations like a Silicon Valley club.

Documentary short subject: Killing in the Name, a documentary about a Muslim who visits and questions the sources of the terrorist ideology that compelled a suicide bomber to kill 27 people at his wedding.

Short film (animated): Teddy Newton's Day and Night played before Toy Story, was original and inventive in the battle suggested by its title, and will win.

Short film (live action): I haven't seen these, but I've looked at their trailers at http://bit.ly/hJ4OPo, and on that basis I expect Na Wewe to win.