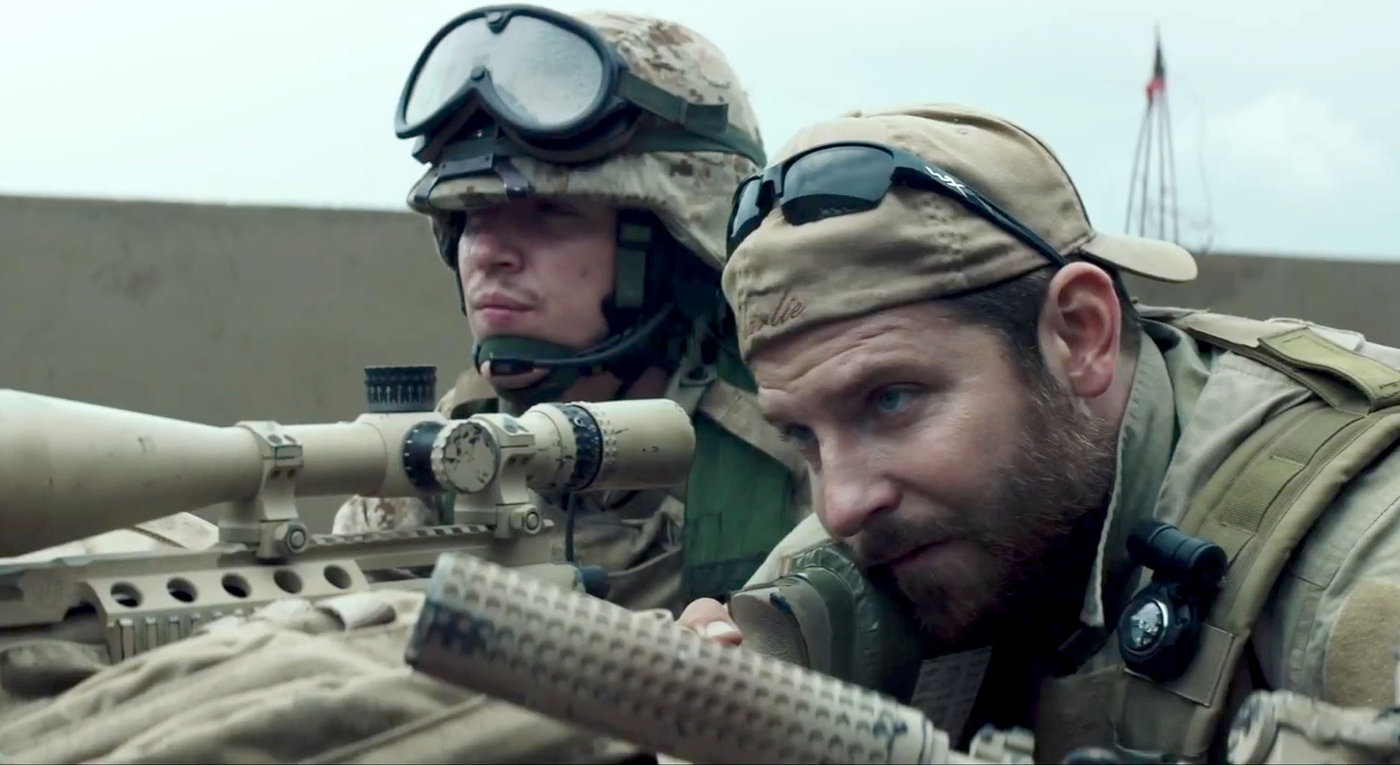 ﻿Many broken men populate Clint Eastwood’s knotty cinematic sandbox. An inciting action forces them to brazenly jump from normal life in search of revenge or salvation, burying themselves in self-righteousness and self-pity along the way. Still, despite this stubborn resolve their endgame often hinges on a homecoming of sorts, whether it’s written in blood or tears. By the end of 2014, Eastwood will have released two new films in very different genres that complicate this motif. Both Jersey Boys and American Sniper examine elite professionals whose work takes them on the road, away from the domestic confines of family and femininity to an isolated place where chaotic situations are common. But instead of doing everything in their power to return home, these men manipulate the classic “hero’s journey” as a selfish way to avoid the complex perspectives of those they’ve left behind or forgotten. Being on tour means forging a fantasy in which you are always center stage, a living legend.

“You want to hear the real story? I’m the one you want to talk to.”

Tommy DeVito (Vincent Piazza) lies for a living. Yet he’s first out of the gate to play narrator in Eastwood’s woozy and odd adaptation of the musical Jersey Boys. Controlling story means you can arrange its structure, the way it’s told and sold to the audience. Tommy understands this more so than Frankie Valli (John Lloyd Young), Nick Massi (Michael Lomenda) or lyrical wunderkind Bob Gaudio (Erich Bergen), the other members of the musical group the Four Seasons who each get a turn breaking the fourth wall of the film during their rise up the pop charts in the 1950s and 60s. As a result, the first half of Jersey Boys rides high on confidence, the creation of star personas and cultural myths. Later, the narrative makes a striking left turn, flashing back in jarring fashion to examine the material’s seedier elements that Frankie’s version has repressed. It’s the biopic as carbon copy; two historical perspectives layered atop each other that are finally being ripped apart.

Some critics have labeled Eastwood’s direction in Jersey Boys lazy or wooden, but I’d wager it’s downright radical. The film operates on a deceptive formal level that addresses a series of parallels between blind ambition, success, and ego in comparison to the darker experiences of those outside the main characters’ orbit. Founded on denial and resistance, this dichotomy produces collateral damage pushed to the side until it can no longer be ignored, specifically the sudden downfall of Frankie’s tormented daughter late in the film. Something very similar occurs in Eastwood’s other 2014 release, the Chris Kyle biopic American Sniper starring a beefed up Bradley Cooper as the most lethal marksman in American Navy history. The release of both films in such close proximity reveals Eastwood’s deep interest in the limitations and consequences of tunnel vision, both as a character trait for talented individuals and a false bottom structuring device for the “based-on-the-true story” genre.

“God’s gift from up above.”

Auteurist traits are described as heavenly blessings in both films, most notably Frankie’s hypnotic voice, Bob’s dynamic prose, and Kyle’s eagle eye. Rarely mentioned are the unforeseen curses that arrive because these men pursue their dreams. At the beginning of Jersey Boys Tom Stern’s camera descends from the sky onto Belleville, New Jersey circa 1951, suggesting a higher power has bestowed upon them an opportunity to escape the neighborhood and play in a larger fishpond. Later, Frankie and Nick break into a church to practice vocal ranges, while gangster Gyp DeCarlo (Christopher Walken) is moved to tears by Frankie’s rendition of “My Mother’s Eyes.” By so thoroughly connecting music and artistic creation with omniscience and faith Eastwood deliberately sets up the Four Seasons’ creation story as something biblical. Or at least that’s how the guys see it.

In American Sniper, the opening shot is already mired in the dirt and mud of Fallujah, tracking along the belly of a tank as groupings of U.S. Marines push forward up a decimated urban street. Kyle plays protector, perched atop a building with his long-range sniper rifle. The melodic and playful opening of Jersey Boys is long gone, replaced by the rhythmic hum of Arabic prayer playing over a loud speaker and the mechanized sounds of warfare. When a woman and her child appear on the street carrying a grenade, Kyle’s spit-second decision to shoot or hold fast incites a flashback. In Jersey Boys, the temporal shift comes when the group finally learns of Tommy’s gambling debt immediately before a career-changing performance on The Ed Sullivan Show.

The flashback structure of American Sniper might be more familiar in relation to the experimental model that perforates Jersey Boys, but it reinforces the origins of Kyle’s fundamental ideology about western heroism, cowboy culture, and something his doomed best friend ultimately calls a “savior complex.” We see him as a young lad hunting and killing a deer for the first time, then listening to his father at the dinner table explain the virtues of “being blessed with the gift of aggression” to defeat the wolves of the world. Kyle’s manly perspective and its evolution/justification over time are the focus of Eastwood’s gaze during this sequence, which gets challenged by his future wife Taya (Sienna Miller) during their first meet cute at a bar.  “It’s pretty egotistical to think you can protect us all,” she proclaims. Kyle’s confident retort hints at his overwhelming (and problematic) refusal to see any version of the world other than his own.

When Bob explains the patriarchal metaphor behind his pop ballad to Tommy during a particularly great musical montage in Jersey Boys, it’s already abundantly clear these two men see the world in contrasting ways. But at least they’re trying to communicate as band members and artitsts. The same can’t be said of the relationship between Frankie and wife Mary (Renée Marino); the distraught couple is doomed from the beginning, often arguing over his time spent away from their home and family. Vocally angelic and able to connect emotionally with strangers through song, he can’t find common ground with a significant other who spends much of Jersey Boys either drunkenly lashing out or screaming for help from the fringes. Is Eastwood less interested in her struggle or does he just understand that Frankie prefers avoidance instead of responsibility?

The marriage (and eventual divorce) storyline feels tacked on in Jersey Boys, adding to the film’s overall clunky feel. But when looked at from the vantage point of a weak man failing to take an active role in his life removed from the limelight, Frankie’s impotence and flair for retreat take on tragic implications. His daughter’s third act suicide acts like an exclamation point for this theme.

Kyle’s incessant denial of his own wife’s wishes and needs are equally damning in American Sniper, a pattern of selfishness defining the epic sandstorm shootout set behind enemy lines in Sadr City. Having finally secured the chance to kill the Iraqi sniper very much his equal, Kyle chooses to put his entire squad at risk by taking the shot from over a mile away. Eastwood’s not normally known for action set pieces, but the ensuing battle between Kyle’s platoon and a swath of Iraqi insurgents is marvelous and tense. Undercutting the formal achievement is the melodrama produced by Kyle’s selfish actions amid the violence. It is here when he decides to call home and tell his wife that, “I’m ready to come home,” bullets snapping around him from all directions. Understandably, Taya listens horrified that her husband won’t make it home.

What this sequence reveals about Kyle, who has long been nicknamed “The Legend” by his compatriots, speaks volumes about the futility of fabricated masculinity and the selfishness lying beneath the facade. As presented by American Sniper, Kyle believes that his ongoing battle with Mustafa (Sammy Sheik) and other awfully cartoonish Iraqi boogiemen transcends every single other experience, that occasionally brushes up against his story, much like Tommy and Frankie’s career impedes on their family relationships. He blames a fallen soldier for questioning the war, and there’s little mention of his frazzled brother also serving overseas. Finally, look at the scene where he comes face to face with a wounded soldier who he personally saved years before; the awkwardness and anxiousness on Kyle’s face might have less to do with PTSD than the realization his efforts are more self-serving than originally thought.

“We take care of each other.”

While shooting sniper rifles in the countryside toward the end of American Sniper, a handicapped veteran suspiciously asks Kyle why he spends so much time with ex-military personnel when he has a family at home. The above response proves to be a continuation of his ongoing obsession with higher purposes and self-delusion. How else can one explain the eerily resonant medium close up of Taya as she watches her husband leave for the last time? The stretched duration is uncomfortable, lingering on a woman who knows that her husband has a penchant for mistaking good will for self-preservation. Kyle was killed in February of 2013 by one of the very veterans he was trying to help council after retiring from the Navy SEALS, an irony not lost on Eastwood.

Jersey Boys provides a much warmer denouement, yet it’s still very much a closing argument on the way men fail to separate their self from the impact they make on the world. After nearly three decades apart, the Four Seasons perform together at their induction into the Rock n’ Roll Hall of Fame. Once again opting for direct address narration, each band member finally begins to tell the truth. “Everybody remembers it the way they need to,” Tommy says, wonderfully admitting that his own memory of success completely masked a dynamic reality unexplored. With this confession in mind Eastwood affords them all a classic musical number through a film set posing as the old neighborhood. Paced to “Sherry,” old men and women age backwards and become young again, their voices collectively providing an ultimate encore for a pop sound that has long since carried over into the public zeitgeist.

American Sniper ends in sorrow with a procession of its own – actual footage of Kyle’s funeral parade play over the credits. Here, Eastwood makes an admission of his own; Kyle, as with any historical subject, will remain an enigma, and the proceeding film has simply grappled with one particular (and not altogether flattering) version of the man. In this context, as with Jersey Boys, we begin to care less about “truth” and more about shades of perception, how men dignify retreat from family by promoting the glory of isolation and skill. When you’re stuck in the “moment between heartbeats,” as Kyle’s sniper instructor puts it pulling the trigger or belting out a tune becomes an unconscious effort. Scarily, nothing else really matters.