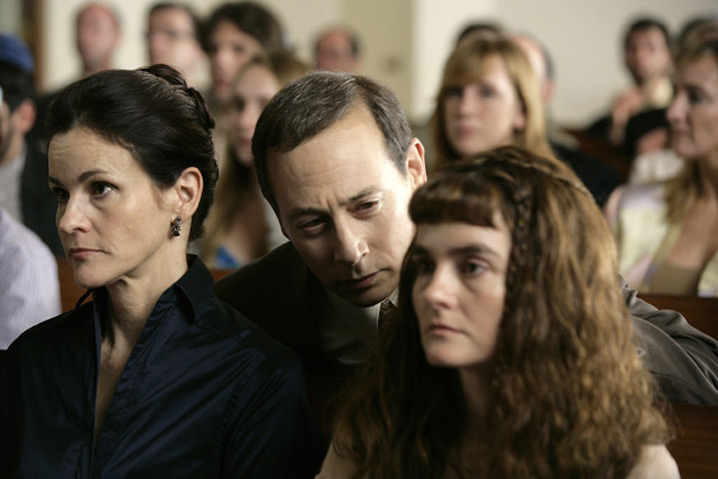 As with a lot of still-young, experimental filmmakers, Claire Denis’ strengths are her weaknesses: characters without motivation or thought who act only by instinct with whatever’s going on around them, like bugs whose raison d’etre is sensory perception; an unrelenting attempt to bring the viewer “into the moment” of these perceptions by rubbing his face against all sorts of disconnected textures from within the scene; an unnerving nonchalance about terrible things, as if everyone involved in the film, from actor to cinematographer, were always high and laughing; a penchant for ellipses, scrambled structure, and anecdote to distract from the key events of the film the characters should and would be thinking about.

In the right context, with enough remove from historical and social habit, she makes terrific films: Beau Travail. In the wrong context, there is no context: 35 Shots of Rum with its specificity of location seems to be about a modern black family in Paris but mutes its characters so that nobody can complain that modern life isn’t an Ozu film, that girls don’t have to get married and usually don’t anymore here, and that most probably wouldn’t want to stay with their father for the rest of their lives anyway. These mores, imported straight from Late Spring, are taken for granted, and Denis provides her own defense with insipid Tenderstix riffs over floating train-track shots to imply everyone in the film is drifting through life as the music takes them.

White Material’s also a film about autonomy in which nobody has any. The half-assed script shoehorns characters and context to colonial symbols despite all common sense; Isabel Huppert’s non-thinking reticence to articulate anything only makes her the every-colonialist and what the film does to her son character is worse. Seen almost exclusively from the back of her head–a new Denis method for abstracting her character from thought and motivation into a cipher, seen also in last year’s Headless Woman–Huppert stands around her African plantation while locals yell at her that she doesn’t understand anything, that there’s a war coming, that they’ll kill her, that there are all sorts of unspecified urgent things happening, an impression confirmed by swelling music, lots of yelling, and frantic camera movements and cutting. Making her character the strong silent type who thinks she’s living a decent life because she runs a business and treats everyone fairly even as she stands for all manners of colonial abuse works well symbolically and even aesthetically–The Headless Woman was also making an identical critique–but in a precise context it’s bosh: how could any white businesswoman successful in a foreign country be the least bit naive as to the interests and biases of the people around her?

The film sets out the problem for itself as to what Huppert, shrewd businesswoman that she’s been, is failing to comprehend in a couple days of upheaval, and the film waits for Denis, who grew up in Africa, to cut through the generalizations of an any-African-country with an any-guerilla-war to identify the actual political reasons anyone would have for struggling for their sides and how they mean to achieve it. But each man’s a faceless army and the film remains as dumbfounded and uninterested in their reasons as Huppert. Denis never comes close to a single sentence from Nostromo, just as intimate in detail and digression, to cut through the hallucinations of colonial war to its brute logic, the self-same logic that in Conrad has spurred 50 different characters with 50 different habits, philosophies, inclinations, moods, wants, backgrounds, voices, and means to treat each other brutally as they do on the crux of civilization:

“An immense desolation, the dread of her own continued life, descended upon the first lady of Sulaco. With a prophetic vision she saw herself surviving alone the degradation of her young ideal of life, of love, of work–all alone in the Treasure House of the World. The profound, blind, suffering expression of a painful dream settled on her face with its closed eyes. In the indistinct voice of an unlucky sleeper lying passive in the grip of a merciless nightmare, she stammered out aimlessly the words–

But the script’s concerns aren’t Denis’; her own interest, like Lucrecia Martel’s, is how the world in its horrors would register to a deaf, dumb, and blind girl who at best feels vague waves of emotion at being told things are awful around her and who would prefer to go back to bed. Taken as somewhere beyond realism, at the point where reality collapses and local boys with machetes hang out in sofa chairs in a mansion and wait to kill anyone who comes by, where the voice of the apocalypse is a reggae jockey forecasting hell as he nods in time to the music, where a skinhead with a huge dick goes out biking with a rifle and smiles thinking of all the people’s he’s gonna kill, and where Huppert is stuck with flashbacks and hallucinations of amber-lit fortune tellers, White Material becomes a sweet portrait of instinct illuminated and unleashed in a revolution’s in-between moments, as long as nobody’s talking to anyone else and is in contact with anyone but themselves. Shot in handheld ‘scope, with just the outer whisps of Huppert’s golden hair lit like a halo against a dark and stormy night, the film plays as expressionist documentary, forgoing the logic of narrative and psychology in favor of self-contained anecdotes that, unmoored from any reason for being there, make war seem weird again.

It’s a dubious conceit, but one can always just read Nostromo instead. With its harried, associative editing, far from the contemplative pastiche of Rum and L’Intrus, Denis discards moments like seeds planted for entire stories and side-plots that aren’t necessarily brought to fruition, and there’s always some purpose for the jerkiness. Where Jane Campion also tried to give a sense of movement in a scene where it wasn’t a priori by lots of flitting close-ups to faces and fabrics and then back again to establishing shots, Denis makes shots count. When she jumps into a close-up from a faraway shot, it’s because the film itself is moving into that space: as she cuts from outside a house to someone near the door, it’s because the next shots will continue into the house and look in the bathroom before working their way out to another angle. These “impressionistic” coups that guide the film through the detritus of a world where borders collapse, have a purpose: they give order to sketchbook. For whatever reason, this minor Denis is a major film.

Michael Joshua Rowin said it here. Again, Solondz wants to use his 13-year old innocent as a litmus test for a dirty world, but Solondz’s ideas about innocence and experience–kids are just dumb, adults just have no self-control; everyone is selfish, compassion is a game people play to get attention, and the only real guilt is self-taught liberal guilt also borne out of narcissism and the need to think we matter–explicated every few minutes by one character to another in shot-revere-shots for 90 minutes, are not just rote and deterministic and patronizing and boneheaded and as glib as any of the characters, as usual, but empirically wrong and corrupt. Solondz can feign sympathy with Bergman pyrotechnics lambasting petty jealousies as the cause of greater strife, but Life During Wartime is another revenge of the nerds, an attack on bullies, even in sheep’s clothing, in inexcusable platonic form. His philosophical starting-point remains that of Crash inside-out, that people are complex for having exactly two, perfectly opposed personalities: the one they show (nice in Solondz, evil in Crash) and the one they really are (sinners in Solondz, saints in Crash). Solondz’s idea of sympathy remains people feeling bad for being monsters. If he had an ounce of artistic merit, he might be a decent medieval filmmaker in the land of fantasy. He’s not.

If I bothered to see more Breillat films, I’d probably say this is the only one I like. Shown on dirty beta, like Life During Wartime, Bluebeard is passable anyway for its two sets of characters–two young sisters in modern times reading the ancient fairy tale about two older sisters–who all know from moment one where this old, obvious story has to go, and so go through the motions in turns of skittish anticipation, lip-biting digressions, and in Bluebeard’s case, lumbering regret for having to maintain his reputation by any means necessary as the basest man in the kingdom, and determination to do so with the Von Stroheimish respect of a true classman. Only once does the fourth wall break as one modern girl steps into the story; the rest is the characters, like any poor seamstress-turned-princess, enjoying the dress-up of the premise, the rites of aristocracy, and the small break-out moments of the total beastliness underlying it all: a husband and wife tearing into a chicken with bare teeth; the slaughter of a duck. Breillat is not far from Solondz–people are animals under the niceties, and that’s it–but she likes them that way.