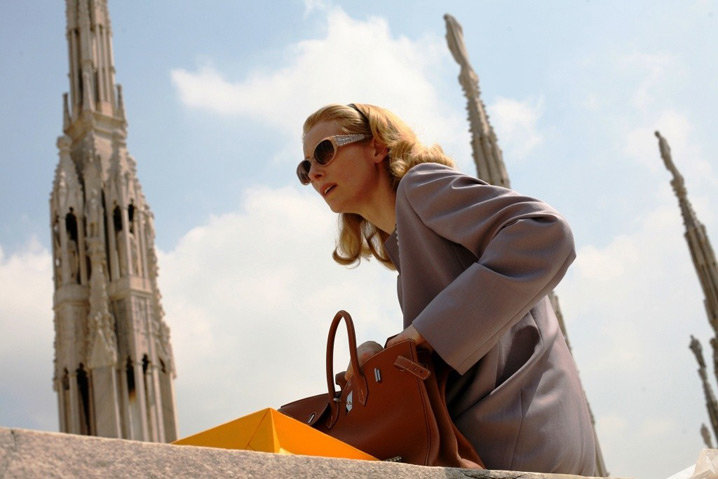 A couple of days ago I saw Luca Guadagnino's grandiose melodrama I Am Love.  I didn't like it much at all, but I did find it fascinating, so much so in fact that 10 minutes in I whipped out my notebook and started scrawling some thoughts (something I rarely do).  I've fleshed out some of those observations below, in an informal attempt to coming to grips with this pristine and unusual film.  Please excuse the informality and lack of comprehensive argument and evidence!

• The bravura watchlist: I don't know what it is about filmmakers these days, but despite the relentless, aggressive stylization of much of cinema, rare does a director seem to have the mysterious quality of bravura.  I'm not sure I have a definition for that term quite yet, but I think it has something to do with an extraverted audacity of style, of camera movement, editing, and composition, which almost always has a presumption, a showiness, a pointing-out about it that is different than the pretension of so-called "empty" stylistics, like those of Michael Bay.  I'm thinking of, for example, Rouben Mamoulian, (Eisenstein?,) Hitchcock, Alain Resnais, Scorsese, and Desplechin.  Luca Guadagnino seems of the kind; despite the touch  of the opulent melodramas of Visconti and Sirk in I Am Love, it is the aggressiveness with which Guadagnino, DP Yorick Le Saux (frequent Assayas collaborator), and editor Walter Fasano (Argento's recent editor and co-writer) rush the images and image movement that puts the film closer in dizzy fleetness to something like A Christmas Tale or Gangs of New York.  Take. Camera. Risks.  Beyond that, though, one has to ask why the cinema is being mobilized in such a way.  It is clear for a number of those filmmakers noted above, even Mamoulian, but I'm not sure why I Am Love looks and moves the way it does.  I think my main problem with the film is, for lack of a better term, its storytelling enunciation: why is the film being "told" in this manner?  (Next up on the bravura watchlist, the quasi-entry: Gasper Noe's Enter the Void.)

• It is always welcome to see a film that has a very specific class-based setting, one which fundamentally informs the mise-en-scène.  So many films take for granted the upper-middle/upper/upper-upper class milieu their worlds exist in.  For a brief reel or so I Am Love is a relief because it revels in and springs from the faux-aristocratic family at its center (faux as their wealth is founded on garment manufacturing, and seems to have come about only within the 20th century).  But then one finds that Guadagnino doesn't take a position about this class, is not embracing it, is not satirizing it, is not observing it.  Class for the film is mere window-dressing, albeit very specific and materially precise window-dressing.  +1 for putting it at the forefront, impossible to ignore and not ponder, but -2 for doing nothing interesting with it.

• Possible explanation of the above: class as an aesthetic.  This is not a film so much a fashion spread, investigated by Le Saux's roving camera.  Guadagnino is mobilizing a fashion ad.  A strange, European version of that Ikea scene in Fight Club—the entire movie is less narrative than a descriptive catalog of objects, costumes, interiors, hairdos, entitled faces full of pathos (with emphasis on the elegant faces, not the pathos). Except this time we don't get the prices, as they are beyond our means (and it is rude to ask).

• In the scheme of this aesthetic, even macro shots of women eating prawns is supposed to be beautiful.  Actually, it is horrid, perhaps the most horrid and sensual thing such a chaste and superficially impressionistic movie could possibly show us.  It's like that gross, parodic scene of eating in Leone's Once Upon a Time in the West, only unaware how disturbing and satiric it is.

• To return again to my central question: what is the point of view of this film?  It reminds me of (English translations of) mid-19th century French novels, with its descriptive distance which prefers to tell us something is happening rather than show us what is happening.  It is a style far better suited for literature; here, the film constantly seems like it is illustrating, that someone wrote down what makes up a typical wealthy dinner and then the filmmakers adroitly cataloged and photographed those written elements.  This sounds potentially materialist, or perhaps in the realm of structuralist cinema (Akerman, Resnais, maybe Duras), building a world from objects and a structure of that world connecting the objects, but I Am Love instead attempts a strange kind of distanced impressionism that keeps the pleasure or meaning of the film from being located in, say, the objects it is cataloging, or the way the cataloging-describing interacts with the narrative or with itself.

• This impressionism, it isn't of the kind familiar to Wong Kar-wai, Terrence Malick, Claire Denis, and Michael Mann, all of whom generally film with an eye towards capturing cinematically the mood, feeling, aspect, etc. of their characters and their world.  I Am Love's impressionism, as evident in a scene such as the first kiss in the countryside, is motivated not from an interpretation of what's inside the film (like digital fluidity coming from John Dilinger's lifestyle of movement in Public Enemies), but from outside: this is how the narrator is telling the film.  But since this is not a novel, and there is no actual narrator (in the sense of a voiceover or storytelling structure, like this tale is being told by someone), the rationale for this impressionism is absent, and as such feels distant, imprecise, layered over the film's setting.  A friend rightly pointed out, after some discussion, that the film feels like it's being told as a flashback, but there is no motivating force or evidence in the film itself that supports this idea, even if that seems a very accurate description of the style.  Again we return to taking a position: such a forceful style, like any style (meaning: form), intrinsically takes a position in relation to its subject, what is being filmed.  But because I sense no firmness or motivation or direction from the stylization in I Am Love, the result is like a sound drained of its inflection, its tone, and source, trapped in an empty room.  The film simply moves without being moving.

• Part of this failure is no doubt related to the film world being treated as a fashion spread (see above), and this aspect in conjunction with the gradual revelation that the people in I Am Love are not being treated as human beings, nor as "types" or caricatures, but rather as figures, something akin almost to models (not in the Bressonian sense, of course).  When passion is felt or tragedy strikes, we see these "human" feelings radiate from the people like light mutedly reflected off a dull stone sculpture.  When Tilda Swinton has a rendezvous with her lover for a second time, the sexiness and tension of the encounter is due to a precisely art-directed combination of orange slacks, white blouse, beaded necklace hanging inside the shirt's collar, and a new perm.  I'm sure some humanity escapes the advertisement, this is after all (above all?) a Tilda Swinton movie, and she like all great stars is both embroiled in the texture of the film as much as she transcends it (her lover, played by Edoardo Gabbriellini, also shows some soul and simplicity in the film, and always rubs a bit strange against all the other acting, and the tone in general).  But for the most part these are signifiers (the son heir, the burgeoning lesbian, the pregnant outsider wife) hung on empty faces and bodies.

• To "solve" this problem of distance, of cataloging, the film takes on a general tone, within its "impressionistic" framework, of a fluttering, dreamlike or trance-like state (see the previous observation that it film overall feels like a giant flashback), filled to the brim with the kind of precise, and usually superfluous, details dreams often are, presented at a pace and with a logic "explained" by a sensory letting go, an exploration.  In fact, the film occasionally reminded me of Japanese New Wave filmmaker Yoshida Kiju (Eros Plus Massacre), who, in his increasingly more radical work of the late 60s and early 70s, seemed to be editing and changing angles simply with an interest in seeing what this thing looked like from over here, and then maybe from over here, and oh, why not this way as well?  Those films, despite their frigidity and austerity, had a curiosity about their subjects, it was like Yoshida picked his topic (be it the film, a scene, or an object) and opted to give it its fair due of cinematic framing, often radically so.  I Am Love also has a sense of arbitrary filming, but because of its velocity, and its tying of this velocity to the story of a woman changing through a love affair, the approach seems less generous, less sincere, less interesting, less interested.  I'm wondering if there was a massively conceptualized intended effect that catastrophically did not work, in the end.  It is hard to otherwise explain the film's approach to its story and film world.