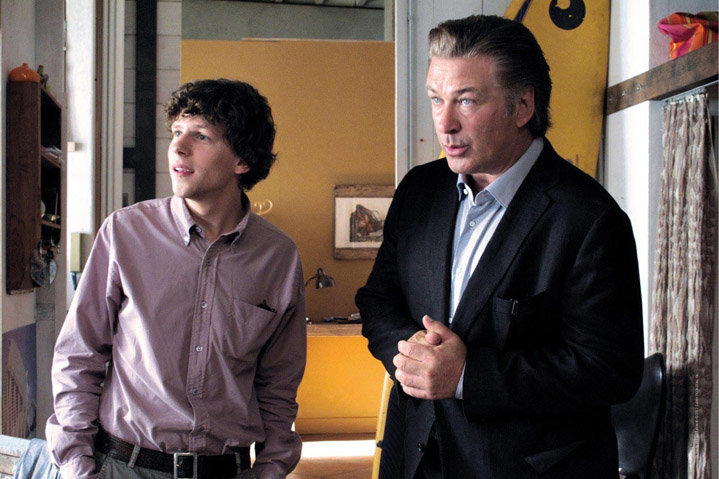 Continuing the tone set by last year's Midnight in Paris, Woody Allen's new film is relaxed, easy-to-digest, light entertainment—﻿﻿middle-brow fluff done right, in other words. Like a Bertrand Blier movie without the ambition or the mean smarts, it trades in narrative left turns, tricky structures, sustained Surrealist gags, caricature characters, and theatrical devices that have been transposed to filmmaking; it doesn't add up to much—﻿﻿﻿some good laughs, a handful of basic observations about human behavior, and the same moral about being content with your place in the world that Allen's been preaching for the last 40 years—﻿﻿﻿but there's no sense faulting a movie for slightness when it's slight by design.

To Rome with Love consists of four intercut stories. They aren't connected in any way except the setting, and though the film starts in the morning and ends in the evening, they don't share a timeframe. In ascending order of narrative complexity, they are:

Every story ends more or less the same way: having had a brief chance at success, the central self-pitying failure (Benigni, Tiberi, Allen, Baldwin / Eisenberg) learns to be happy with the imperfect life they've lead (note: this is how 90% of all Woody Allen films end). The view of Rome is tourist-brochure material, the music cues are head-slappingly obvious ("Volare" and Verdi!), there's little sense of what working life is like (though three of the stories revolve around lower-middle-class Italians), and all of the men wear their shirts tucked-in—﻿﻿﻿﻿in short, the film is set squarely in Allen's comfort zone.

And yet the funny thing about Allen—﻿﻿﻿﻿﻿a filmmaker of notoriously limited tastes and themes—﻿﻿﻿﻿﻿is that whenever he sets out to make something "profound" or "serious"—﻿﻿﻿﻿as he did throughout the middle portion of his career—﻿﻿﻿﻿it tends to reveal all of his weaknesses, whereas the films made for no clear purpose except to entertain an audience—﻿﻿﻿﻿﻿like his earliest and also his most recent features, including this one—﻿﻿﻿﻿﻿usually play to all of his strengths.

He may not be much of a visual thinker, but he knows a good cinematographer when he sees one (Darius Khondji﻿, in this case) and how medium-shots and close-ups can work with the rhythm of the dialogue. He may be not have much insight or depth as a dramatist, but he remains one of the finest set-up-and-punchline writers in American comedy. He may not be the sort of director who pushes actors to do anything they haven't done before, but he almost never miscasts; his grasp of his three favorite subjects—﻿﻿﻿﻿﻿﻿film, literature, and music—﻿﻿﻿﻿﻿often comes off as thin, but he possesses an encyclopedic knowledge of contemporary actors' ranges and screen personas. Made with no pretension and with small aspirations, To Rome with Love may be small potatoes stuff, but it showcases Allen doing what he does better than pretty much any American director: writing light, diverting comedy and directing actors to hit every comic beat just right.