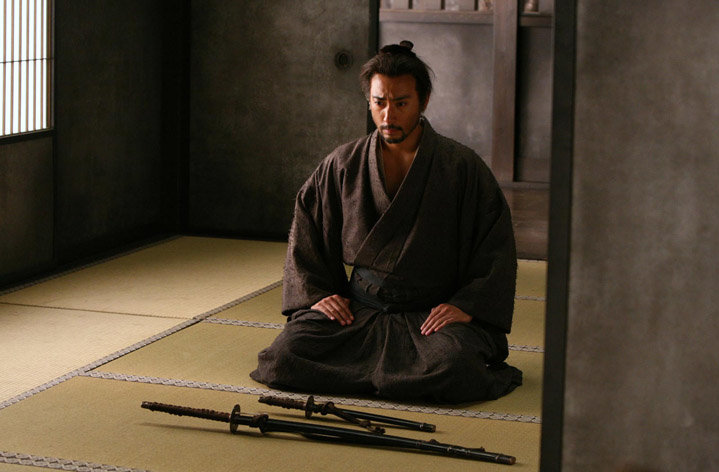 A remake of Masaki Kobayashi's Harakiri (1962), Takashi Miike's new film Hara-kiri: Death of a Samurai retains much of the original's plot, imagery, and production design; even the sets and props appear to be near-replicas of ones in the 1962 film. And yet Miike's movie is completely its own thing, nothing like Kobayashi's—﻿﻿owing in part to the directors' radically different attitudes toward the subject matter, and to the two films' diametrically-opposed conceptions of space and movement. A big pontificator with an arty style, Kobayashi favored complex sequence shots, dolly-ins from behind, smash zooms, and extremely wide angle lenses that warp the space around the edges of the frame, making it appear as though rooms and bodies are constantly expanding and contracting; his Harakiri is an angry, slow-burn anti-chanbara flick—dramatically heightened, spatially wonky, accusatory. ﻿

Miike is no stranger to attacking culturally-ingrained hypocrisy (for just one obvious example, see Izo [2004]), and Hara-kiri's plot—﻿which involves a mysterious, sad-eyed loner (kabuki actor Ebizô Ichikawa﻿ XI)﻿ coming to a noble house to avenge the death of a desperate ronin (Eita) who was forced to commit seppuku by the clan's retainers—﻿﻿affords him plenty of opportunities.

But unlike Kobayashi, Miike doesn't target the individual, hypocritical samurai. His Hara-kiri is much more of a straightforward genre film: ﻿﻿a revenge melodrama, and deftly-executed to boot—﻿﻿﻿frequently engrossing, with a closing battle that shows the same knack for choreographing relentless, large-scale action that Miike showcased in his previous collaboration with highbrow super-producer Jeremy Thomas, 13 Assassins (2010; released theatrically in the US last year).﻿

Like 13 Assassins, the film is tightly-structured, with the "revenge" occurring in the first and last half-hours, and the "melodrama" taking up the hour in the middle. This neat narrative arrangement is mirrored in film's precise sense of visual geometry and its careful mise-en-scene; the way Miike uses recurring details—﻿﻿﻿﻿a red suit of ceremonial armor, a stack of books, a ghostly white cat—﻿﻿﻿﻿is about as close as the anything-goes auteur has come to completely classical filmmaking. 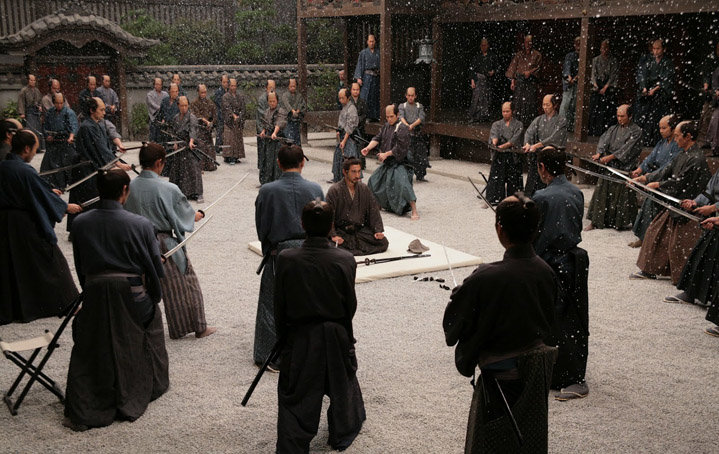 That isn't to say, though, that Hara-kiri is just an accomplished piece of genre work without a moral viewpoint. It's just that Miike's targets aren't in the plot, they're in the style—﻿﻿in the way people carry themselves and interact with the world around them, in ﻿a whole way of conducting life, of experiencing and organizing reality.  ﻿

Hara-kiri's samurai are defined by how they move—﻿﻿﻿or, rather, how they don't. A lot of the time, they're still as statues. In the opening scenes, they're often photographed head-on, placed in the middle of the frame, bounded on both sides by empty widescreen space. Even the close-ups of their faces are composed in deep focus (the fixation on visual depth is understandable: Hara-kiri is Miike's first film to be shot in 3D, and the first film made in the format to have screened in competition at Cannes﻿). When the camera moves, it pivots around their static bodies.

The spaces within which they exist—﻿﻿﻿﻿like the clan compound, with its large single-purpose rooms—﻿﻿﻿﻿﻿become inseparable from their characters (in contrast, much of Kobayashi's film is composed so that the actors are dwarfed by the sets, making them look like pawns in a cruel social game). The samurai live in shadows. When they move, it's in over-sized, symbolic, violent bursts; only head retainer Kageyu﻿ (perennial Kiyoshi Kurosawa lead Kôji Yakusho)﻿—﻿﻿﻿﻿﻿a much more sympathetic figure here than in the original—﻿﻿﻿﻿﻿moves like a human, hobbling from room to room with a dignified limp.

Sitting, serving food, sliding open a door—﻿﻿﻿﻿﻿﻿these gestures all register as rehearsed rituals, as grand and instinct-less as the drawing of a sword. The story's moral—﻿﻿﻿that a culture built around appearing dignified in effect robs people of their dignity—﻿﻿﻿doesn't need to be baldly stated; it's implicit in the physical presence of these characters. The samurai are furniture.﻿

The film's middle hour, in contrast, feels organic. In lieu of the clan compound's gloomy murk-world of shōji﻿ and fusuma﻿ panels, there are streams, ponds, trees swaying in the breeze. The characters—﻿﻿﻿﻿impoverished members of an unfairly disgraced and disbanded clan—﻿﻿﻿﻿﻿live in cramped, asymmetrical spaces; they arrange themselves as they see fit, slouch when they want to, and move unsteadily and instinctively. The rhythm of the film changes, too; gone is the steady cut-cut-cut clip of the samurai scenes. Miike even manages to get in one of his trademark too-long static shots in a scene of Eita enjoying a meal in the presence of the girl he loves. ﻿

This contrast makes Ichikawa﻿'s lead performance all the more remarkable, since his character has to convincingly navigate both worlds—﻿﻿﻿﻿﻿to move with false dignity in the clan's world, and with intuition and emotion in hardscrabble one that exists outside the compound walls. Possessing a deep, feline voice and a profoundly expressive face, he is both the plot's moral center and an encapsulation of Miike's approach in the film—﻿﻿﻿to thoroughly inhabit one way of moving and living in order to criticize it, and another in order to defend it.