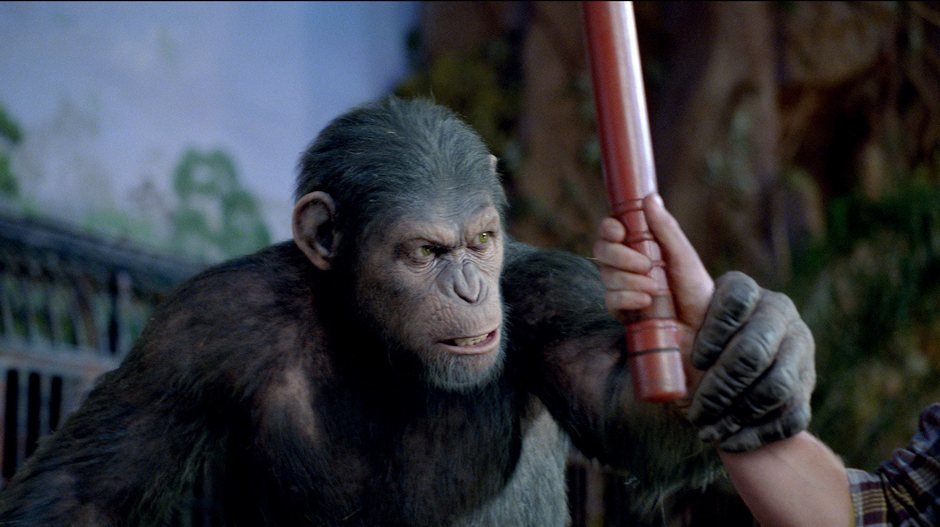 Where Nabokov's ape drew the bars of its own cage, the simian insurrectionists of Rise of the Planet of the Apes prefer to throw them like spears. The progress of the protagonist, a chimp named Caesar whose scientifically-engineered intelligence enhances the delight of discovery and the awareness of pain, is measured in the animal’s green eyes: A teen-misfit melodrama and a jailhouse saga, Rupert Wyatt's film is about the hardening of a juvenile gaze as a worldview widens and darkens. However, despite the vivid peepers—and Andy Serkis’ motion-captured body movements, which at times reach Denis Lavant-worthy levels of physical expressiveness—the digitally composed critter remains too weightless to fill the screen, its streamlined CGI presence lacking the tangible pantomime of the earlier Apes installments, where straight presentations of Pierre Boulle’s science-fiction parables could drift irresistibly into droll tableaux of aging Shakespearean pros trying to orate through layers of rubbery makeup. (Even the most tingling scene, the moment when a paw curls into a fist and silence gives way to protest, is a ghostly shadow of a similar bit from J. Lee Thompson's Conquest of the Planet of the Apes, the series' most radicalized entry.) Paced like a rocket but de-politicized and de-poeticized, adorned with sprawling camera movements yet trapped in shallow screen space, the film clomps through with a flatness that makes its vision of the beginning of mankind’s end seem weirdly soothing.

For spiky cinema and biting subtext, Attack the Block easily outclasses Wyatt's blockbuster. While Rise of the Planet of the Apes skims over San Francisco locales for gaseous, impersonal set pieces, Joe Cornish's scrappy debut offers a thorough study of a South London housing project, photographing its battered flats, hallways and elevators with more pungent empathy than anything by Andrea Arnold. This strong sense of place provides a necessary anchor, because the compound will in no time be crawling with interplanetary furballs equipped with phosphorescent fangs. "World War III out there, you couldn't tell," one dweller grouses to the nurse (Jodie Whittaker) who, in order to survive one long Guy Fawkes Night, will become allies with the leader (John Boyega, magnetic) of the posse of teen hooligans who had mugged her two scenes earlier. That it takes a swarm of flesh-munching aliens for wayward youngsters to make sense of their anger and confusion is just one of Cornish's punchlines, though there's nothing snarky about his portrayal of class and racial abrasion, in which kids are literally devoured, adults are either stoners, gangsters or cops, and a prematurely stern-faced thug (with Spiderman jammies in his bedroom) learns the hard way about heroism. Packing plenty of punch into its modest, gory canvas, Attack the Block is a prime example of what Kent Jones perceptively noted regarding John Carpenter’s They Live, the B-movie's ability to penetrate working-class strife while working within unpretentious genre frames.