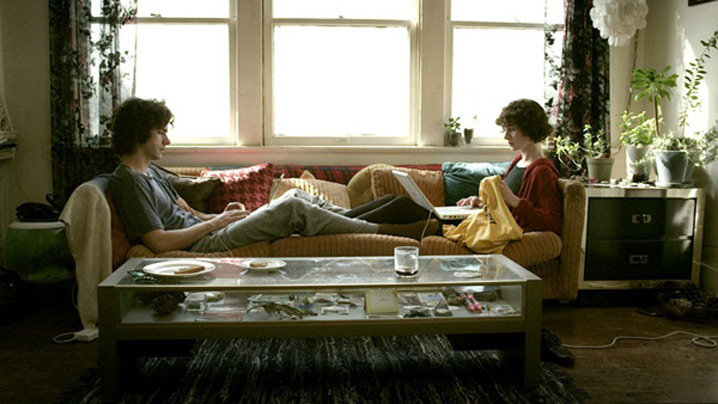 The Future begins like Me and You and Everyone We Know, with Miranda July talking to herself in weird voices. That in her latest work this takes the form of a caged stray cat named Paw Paw (played by a pair of furry, gesticulating puppet limbs) that comments on the story in a guttural lilt supplied by the writer-director-actress can only promise gruesome tweeness. It's something of a small miracle, then, that for much of the time The Future manages to not only sidestep the cutesy trapdoors it sets for itself, but also speaks to that same cuteness as the root malady in its portrait of collective unease. An early shot finds the two L.A. thirtysomethings played by July and Hamish Linklater lounging on the same couch, facing each other yet engrossed in their separate laptops, sporting matching curly coifs and droopy singsongs like Janus heads of complacent preciosity. The couple's decision to adopt the ailing feline unsettles this insular world, and molasses-like paralysis abruptly gives way to temporal volatility: Linklater sighs that "forty might as well be fifty" while an octogenarian version of himself assures that he’s really in "the middle of the beginning" of life, and decades zip by before the stunned July's eyes while in some alternate reality everything remains frozen at 3:14 a.m. Before the couple realizes it, they've lost track of their original goals and dreams and the forgotten Paw Paw is contemplating her own sad fate from the hereafter. "The wrecking ball has already struck. This is just the moment before it all falls down." July's gift is not so much for imagery as for rhythm, for the mild joke stretched into a metaphysical statement, for the sotto voce of childish narcissists suddenly shorn of their hipster armor and alone with "the darkness it is inappropriate to talk about." Half epiphany and half irritant, The Future is about the braided need for and dread of losing control that bridges screwball comedies and horror movies, and at its best it suggests Albert Brooks' Lost in America re-imagined by the Julie Haggerty character. How much further July can push her blend of whimsy and pain remains to be seen, but this is arguably the strangest study of artistic and parental anxiety since Eraserhead.