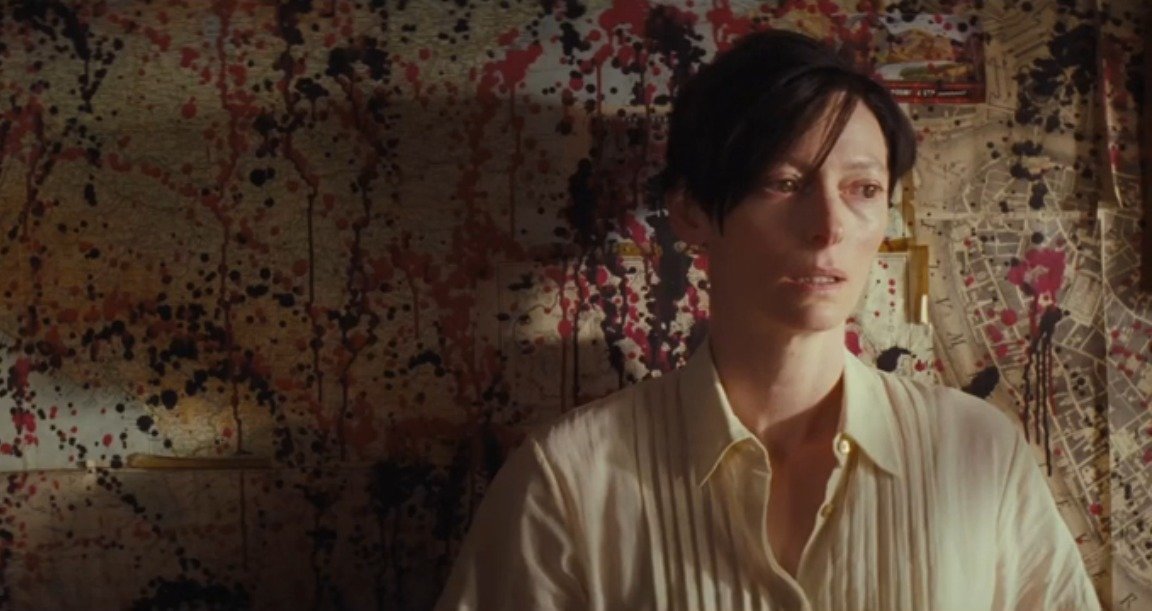 Death in Lynne Ramsay’s earlier films was a manifestation of their characters’ milieu, a pungent scent: Think of the drowning lad going unnoticed in Ratcatcher’s garbage-strewn Glasgow, or Morvern Callar’s blur of desert and discotheque, where air-freshener is used to mask the presence of a corpse. In We Need to Talk About Kevin, Ramsay’s third and worst feature, death is a striptease, a tragedy that, revealed bit by bit by the director’s temporal fragmentation, is reduced to coyly obfuscated spectacle. In the first of many visual-aural shocks meant to mingle past and present and keep the nerves frayed, the film cuts from blinding white light and accelerating lawn-sprinkler noises to an overhead view of tomato sauce-covered carousers, a human beehive that introduces both the protagonist (Tilda Swinton) and the recurring motif of splattered reds (paint, soup, jelly, blood). What follow aren’t so much scenes as splinters of scenes, synecdoches of Romance (an embrace in the rain), Pregnancy (sideways views of a prenatal class) and Childbirth (a screaming face disfigured by medical glass). For a while, the hyper-thick textures work effectively in visualizing the disorientated mindset of a stranded world-traveler played by the least domestic of actresses, who finds herself married to John C. Reilly and stuck in suburban Connecticut with a kid who looks like he came out of her womb already giving the Kubrick Stare, looming forehead and all.

The kid is Kevin, of course, who goes from shrieking baby to destructive toddler to zombified teen killer. The symbiosis between anxious mother and psychotic son—is she absorbing his growing malevolence out of guilt or responsibility, or is she projecting her own bad vibes onto him?—is what gives the film its shape, the sense of a deforming bulge resulting from turmoil swept under the maternal rug. But Ramsay doesn’t let the horror arise from the material; instead, she pulverizes it with a cacophony of clashing sound bridges, crudely symbolic colors and overwrought edits. Like Steve McQueen’s Manhattan in Shame, Ramsay’s Connecticut is a netherworld of vacant signifiers (Home, Office, Hell) where blunt abstraction and blunt literalism wrestle for control. Also like Shame, it’s a vision too self-infatuated to realize how close it is to dark comedy—a sardonic filmmaker (say, the Polanski who located the absurd in the satanic eyes staring out of the cradle in Rosemary’s Baby) would have seen the scabrous humor as well as the dismay in the shot of Swinton letting out a tiny sigh after parking her baby carriage next to a deafening power drill. A mishmash of soiled diapers, leaden musical cues and underlined soul-sickness, We Need to Talk About Kevin concludes on a limp retread of Benny’s Video-era Haneke, with teenage Kevin (Ezra Miller) staring like a carbon copy of Arno Frisch. It’s supposed to shock into catharsis; it instead plays like the merciful final rattle of a relentless anxiety machine.