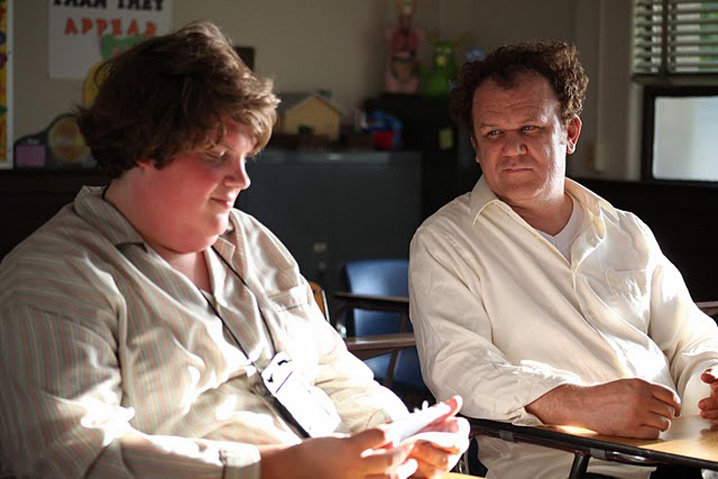 Azazel Jacobs has an acute eye for houses that, without ever crumbling the low-key naturalism of his narratives, can mutate from mere settings to mysterious visualizations of the characters’ often bemused emotional states. The old Manhattan loft in Momma’s Man is by turns a found-object mausoleum, a womb, and a cavernous penitentiary, its bric-a-brac simultaneously cocooning and stifling the stranded protagonist. Terri has some of that densely expressive clutter in the cramped Californian cabin the eponymous teen loner (Jacob Wysocki) shares with his ailing uncle (Creed Bratton), a jumble of bookshelves, bulky TV sets and wooded passageways that give tangible shape to the younger man’s withdrawn nature as well as to the older man’s addled melancholy. (In the attic directly above Terri’s bed, mousetraps snap in the middle of the night like tiny twitches in a softly anxious psyche.) But where the outside world in Momma’s Man was composed of overcast skies and train loops, Jacobs’ unexpectedly pastoral new film ventures along with the protagonist through sun-dappled forests and into brightly lit offices, accumulating details from people, places and objects with the same unostentatious watchfulness. At the local high school, Terri coolly withstands the taunting of peer and teacher alike, uneasily befriends a fellow outcast (Bridger Zadina) who’s as spindly and angry as he’s ample and placid, and improvises a bit of gallant clowning to save the class-beauty-turned-crushed-pariah (Olivia Crocicchia) from expulsion. (She passes him a note: “You’re funny.” “But you didn’t laugh,” he writes back.) Like Nicholas Ray misfits, the trio’s paths converge in the waiting room of an authority figure, here an expansive assistant principal who, as played by John C. Reilly, is not only a generous portrayal of sincerity and disquiet behind inspirational afterschool bromides, but also a pertinent link to the Judd Apatow brand of arrested-adolescence slapstick Jacobs scrupulously sidesteps. Building to an exceptionally mercurial pas de trois of giddiness and discomfort, Terri examines the freakery and geekery of puberty not with Miguel Arteta’s clamminess but with the serene, compassionate excruciation that’s become Jacobs’ distinctive timbre.