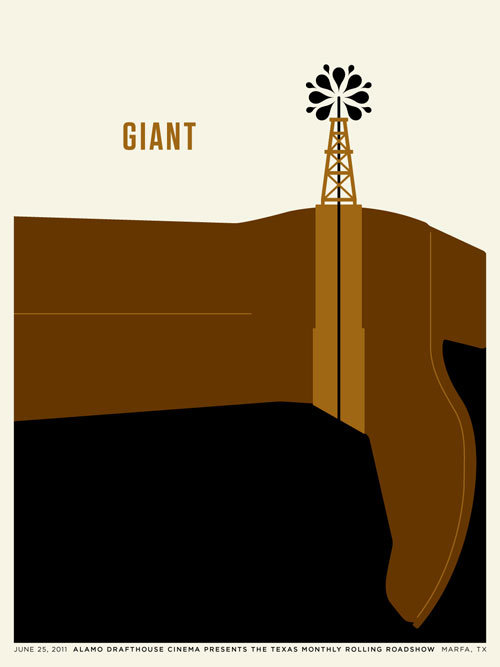 For this year’s incarnation of the Alamo Drafthouse Rolling Roadshow, someone had the excellent idea of commissioning the artist formerly known as The Small Stakes to design a series of posters for their Texas Monthly series, in which films will be screened in the Texas towns in which they were made or set. I first wrote about The Small Stakes, who now prefers to go by his real name, Jason Munn, a couple of years ago. Jason is one of the best gig poster designers around (Chronicle recently published a beautiful book of his collected work) and I had bemoaned the fact that he didn’t do more movie posters. So the Alamo Drafthouse set things to right. Jason’s work is indelibly clean, spare, witty and beautifully executed. In his gig posters he tends to use a lot of repeated objects—waves, paintbrushes, arrows, cats, birds, guitars, records—in increasingly clever and delightful ways (witness his posters for Best Coast and Mogwai at the bottom of this page). His use of line and negative space and the transmogrification of symbols is constantly surprising. In his poster for Giant, a cowboy boot and an oil well stand in nicely for George Stevens’ film, but it is the way that that lovely oil burst design turns into a boot spur, or vice versa, that elevates the design above your average fan poster.

Last year I wrote about Olly Moss’s series of Saul Bass-inspired designs for the Rolling Roadshow, which started me on a discussion of fan posters, and what I called “the synecdochally minimalist” which takes “an element from the film to stand in for the whole (a shower drain for Psycho, a pair of y-fronts for Boogie Nights).” Jason sometimes does the same thing, but often uses that image as a starting point and turns it into something else, as with the boot spur in Giant, and as with the coin toss from No Country for Old Men turning into a bloody question mark. The poster for Blood Simple is just that, brilliantly simple: the receding parallel lines of a ploughed field, a man with a shovel on the horizon, the hint of a shallow grave and that runnel of blood. I love how tiny figures on the horizon appear again in The Searchers (though my favorite tiny figure is that man trudging through the snow in the Mogwai poster), and the fact that the horizon lines on those two posters match perfectly (nice for framing side by side). And then there are the paired gun-themed designs of Bonnie and Clyde—in which the trajectory of deadly bullets over the curve of car tracks forms a dollar sign—and Red River—in which the smoke from two revolvers becomes not only the bend of a river, but also, as Jason pointed out to me, “the shape of the brand that is put on their cattle.”

You can see more of Jason’s work, and also purchase some of it, on his website. 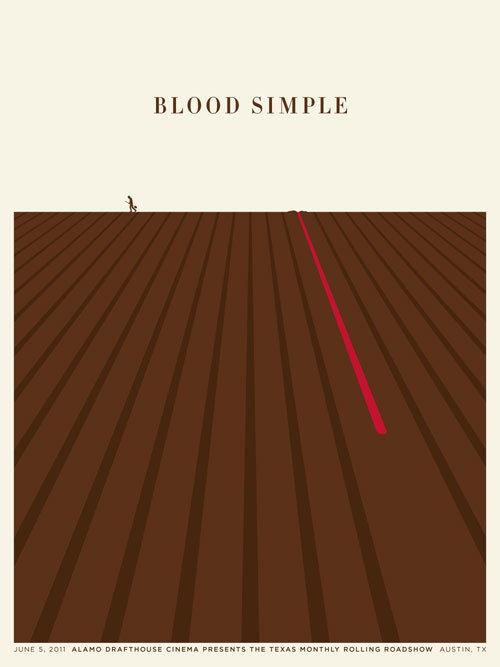 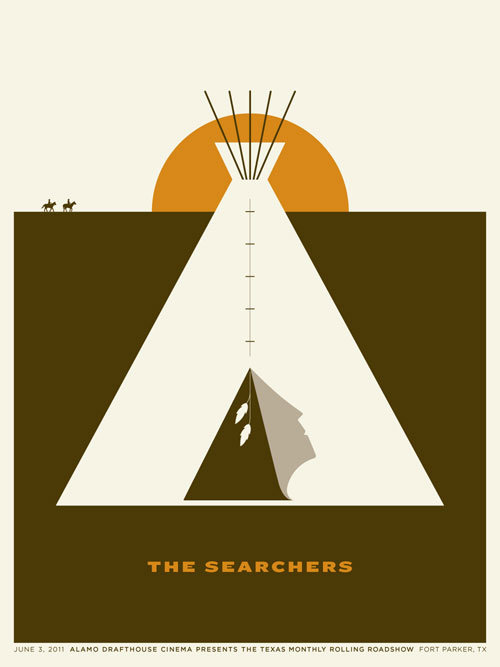 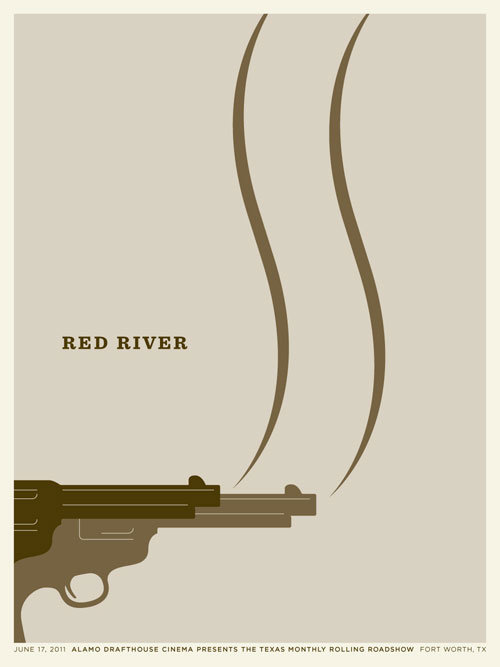 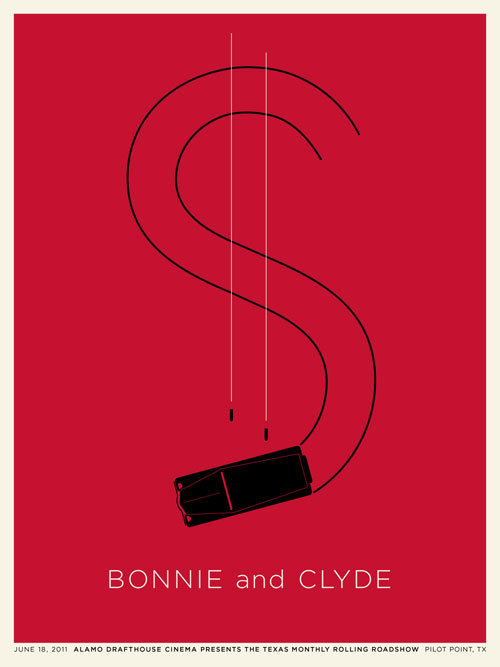 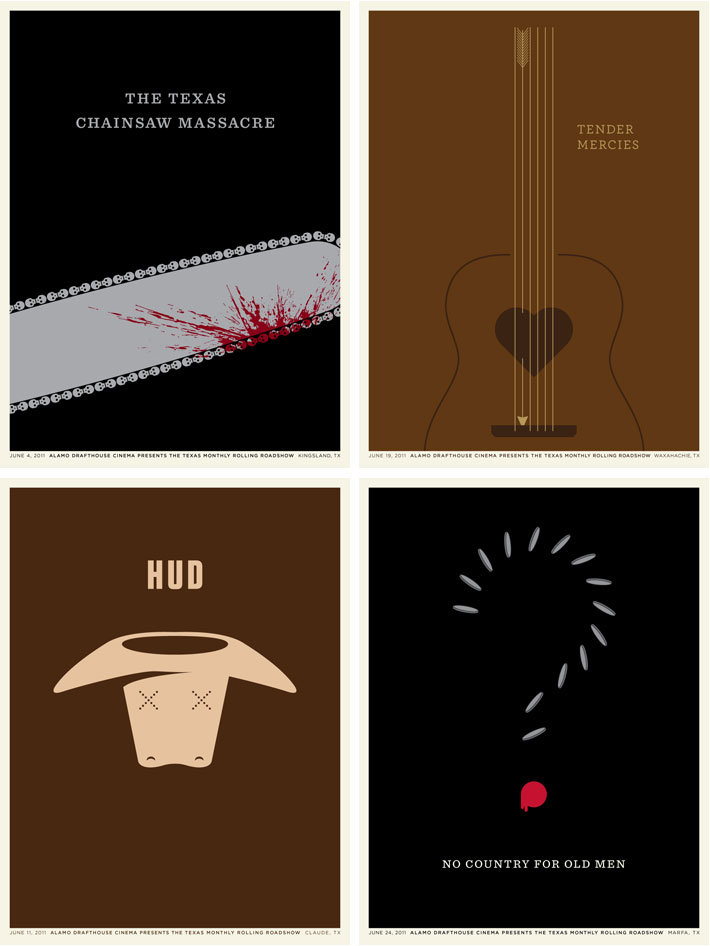 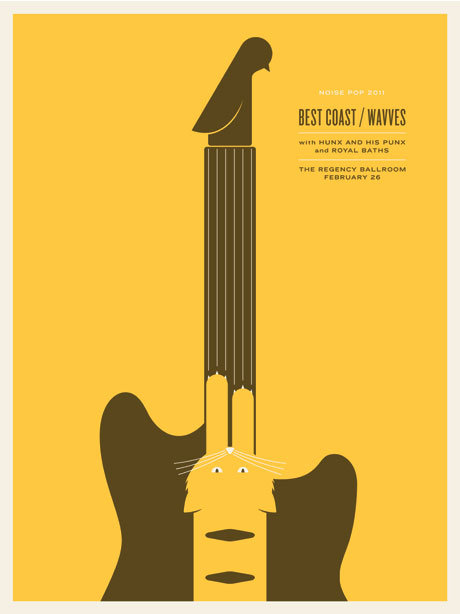 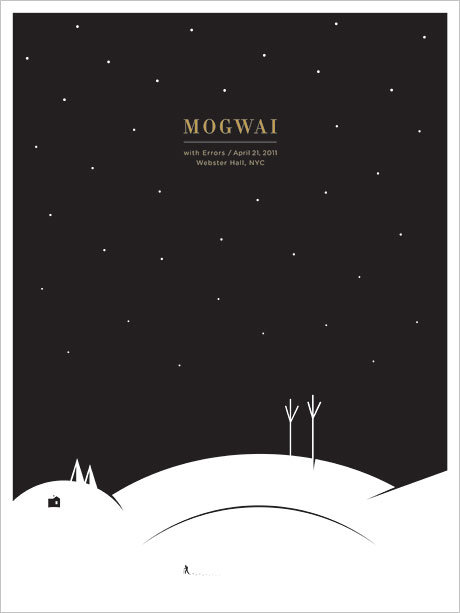