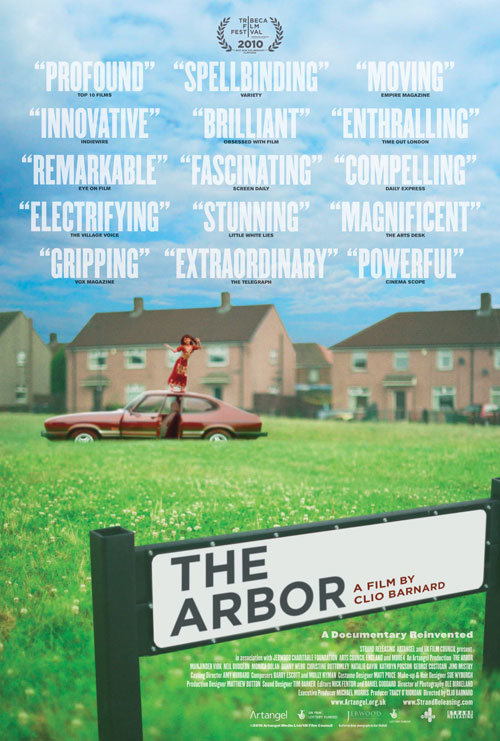 When I first saw Clio Barnard’s The Arbor a year ago at the Tribeca Film Festival I thought it was hands down the best film there, if not one of the best films I saw all year, but also an incredible challenge from a marketing point of view. How do you sell an experimental biopic of an obscure British playwright—or more exactly of the obscure British playwright’s daughter—a film mired in racism and drug abuse on a forlorn English council estate, let alone encapsulate it in a poster? Strand Releasing’s one-sheet, which I like a lot, does a good job of drawing your attention. Though I tend to dislike posters with too many press quotes, The Arbor needs them. Though the poster is intriguing, what does it exactly tell you? That the film is set in a British working class area (if you recognise the street sign as particularly British and the houses as particularly working class); that there is a South Asian element to the film (though it might not be particularly clear, especially not at smaller sizes, that that is a girl in a sari dancing on top of the car); and that it is “a documentary reinvented” as the small tagline declares. But tell people also that the film is profound, spellbinding, moving, innovative, brilliant, enthralling, remarkable and so on, and that, coupled with the mystery of its image, should be enough to make you want to see it.

Andrea Dunbar was a British playwright who grew up on a rough Bradford housing estate in Northern England. She wrote her first play, the autobiographical The Arbor, in 1977 at the age of 15, as a school assignment which ended up being performed three years later at the Royal Court Theatre in London (and later at the Young Playwright’s Festival  in New York). Dunbar is best known for Rita, Sue and Bob Too, her follow-up play which was performed in 1982 and filmed by the great Alan Clarke in 1986 (one of his few non-TV films and by far his most light-hearted).

The Arbor is named after Brafferton Arbor, the street on the notorious Buttershaw housing project that Dunbar grew up on, and there is a lovely, sad disconnect between the name (“a shady resting place in a garden or park, often made of rustic work or latticework on which plants, such as climbing shrubs or vines, are grown”) and the grim reality of its setting, which the poster conveys in its lawn of daisies leading to the housing line. All of Dunbar’s work is set on the estate, where she continued to live, despite her success. A single mother with three children by three different men, Dunbar was a heavy drinker who died tragically young in 1990 from a brain haemmorrhage at the age of 29.

The Arbor (the film) explores Dunbar’s life and that of her children using an extraordinary technique known as “verbatim theater.” Barnard interviewed Dunbar’s family and friends and then had actors lip-sync their words (which they do seamlessly). Though this might seem a little arbitrary (at first you’d rather see the real people) and even precious, the result is actually incredibly powerful: the actors fix the camera in the way that the speakers would not, resulting in something similar to the effect Errol Morris strives for with his “interrotron” camera. It also allows for far more cinematic staging (the cinematography is gorgeous). Barnard intercuts these reminiscences with actors performing scenes from Dunbar's plays in the middle of the Buttershaw estate, and with scenes of Dunbar herself on a BBC documentary from 1980.

The main focus of the film, however, soon becomes Lorraine, Dunbar's eldest daughter, who, born to a Pakistani father, and neglected by her mother (who died when she was 10), suffers racism as a child (the Buttershaw estate being almost entirely white despite Bradford’s large Pakistani population) and whose life is a heartbreaking downward spiral. The scene of Lorraine as a young girl dancing on top of a car in her sari does appear in the film, but in a different setting. It is a rare moment of grace and purity in the film, and I love that it was used for the poster. Its odd soft-focus look reminds me of the amazing blurred toy photographs of David Levinthal. 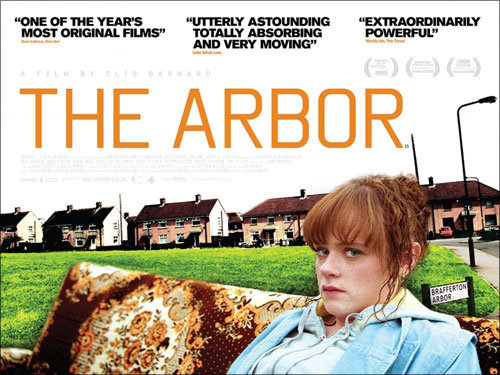 The UK poster for The Arbor (above) features one of the actors who perform scenes from Dunbar’s plays on a sofa in the middle of the estate, looking like your typical sullen British teenager, but it is not as alluring as Strand’s poster (designed by their in-house team and Steve Siers). But I'll leave you with some garish and oh-so ’80s posters from Dunbar and Clarke's bawdy Rita, Sue and Bob Too, a film which is sadly not on DVD here, but which Film Forum is reviving for four screenings in conjunction with The Arbor, which opens next Wednesday. Both are essential viewing.

Watch the trailer for The Arbor here, and the opening scene (and terrific theme song) for Rita, Sue and Bob Too here. 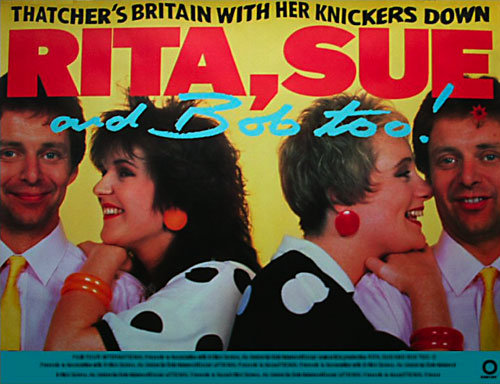