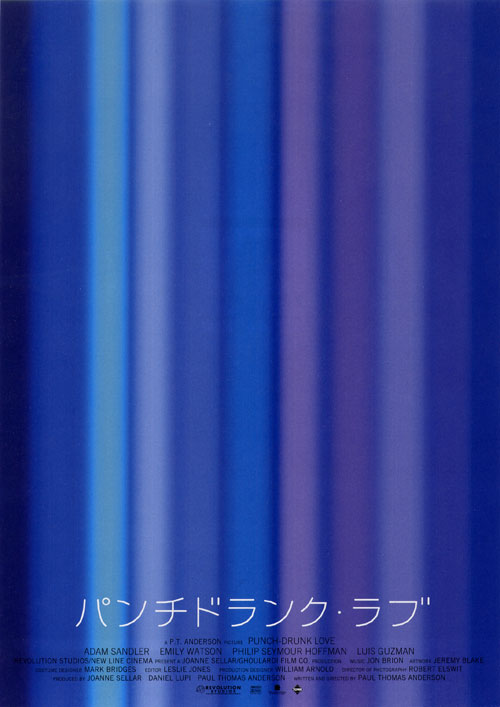 The only thing I would really wish different about this gorgeous abstract Japanese poster for Paul Thomas Anderson’s 2002 Punch-Drunk Love is that it were bigger. It is in fact a chirashi. Chirashi (the word is derived from the verb “chirasu”—to scatter, disperse) are small (7" x 10") promotional handbills that are distributed in Japanese movie theaters. Highly collectible among Japanese cinephiles, they are usually full color mini versions of the official release poster, with monochrome photos and text on the reverse, though the small format allows occasionally for affordable variations on the theatrical poster design. There is a terrific selection of chirashi collected, and available for purchase, here.

For Punch-Drunk Love, Toho-Towa, the Japanese distributor, produced a series of nine designs based on the lush colorfield “motion paintings” by Jeremy Blake that punctuate the film and add to its hallucinatory quality (see here). Blake was a rising star in the Los Angeles art world and a pioneer in digital painting when Paul Thomas Anderson commissioned the work (the same year that Blake also created the four covers for Beck’s Sea Change album). But, as reported a couple of years ago in New York Magazine and Vanity Fair, a series of personal set-backs, culminating in the 2007 suicide of his partner and fellow artist Theresa Duncan, led to the 35-year-old Blake taking his own life by walking into the sea at Rockaway Beach.

It was rumored that Bret Easton Ellis was writing a script about the tragic couple’s life, with Gus Van Sant attached in some capacity, but that remains to be seen. Van Sant’s upcoming film Restless, a film reported to be about “two lovers with a preoccupation with mortality” but based on a play by Jason Lew, is probably coincidental.

Meanwhile, if anyone ever sees full poster size versions of any of the Blake designs, please let me know.