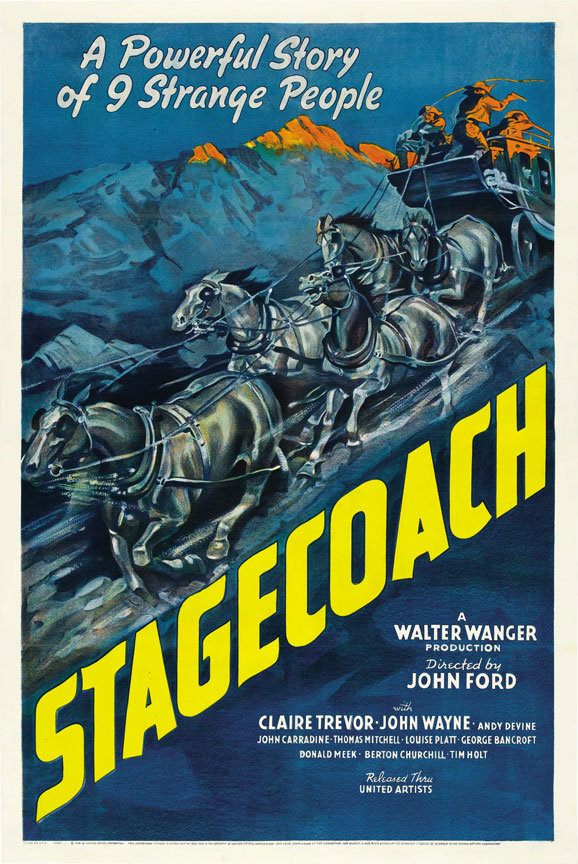 Until it came up for sale at Heritage Auctions the other day I had never seen this glorious poster for John Ford’s Stagecoach﻿. (It is only the second time that Heritage has ever handled a copy of this one-sheet, and the last one sold for over $77,000 five years ago.) A truly gorgeous piece of art, full of dynamism—horses at full gallop, gunmen firing out of the frame, that bright yellow title bissecting the image—and natural beauty—the blue light of evening, the last rays of sun hitting the mountain peaks and the top of the stagecoach—it is really quite unlike most posters of the era. What distinguishes it is perhaps what makes it less familiar: a lack of stars. Though it is remembered now as one of the great John Wayne films, Wayne was not a star at the time, in fact Ford’s insistence on using his good friend as the lead got the film turned down at most major studios, and even independent producer Walter Wanger, who eventually put up half the money, wanted Gary Cooper in the role. So this, the first poster for the film as far as I know, features neither Wayne nor Claire Trevor (a bigger star at the time), nor any of the actors in what was really a character-driven film.

A few years ago Heritage did also sell a very rare item, an original printer’s proof for this poster. As their site explains, “during the production process of a poster, a printer will take several proofs of colors to make sure they are correct before running large numbers of full color posters. Proofs were not meant to be kept and therefore were small runs, usually printed on discarded paper. The extremely rare proof offered here was printed from a lithography stone and is the first blue color, which would make up the majority of the coloring for the final print, as the poster depicts a night scene.﻿” There is also an Argentinian version of the poster using the same artwork but with somewhat different coloring. 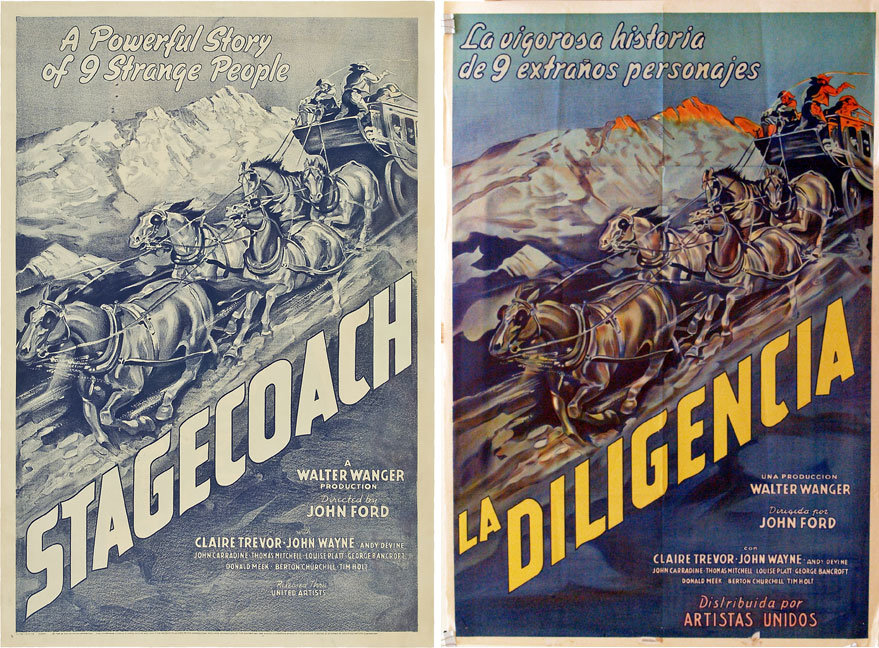 The three half-sheet posters below are more of what we expect when we think of Stagecoach as a film of nine character actors in search of a plot (of land), but I’m impressed that United Artists stuck with the same title treatment for all their publicity: unusual hand lettering—simple but with its own curved almost-serif idiosyncracies—that avoids the obvious cliché of western woodprint type (unlike, I hate to say it, the Criterion cover which I still rather like for its simplicity). 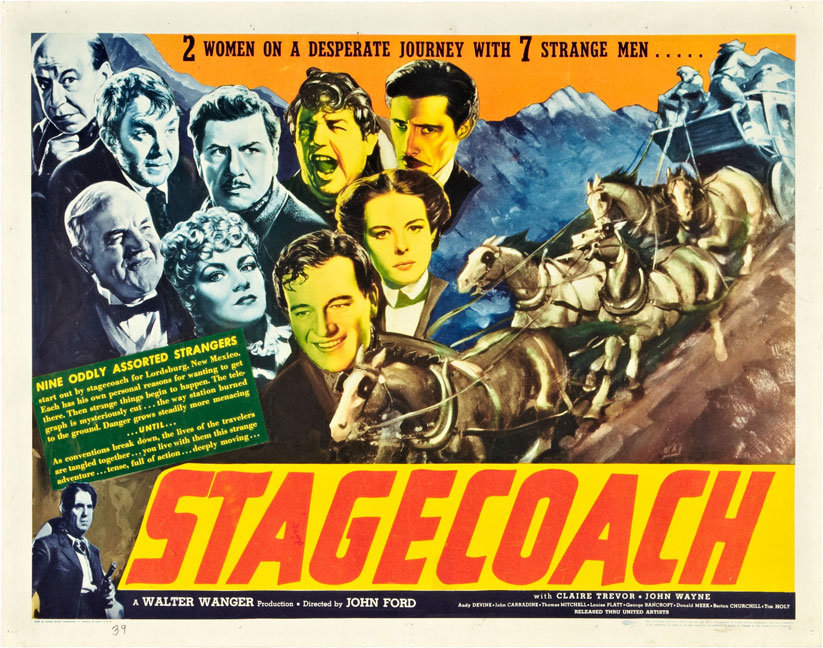 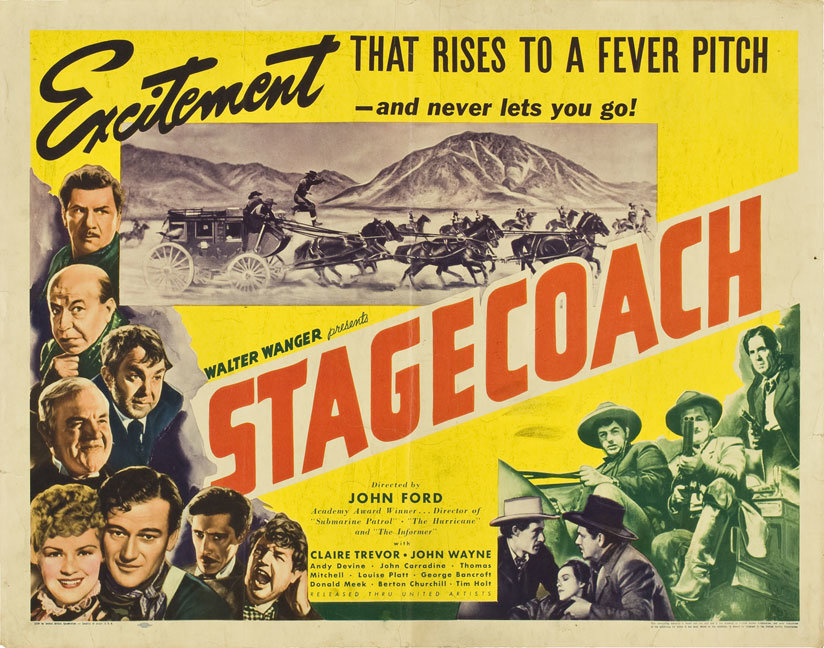 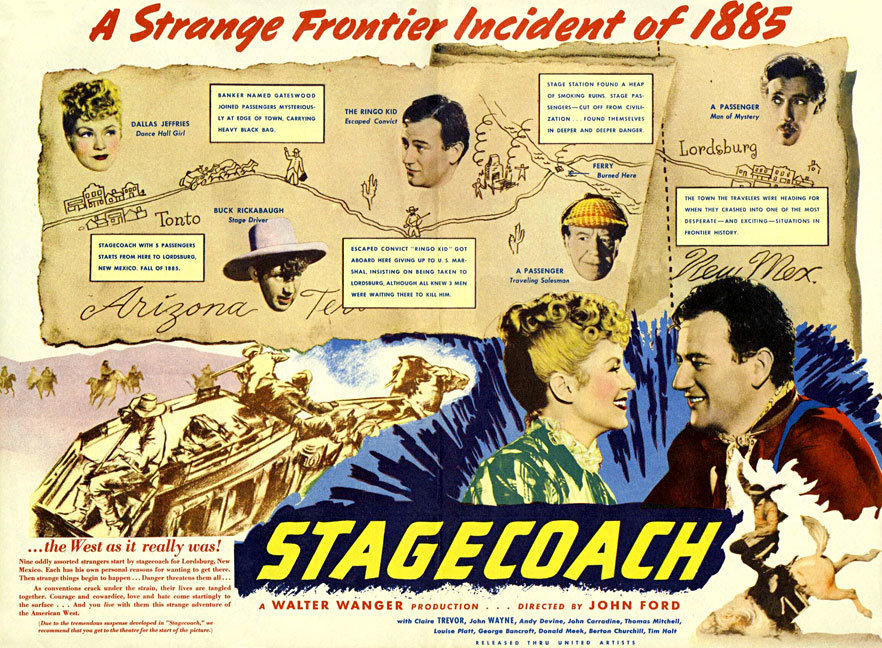 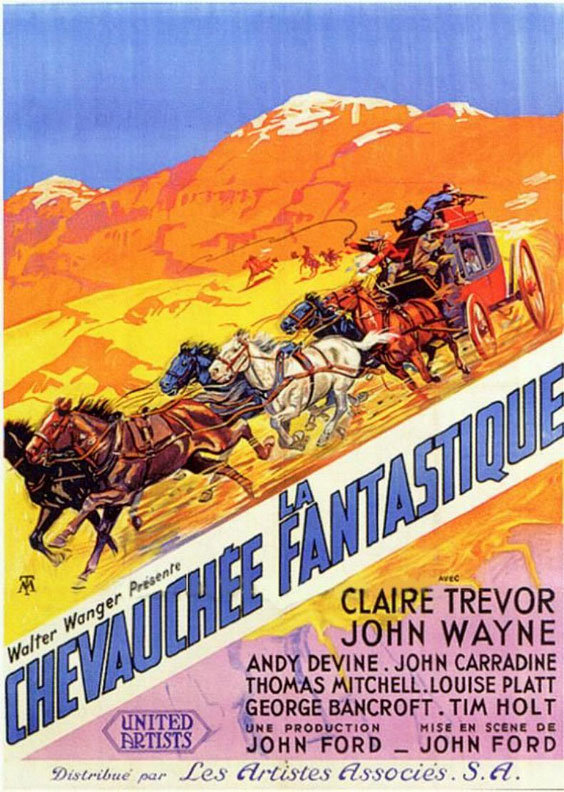 ...but there is another French poster, probably for a later re-release, that plays up the stars and the romance quite beautifully... 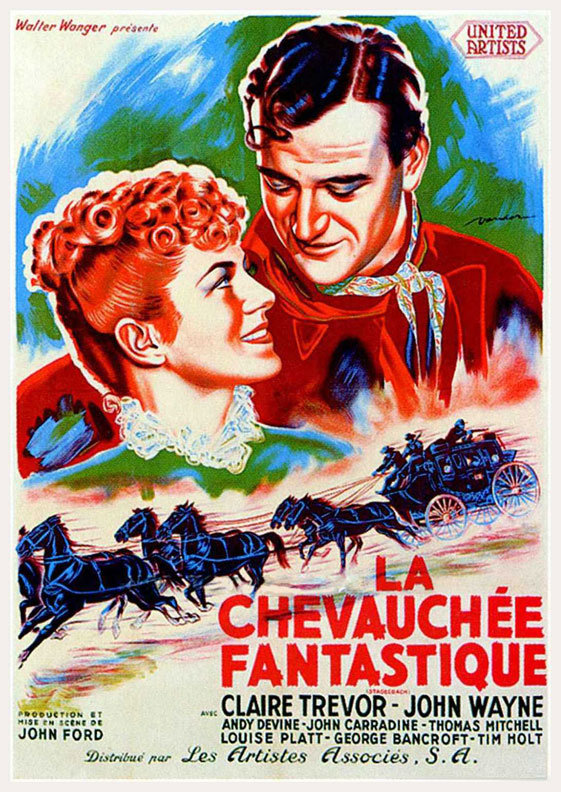 Much as I love the American poster, however, the greatest artwork for Stagecoach may be that by the great Italian master Anselmo Ballester, who seems to have painted not one but three designs for the film for a 1960 Italian re-release. Unlike the American and French artists, Ballester plays up the Apache element, and, perhaps unsurprisingly for one of the all-time great colorists, takes the idea of the “Red” Indian to literal extremes. 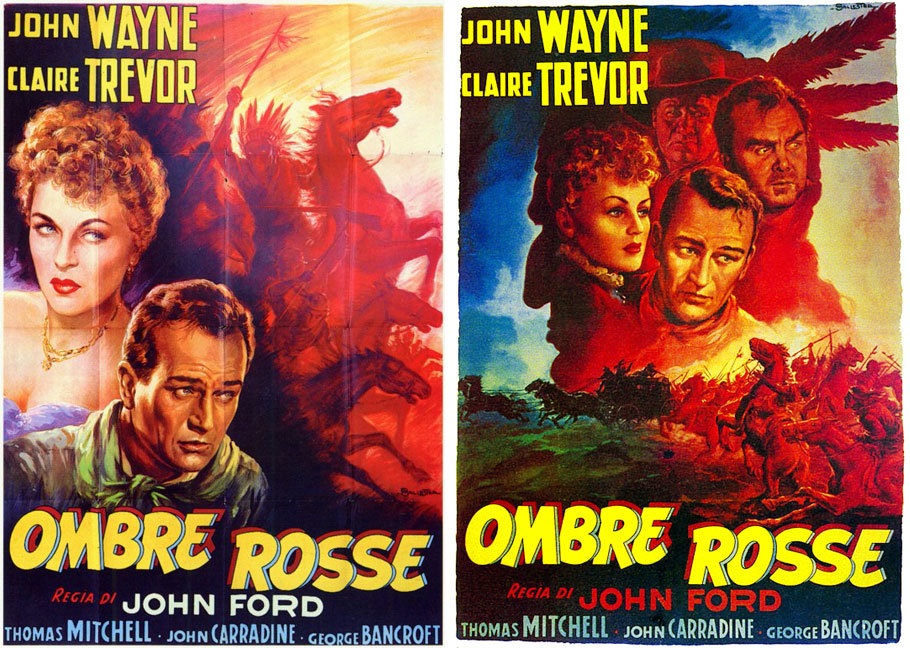 The locandina (window poster) below, despite the unfortunate insert of Wayne’s face, gives us the best look at Ballester’s artistry, with the Apache warriors surrounding the stagecoach like giant avenging angels and the horses rearing up in panic.

By contrast, this other Italian poster (signed by someone named Rin or Rino?) looks almost serene, despite the Apache onslaught in the background﻿. 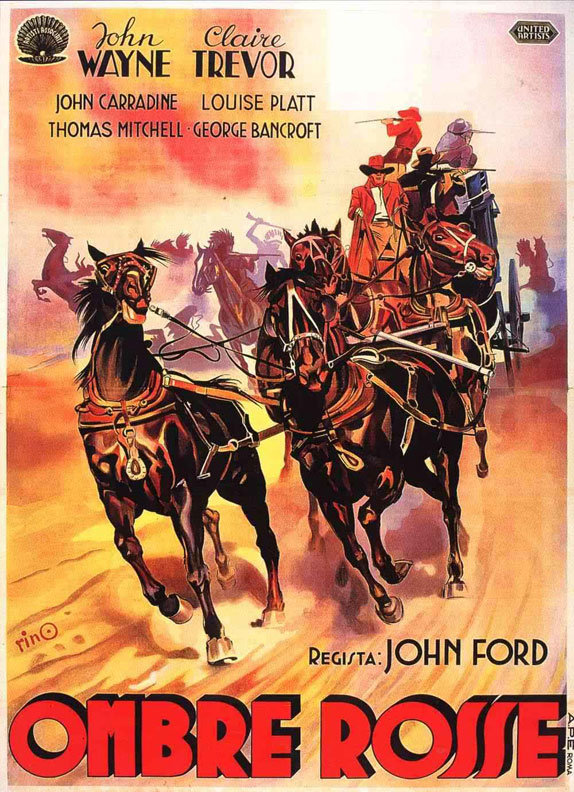 It isn’t until later re-release posters (and Stagecoach seems to have been re-released many times) that another emerging star of Stagecoach starts to be featured, and that’s Monument Valley. The famous buttes of the Valley are now as indelibly associated with Ford as Wayne himself, so it’s surprising now not to see them featured in the original advertising. But by the time of these Spanish and Japanese re-releases in the 60s and 70s that had obviously changed. 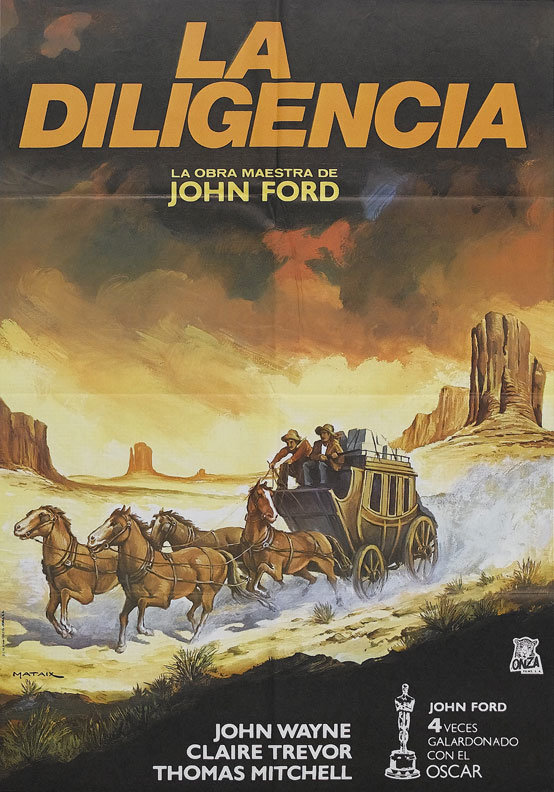 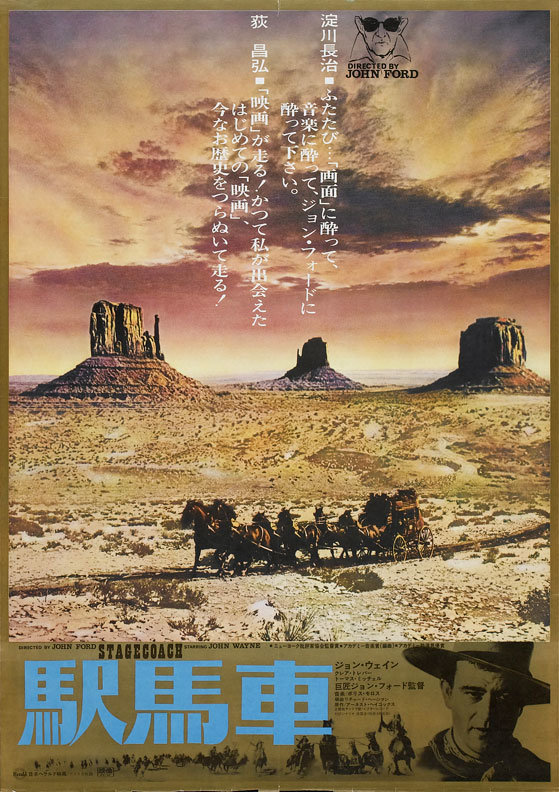 (I love the little drawing of John Ford at the top of the Japanese poster.)

﻿There are many, many other posters for Stagecoach, many of them quite ordinary. But let me leave you with two more striking designs that are quite unlike any of the others. First, a 1963 German poster by Dorothea Nobisch-Fischer... 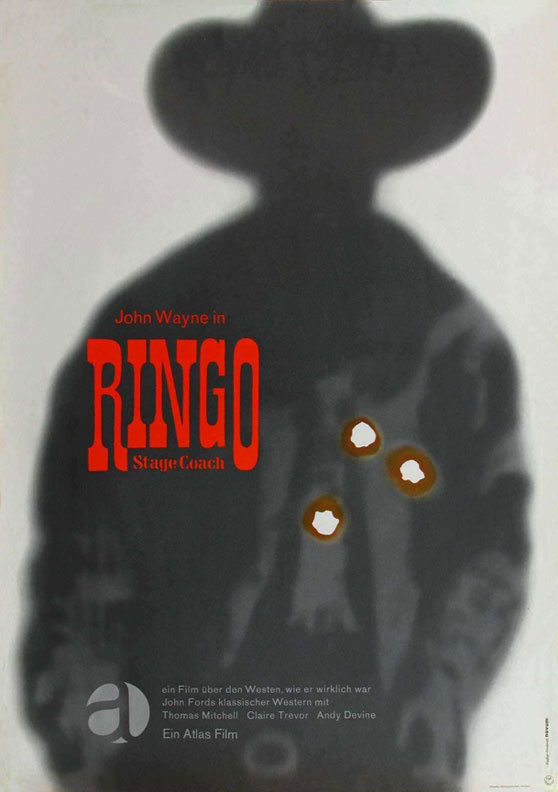 (I’m not sure when the film became known as “Ringo” in Germany, since an earlier German poster has the title as “Höllenfahrt nach Santa Fe.”)﻿

And a charming Polish design from 1961 by Jerzy Treutler... 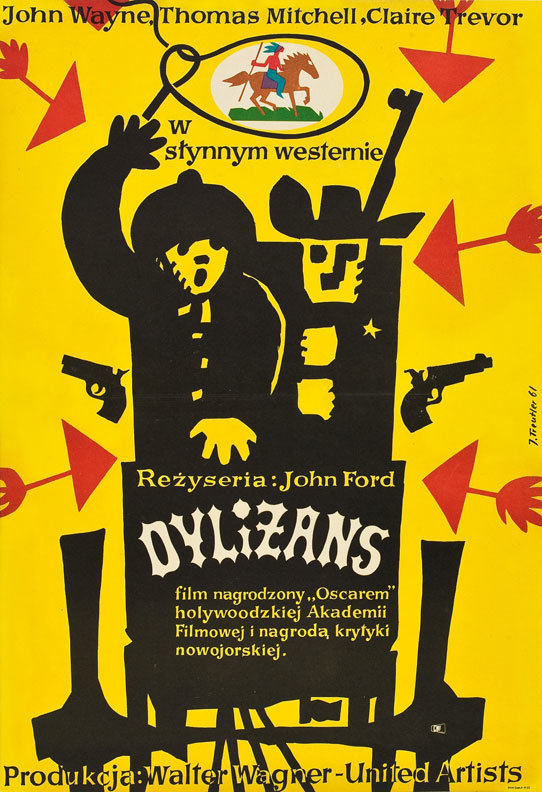 Just a reminder that two events that I have written about recently take place this weekend: the auction of the Berwick Discovery posters in Dallas, and the first of four screenings of the complete restored Napoleon in San Francisco.

An article on contemporary Hollywood poster design practices by someone who spent two years in the trenches, Alex Griendling.

An interview about movie poster collecting on BleedingCool.com

And some rather inspired, and superbly executed posters for films that do not exist, by Pascal Witaszek. (I especially like Walt and the Abba biopic Waterloo).