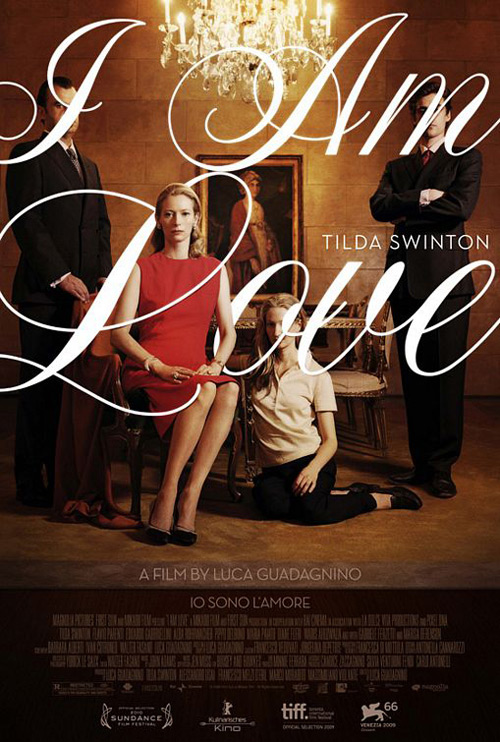 What I love about this new poster for Luca Guadagnino’s I Am Love (Io sono l'amore) is not just its gorgeous typography, but also how it celebrates its lead actress, the incomparable Tilda Swinton. In the film, which premiered at Venice and Sundance and opens in the U.S. in June, Swinton plays a Russian woman married into a rich Milanese family who embarks upon a tempestuous affair with her son’s business partner. In the UK quad poster Swinton’s co-stars (including Barry Lyndon’s Marisa Berenson) have been turned into grey statues, like characters in a Roy Andersson film, while Swinton is suitably vivid in pink. 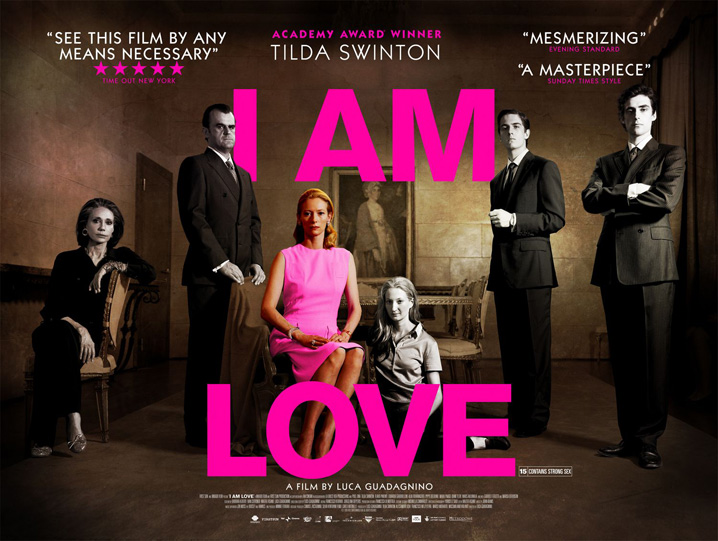 Ever since she pirouetted to the wails of Diamanda Galas, tearing furiously at her wedding dress and running with scissors, in Derek Jarman’s masterpiece The Last of England (1988), Swinton has been a constantly arresting presence in film. Furiously intelligent and a restlessly curious human being, Swinton has transformed from Princess Diana’s classmate to Cambridge graduate to avant-garde muse to Oscar winner. Whether cycling around Berlin or pulling a mobile cinema around Scotland, it’s as if she has never stood still (except of course for that one week in 1995 when she lay on display to the public in a glass box in London’s Serpentine Gallery).

Trained in theater, Swinton turned her back on a promising career in the Royal Shakespeare Company and made her film debut in Jarman’s Caravaggio in 1986. She became Jarman’s muse and closest friend, making eight films with him in as many years. Her breakout starring role was in Sally Potter’s Orlando (1992), but for a while, after Jarman’s death in 1994, she remained a closely guarded secret, acting in little-seen experimental features like Susan Streitfeld’s Female Perversions (1996), Lynn Hershman-Leeson’s Conceiving Ada (1997) and John Maybury's Love is the Devil (1998).

In the 00s, no doubt encouraged by the agent she thanked at the Oscars, she started to pop up in small roles in more mainstream films (mainstream at least by Tilda’s standards) like The Beach (2000), Vanilla Sky (2001), Adaptation (2002) and Constantine (2005), but her most high profile Hollywood role by far, and a superb bit of casting, was as the White Witch in The Chronicles of Narnia (2005). Attracted, as always, by directors of vision she also appeared, albeit briefly, in recent films by Bela Tarr, the Coen brothers, David Fincher, and Jim Jarmusch. And in 2008 she won her best supporting Oscar playing a high-strung corporate villain in Michael Clayton. But, with the exception of the Ophüls remake The Deep End in 2001, starring roles seemed to elude her, as if most casting directors don’t really know what to do with her.

And then came Erick Zonca’s Julia, a film which finally gave Tilda the chance to let rip for 144 minutes. Inevitably ignored by this year’s Oscars, though it was by far the most fearless performance of the year, Julia was a feast for Tilda fans. As Manohla Dargis wrote in The New York Times, “There are few film actresses working today who can embrace the extremes of beauty and ugliness as persuasively as Tilda Swinton, and fewer still, I suspect, who have the guts to try. She’s a magnificent, bold, sometimes viscerally uncomfortable screen presence, with an otherworldly alabaster glow and a piercing gaze that seems to nail you to your seat. (She’s one of the few performers who justifies that overworked critical superlative, riveting.)”

With I Am Love and, if it ever gets off the ground, Lynn Ramsay’s upcoming We Need to Talk About Kevin, more powerhouse starring roles from Swinton are in our future. Meanwhile Auteurs readers can see her in The Invisible Frame, a collaborative project with Cynthia Beatt and composer Simon Fisher Turner and a follow-up to their 1988 Cycling the Frame in which Swinton cycled around the Berlin Wall.

For me, one of the highlights of Conan O’Brien’s final Tonight Show was Conan suggesting that when they make a TV movie about the whole NBC talk show debacle he wants fellow gangly red-head Tilda to play him. Proof, more than her Oscar, that Tilda had arrived in at least a tributary of the mainstream. Though, as if to remind us of her avant-garde roots, she spent part of last summer pulling a travelling cinema across Scotland in a kilt for her second Ballerina Ballroom Cinema of Dreams film festival.

Below is a guided tour of Tilda’s career in movie posters. Despite her striking beauty she hasn’t been particularly well served by poster designers (fashion designers, on the other hand, have a field day with her), which makes the I Am Love posters all the more notable. Do make sure to scroll all the way down though for the superb poster for the Beijing installment of her film festival: The Scottish Cinema of Dreams in China. Pure Tilda. 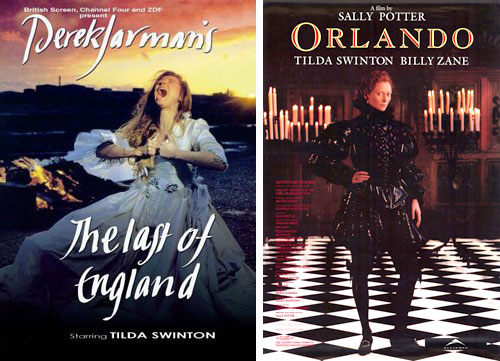 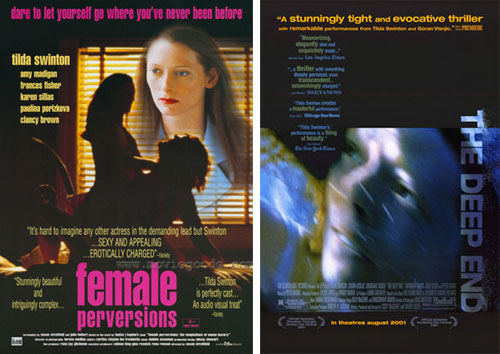 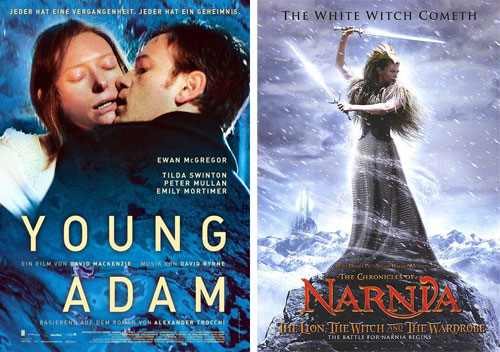 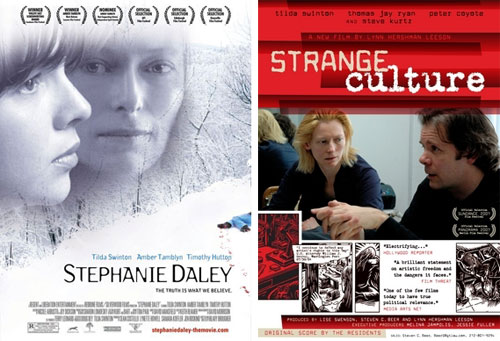 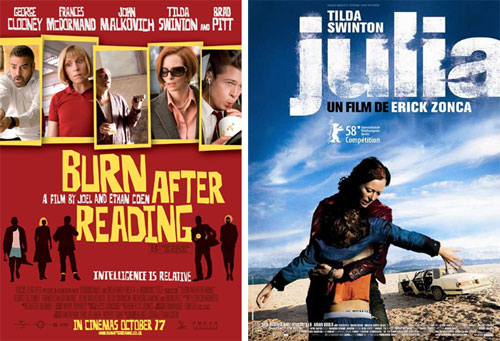 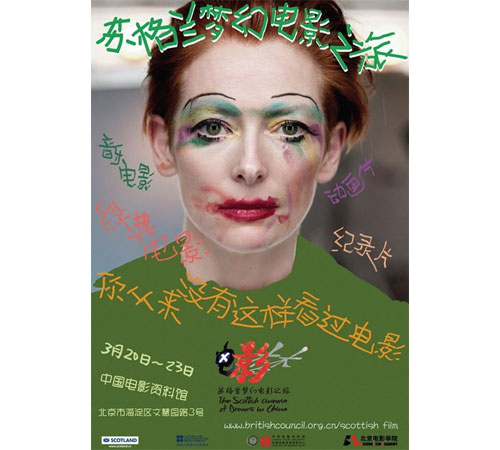