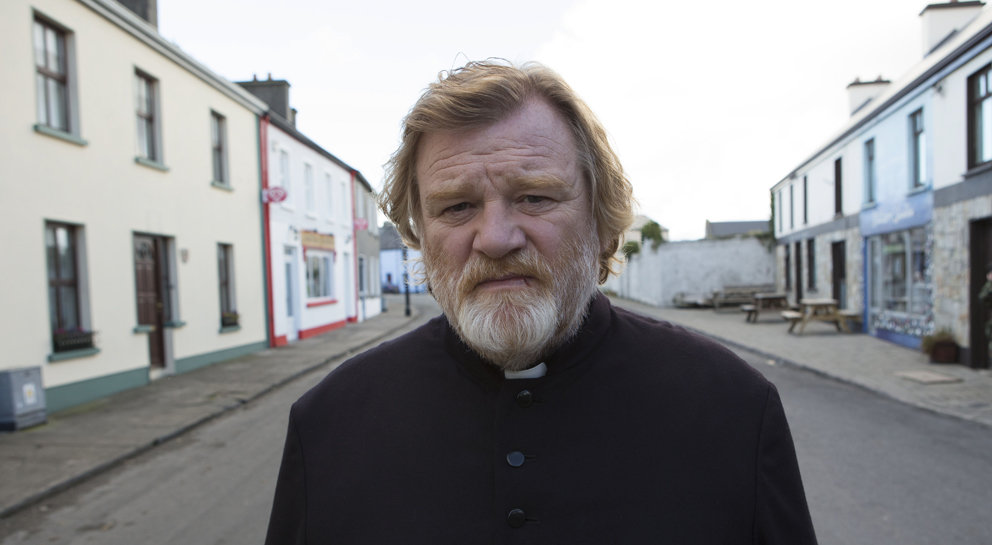 In the opening scene of John Michael McDonagh’s Calvary, Irish priest Father James (Brendan Gleeson) is visited in his confession box by an unseen man and told that he will be killed in 7 days’ time. This sounds like the set-up of a quintessentially British variety of small town whodunit, but the film soon reveals itself to be less interested in unravelling the mystery than in exploring the effects that the financialization of the capitalist economy and the decline of Catholic authority have had on modern Ireland, using one deeply fractured coastal village as a microcosm. James, as it turns out, is a diehard traditionalist, critical of the perceived rootlessness of contemporary society and still clinging on to old fashioned ideas about the values of community spirit and localised space. The bulk of the narrative is concerned with a series of interactions James engages in over the following week with the caricatured-to-various-degrees village inhabitants, most of which principally serve to further drum in James’ already deep-set feelings of obsolesce. Throughout, James contemplates whether or not to turn his tormentor (whose voice he has recognised) in to the authorities, an act that will require him to sacrifice both his vow of silence and his fatalist conviction. The pressure to do so mounts when he begins to be plagued by a string of cruel pranks perpetrated by whom he assumes to be the same guy. McDonagh’s script isn’t particularly subtle. The structure recalls Haneke and the Coens: a pointedly non-cathartic tale of a man whose defining trait is passivity struggling to get by in a world that’s inexplicably turning against him.

Pretty much everyone treats James with either polite indifference or outright hostility. Though a large number of them still attend Sunday mass, they’re open about the fact that they pay his teachings no thought when it comes to the business of day-to-day life. Among the supporting characters/banes of James’ existence are: an atheistic doctor who has been so emotionally fraught by the unjust physical suffering he’s witnessed that he’s actually offended by James’ fatalism; tourists who view James as either a nifty novelty or a potential threat; and a young man who’s thinking of joining the army but has paid no thought to the moral and ideological implications of such a decision, he just sees it as a trade like any other. A young fellow priest who devotes his attention to the petty practicalities of the position provides a foreboding image of what could possibly be the Church’s future.

If James has a full-blown rival, it’s Fitzgerald (Dylan Moran), an absurdly rich banker and the human embodiment of corporate capitalist forward progress. He’s a proudly unreflective, self-aggrandizing narcissist, and views everything around him as a commodity whose only worth lies in the instrumental value it possesses. He explicitly treats his redemption as a business transaction, admitting that he has no interest in changing his ways or thinking about the effects that his financial crimes have had on others, but offering to donate a large amount of money to the Church in exchange for absolution, simply because he thinks that such an outward gesture will give him the satisfaction of feeling that he’s done something to clear his conscience. Although he tries to affect remorse, all he betrays is a sense of self-satisfaction as he recalls the severity of the wrongdoings he’s managed to get away with.

While the rest of the town still has traces of genuine cultural and geographical specificity (butcher’s shops and local pubs and unspoiled country trails), Fitzgerald’s mansion is generically sleek and stuffed with anonymous, high-end consumerist bric-a-brac. On his walls hang paintings that have been stripped of context and reduced to superficial indicators of their owner’s perceived good taste. Rather than the Church, it’s the likes of he, the goal-orientated icon of profit-for-profit’s-sake, who holds the greatest influence over a corporatized society, and he’s able to be as ugly as he pleases without fear of reprimand.

The marginalized James could have easily been turned into a solitary, decent figure trying his darndest to uphold upstanding values in the face of widespread narcissism and lethargy, but James’ distaste of modern society is largely apathetic and self-righteous, and he alienates his flock as a consequence. He sees it as his duty to reach out to those he views as spiritually estranged and lacking stability, but he’s really not so much an enlightened savant as a stubborn reactionary, faintly delusional about his significance and smugly bathing in his own pride. He usually shrinks from active involvement and falls down when it comes to adapting his lofty religious views to the struggles of his flock, for whom he provides little genuine comfort or solace. Unable to relate to their pragmatic individualism, James carries himself with an air of glum defeatism, unable to make an impact on this shifting society yet also unwilling to take any steps to rectify this. That said, he’s also one of the few people in the film who actually demonstrates a desire to go out of his or her way to help. Even though this reaching out appears to largely derive from a desire to re-affirm his own decency, in this environment, simply having the delusion of selflessness becomes a faintly heroic quality.

In fact, the attitude the film endorses isn’t that of James, but that of his daughter, Fiona (Kelly Reilly), who expresses an ambivalent attitude towards social change, lamenting the loss of the old while still wanting to adapt to the new. The two groups that surround her serve as negative examples. Her father wallows in self-pity, and the villagers have resigned to thoughtless pragmatism.  While everyone else doggedly refuses to admit their own limitations and lower themselves to accept the advice of others, it’s her empathy and open-mindedness that proves to be the source of her power and resilience. The other characters remain stuck in stagnant, circular patterns of behaviour, but Fiona, who is unafraid to face her flaws and incorporate the examples of others into her life, is ultimately able to better herself and move forward.