"Nobody's really captured the quality of a film festival," observed musician/composer Neil Brand, "You're doing something that's pleasurable, but then the fatigue sets in..." It's true—a celluloid feast like Il Cinema Ritrovato in Bologna is a particular case, too, since so many of the films are rarities. It's like being a cake specialist and suddenly somebody offers you fifty magnificent cakes of unique recipe but says "You have to eat them all in an hour or I'll take them away and you'll never see them again." You plunge in, and even when nausea starts to replace pleasure you can't bring yourself to stop...

Cinephiles like to grumble, and the venues of Bologna attract a certain amount of criticism (one has a bar which runs between the front row and the screen, cutting the subtitles in half; air conditioning is switched on and off at random; and then there's the "simultaneous translations" which come with heavy sighing free of charge) but fortunately the seats are all fairly comfortable, at least compared to my home city's Edinburgh Filmhouse, so I was able to average five shows a day without feeling like a funny balloon animal specialist had been let loose on my spine. The damage was purely mental, a combination of fatigue (screenings begin at 9 and end between midnight and one) and overload (films blur together, and then reality blurs in too, and isn't that the festival director lurking in the background in Toby Dammit?).

In fact, apart from a lovely location and conveniently situated cinemas, Bologna offers astounding value for money: eighty euros buys entry to everything, as well as the 338-page catalog (a feast of information and insight, complete with color gallery). It's inclusive too: the public get free entry to the open-air screenings every night in the Piazza Maggiore.

Weird coincidence: when I attended Toronto Jewish Film Festival my arrival was greeted with thunderstorms and by the end of a week trudging the city with Serbian dandy Milos Tomin, my shoe exploded with an audible pfft— the squishy remains afforded insufficient protection cause my right foot to assume the texture of bubble wrap—and in Bologna I got the impression that thunder was following me around, Frankenstein-fashion, as torrential downpours and cloudy rumblings ("God moving his furniture") again heralded my arrival, and my right shoe, newly purchased, peeled loose its heel. I just got one blister this time, but of the size and contours of a second David Cairns, only even softer and slightly translucent. It looks ready to live an independent life, possibly with its own byline.

Things I shall attempt to write about in some detail on my blog Shadowplay: curious and exciting earlies, Italian compendium film extracts, Marriage, Italian Style, early films by William A. Wellman, movie serials, restored Chaplins, a host of Hitlers, Germain Dulac projected by carbon lamp, and the daughters of Blasetti and De Sica on stage to present their fathers' films. 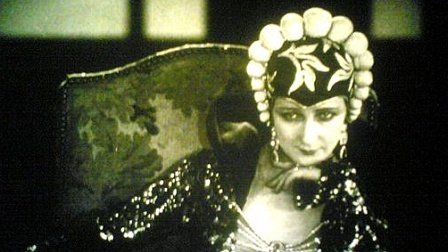 THE LIGHT OF ANOTHER DAY

Two movies screened in the open air using a carbon lamp projector. I saw Germaine Dulac's La Princesse Mandane (1928), part of a season of the versatile lady's work. Best-known for her impressionist and surrealist shorts, Dulac also made more conventional features (and newsreels; and prototype music videos). This Ruritanian romance sidelines narrative in favour of glamor, as a naive engineer dreams of rescuing a princess. In a startling twist, once he frees her she runs off with a ladies' maid (who wears a male uniform). Neil Jordan's Mona Lisa is anticipated, but Dulac is mocking the hero and celebrating the Sapphic iconoclasm.

The carbon lamp, introduced to last year's program and now perfected, gives an old-style lustre to the images: the blacks are darker, and the whole thing has a velvety sheen. "Almost 3D" was one catchphrase used to describe the elusive effect.

1) Conrad Veidt in The Cabinet of Dr Caligari (1919). The new restoration from the film's camera negative not only wipes away a patina of damage—through which the film had hitherto been seen only darkly, allowing us to see the actors faces properly for the first time in decades, thus changing the experience from a musty pantomime enacted before smudgy backdrops to a thrilling, immediate and emotional experience—it also shows us Veidt's private parts through his too-tight leggings. Which may not appeal to everyone, but at least what we see is suitably impressionist: a thin, jagged penile bayonet. 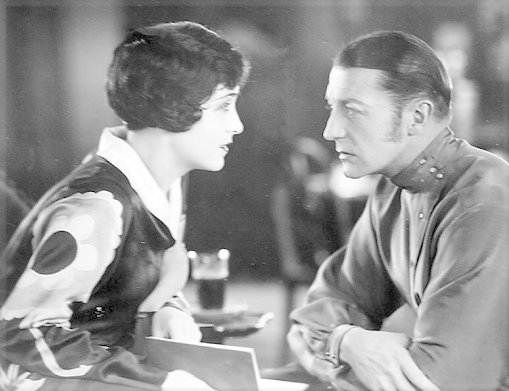 2) Clive Brook in You Never Know Women (1926). This virtually unknown film by William Wellman abounds with striking visuals and deft perfs (the underappreciated Lowell Sherman excels a mean smoothy), which deserve more attention than Brook's body parts. "He's a chin," said Sternberg to Dietrich, but he's also a bulbous set of bollocks, exposed when he emerges from a Houdini water tank in soaking woollen leotard. He plays a jealous Russian knife-thrower, the worst possible combination of personality and vocation, with Florence Vidor as the target of his affections and blades. Perhaps Tod Browning would have made even more of the sinister backstage shenanigans, but Wellman finds plenty of scope for his punchy cynicism. Missed opportunity: "I still have one dagger left," says Brook, but he doesn't use it on world's worst comedian El Brendel.

The Wellman retrospective was a revelation to many viewers, who surprisingly hadn't seen much of his work beyond The Public Enemy (1931) and Wings (1927). Eschewing those familiar classics, the season illuminated rugged westerns like Yellow Sky (1948, a cowboy noir version of The Tempest set in a ghost town) and Westward the Women (1951, feminism and the pioneer spirit). Wellman is also a major figure of the pre-Code era, and a season twice the size could easily be arranged without featuring any duffers.

3) Chaplin in pajamas in the bath in A Night Out (1915). A dark, soggy, shapeless mass: and that's just the film. But the screenings of Chaplin's early movies made for the Essanay company showed the development from raucous Keystone knockabout, with the star as a vicious little thug, often drunk, to the more nuanced later style. The Bank and, most famously, The Tramp, miraculously restored by Lobster Films, introduced sentiment and showed the protag as a marginal figure excluded from romance by societal conventions, and if the combination of pratfalls and pathos didn't quite catch fire yet, it was surely an early clue to the new direction. Most significant may have been The Champion, which doesn't tear-jerk but makes the hero likable, introducing him sharing his last sausage with a persnickety pooch.

4) Some woman in sweaty tights at the Cineteca Bologna.

I tell the story about George Lucas hiring a man to create a stained-glass ceiling for his locations library, and his wife running off with the designer, so that every time George Lucas goes into his library, he sees a lambent reminder of his marital failure. Some very respected film writers laugh wickedly.

A spontaneous round of applause for Gloria Grahame's rendition of "I Can't Say No" in Oklahoma! (1955), screened in a lustrous restoration recreating the full Todd-AO widescreen experience, via the world's only 50 fps DCP. What makes Gloria so funny is her concentration, as her not-very-bright but knows-what-she-likes character strains to put elementary thoughts together, which then emerge as ingenious Oscar Hammerstein lyrics, featuring triple rhyming schemes like you wouldn't believe.

The enveloping stereo sound (from the original magnetic six tracks), widescreen and HFR made Fred Zinnemann's open-air spectacle quite overwhelming. You can practically smell Rod Steiger. 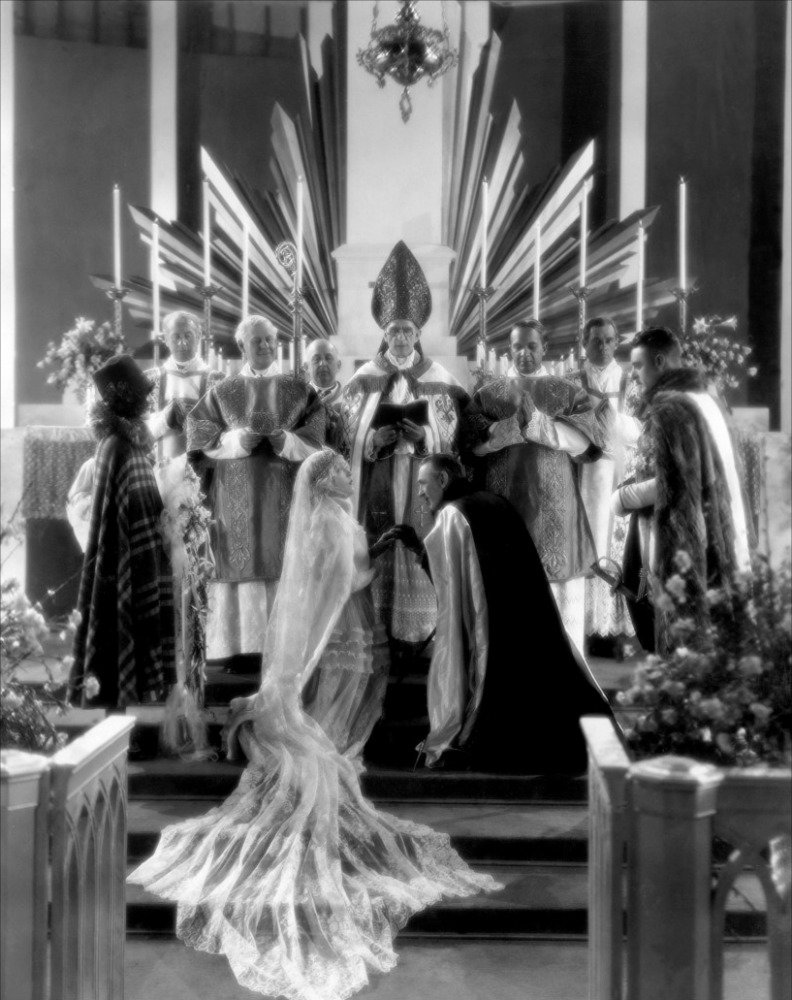 Erich Von Stroheim's The Merry Widow (1925) with live orchestral accompaniment was my supreme highlight. When composer Maud Nelissan contacted the Franz Lehar estate to discuss orchestrating themes from his operetta to accompany the silent classic, she was surprised to learn nobody had ever proposed it before. The interweaving of the existing melodies with Nelissen's original compositions is seamless and at times breathtaking, so that the more romantic the music becomes, the more Stroheim's dark cynicism cuts through.

Louis Feuillade's classic serial adventure Fantômas﻿, a hundred years old, got the Caligari treatment and screened in digital restorations so sharp and flawless as to suggest a Feuillade homage filmed last week. This could almost rob the films of some of their period atmos, but what you lose on les polissons you gain on les galipettes, and when Rene Navarre makes eye contact with you down the barrel of the lens, the immediacy is startling. Fantômas﻿﻿ destroys a century with a glance.

A Hard Day's Night, a mere stripling at fifty, closed the festival with an open-air screening in the Piazza Maggiore, to wild applause. Richard Lester, its director, counted himself lucky to be present, after checking his pulse. It's good to see him getting some of the attention he deserves. 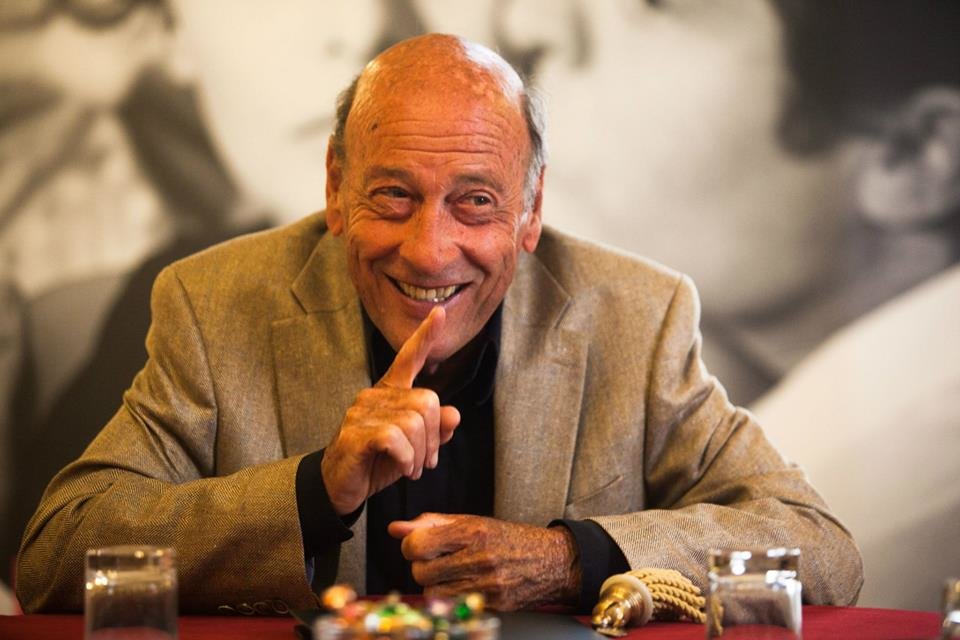 Il Cinema Ritrovato may be the world's best film festival! Telluride and Marrakech are stunning in their own ways, but for a concentrated immersion in film history, I've never experienced anything like Bologna. What's been going on in the world for the last eight days?