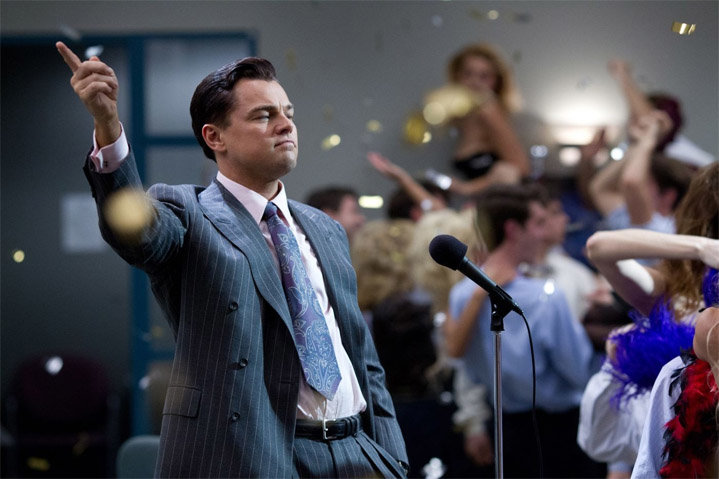 "For a brief, fleeting moment, I’d forgotten I was rich and lived in America.﻿"

The Wolf of Wall Street—﻿﻿Martin Scorsese's first out-and-out comedy since After Hours—﻿﻿﻿transforms the rise and fall of real-life stock swindler Jordan Belfort (Leonardo DiCaprio) into three hours of drug freak outs and privileged misbehavior. It wouldn't be too hard to turn Belfort's story into a tragic cautionary tale—﻿﻿a young man overwhelmed by the lure of sex, drugs, and power, etc.—﻿﻿﻿but Scorsese, DiCaprio﻿﻿﻿, and screenwriter Terence Winter play him up as an overtly comic, ridiculous figure: a big-time brat, incapable of controlling his impulses, who runs his penny stock empire like a demented Greek-letter fraternity, entertaining his pledges / employees with competitions, marching bands, strippers, and rah-rah pep rallies.

Surprisingly, the movie is less decadent style-wise than any of Scorsese's recent work, set mostly in offices and generic mansions lit with realistic, inexpressive flat whiteness. The music cues are eclectic even by the director's standards (the theme song from Goldfinger, Cypress Hill's "Insane in the Brain," the Foo Fighters' "Everlong"), but never gel with the action in any kind of significant way. And yet, even while operating in this kind of low-power mode, Scorsese is able to pile on enough eccentric flourishes﻿—﻿﻿hearing multiple characters' thoughts, monologues addressed directly to the viewer—﻿﻿to create a sense of narrative energy that plays off of DiCaprio's deranged lead performance. ﻿﻿

Scorsese's big, long, hopped-up movies have a tendency to end on abrupt minor notes. Whether it's Ace Rothstein staring out out from behind thick, grandpa-ish prescription sunglasses at the end of Casino, "schnook" Henry Hill grabbing his morning paper at the end of Goodfellas, or Howard Hughes repeating a phrase ("the way of the future") to his reflection at the end of The Aviator, these scenes feel disconnected from the narrative flow of the film. They are deliberately off-rhythm, and reveal a sad emptiness which the protagonist has been hiding inside of himself all along. All of the relationships the protagonist formed over the course of the film are now gone; the hole he was trying to fill is all that he has left.

It's difficult to say whether The Wolf of Wall Street works as anything more than a series of comic set-pieces without bringing up the ending, which finds ﻿﻿Belfort re-enacting an earlier scene from the film in a different tone of voice and with a new audience. The familiar Scorsese-coda loneliness registers, but it's only meaningful in context, and the fact is that—﻿﻿﻿for all of its gonzo narrative and performative energy—﻿﻿﻿Wolf doesn't seem to create much of a psychological context for Belfort. In the film, he functions first and foremost as an entrypoint into a certain kind of behavior; his whys are less important than his hows.

At lunchtime in a tony restaurant, Belfort's first boss, Mark Hanna (Matthew McConaughey), shares with his newest employee the secret to stock-trading success: develop a cocaine habit and have at least two orgasms a day; if you have to go to the bathroom to jerk off while at work, think about money. Hanna oozes dopey Zen calm, sitting at his corner table, snorting blow in full view of the customers and staff. The young Belfort sits across from him, awestruck.

The Wolf of Wall Street never bothers to explain why Belfort set out to become a stock trader in the first place, why he ended up quitting drugs, or why he married his first wife, but it establishes early on why he wanted to become successful: so that he could afford a life like Hanna's, where he could do or say anything without immediate repercussions.

Belfort loves to boast about having “done everything,” at least as far as sex and drugs are concerned; over the course of the film, he hosts orgies on private jets, snorts cocaine from every possible surface and orifice, and—during a standout sequence—consumes enough Quaaludes to regress into a semi-primordial form, Altered States-style. One gets the sense, though, that he’s isn’t getting off on the acts themselves, but from his ability to do them. He can, so he does; his motivations are circular. They’re also psychologically vague: whatever originally motivated Belfort to start the cycle of wanting and doing—and whatever allowed him to break it later on—remains off-screen.

Belfort's crimes are only marginally less obscure. During one of his fourth-wall-breaking monologues, he tells the audience that it doesn't matter if they understand what's actually going on in his financial empire—the only thing they need to know is that it's all very illegal. Wrongness—social, legal, emotional—becomes the subject of the film. These people can do this, it seems to say, and it doesn't matter why. Money can't buy happiness, but enough of it can buy a degree of freedom from consequences. There's a certain smugness to Belfort's tone in the final scene of the film; he seems lonely and empty, but also strangely satisfied. Once rich, he is now infamous—meaning that he still gets to lead a life where no one expects him to behave morally.