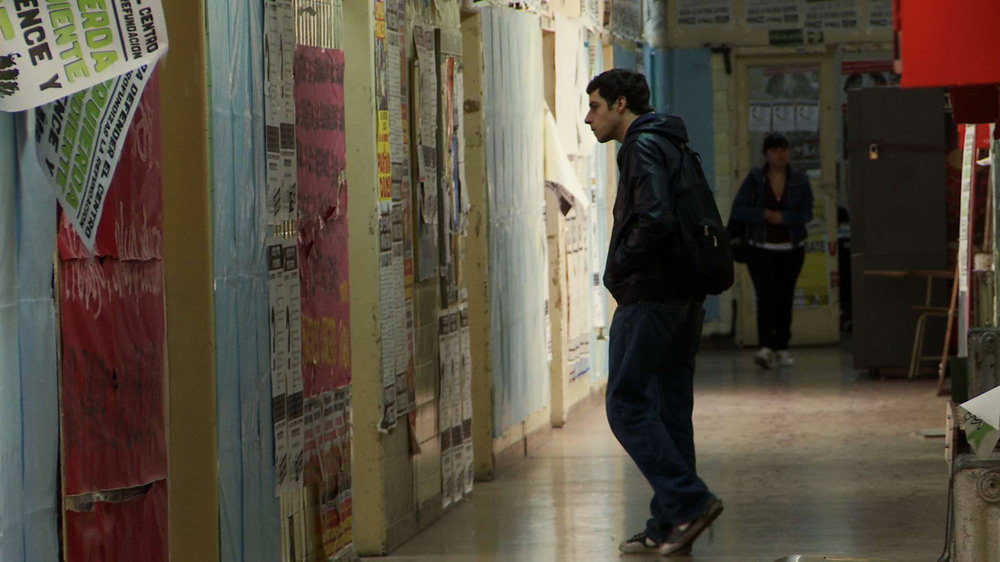 Starting off with its premiere at BAFICI, Santiago Mitre's debut feature El Estudiante (The Student, 2011) has proceeded on an aggressive campaign trail, stopping to woo votes at Locarno, the Toronto International Film Festival (TIFF), and next at the New York Film Festival.

In his review from Locarno, indieWire's Eric Kohn dubbed Santiago Mitre "a South American Aaron Sorkin." Mitre has previously worked as a screenwriter, crafting the scripts for Leonera (2008) and Carancho (2010), both directed by Pablo Trapero.  He also co-directed the film El amor—primera parte (2005) with Alejandro Fadel, Martín Mauregui, and Juan Schnitman.  I caught up with Santiago in Toronto where we sat down to talk about El Estudiante.  My thanks to TIFF publicist Lina Rodriguez for facilitating the interview and for providing translative assistance. 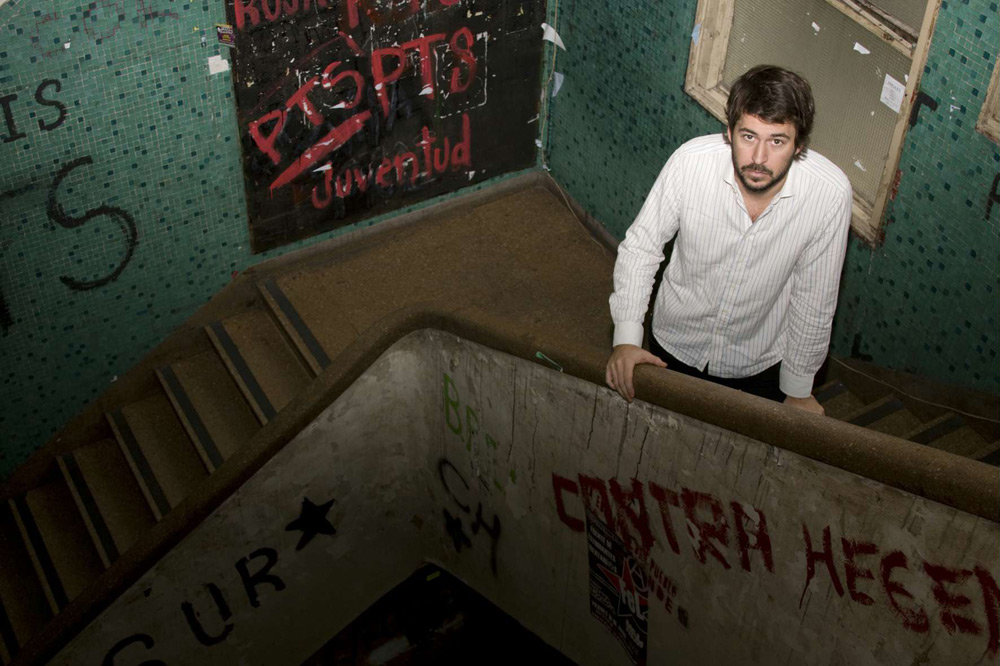 NOTEBOOK: El Estudiante rests on the shoulders of your lead actor Esteban Lamothe.  What were the qualities within Esteban that convinced you he could carry this film as student activist Roque?

SANTIAGO MITRE: I started writing the script already knowing that Esteban was going to be the actor.  I've known him and his work in the theater for a long time.  He's a great actor, one of the best of his generation. Buenos Aires has a huge independent theater movement and Esteban has acted in many productions within that movement.  I saw that he had a precision in his performances, in the subtlety of his gestures, but I was concerned that this might not translate to cinema and that I might be flirting with disaster.

Political spaces are always about dialogue: what you are saying and how you are saying it.  El Estudiante is interested in the way Roque observes these political processes.  The film is concerned with his gaze, with seeing things through his eyes and—because the character Roque has a precise way of seeing things and Esteban is so precise as an actor—that's why I decided to cast him.

NOTEBOOK: I like how you specify the role of dialogue in these political frameworks.  There's a lot of talk, a lot of fast talk, in El Estudiante.  I tried to keep up with it at first and then realized that—as you say—what was being said was not as important as how it was being said.

MITRE: There were different reasons for focusing so much on the talking. First, El Estudiante is an independent production so we had to rely on short takes that referenced larger spaces, due to production budget issues.  Putting ideas out to an audience is cheaper through sound than through image.  Also, because the film is always close to its lead character, the point of view of the film is subjective and always related to the main character.  The dialogue, all that is said in the film, is not so important dramatically.  It's a context mainly.

NOTEBOOK: How scripted was all that dialogue?

MITRE: It was all scripted.

NOTEBOOK: Wow.  Can you speak about your stylistic choice to guide the narrative through a seemingly objective voiceover?  As with your previous collaborations with Pablo Trapero, El Estudiante has a propulsive rhythm that compels the narrative forward, but then you've tempered that propulsion through the voiceover.

MITRE: Two things: the film is a fiction and it was always my intention to have a story that would observe politics on a university campus.  But I wanted to use the story as a platform to think about politics in other contexts outside of the university; to think about politics throughout the country.  The narrative voiceover underscores that the story is being told in the third person and highlights the element of fiction.  What particularly interested me was that those elements of fiction could have a dialogue with events in the political history of Argentina.  The voiceover introduces and tracks a lot of the historical events that have taken place, like the Alfonsínismo movement that started in the 80s at the beginning of Argentine democracy.

MITRE: A reference to Raúl Alfonsín, who was elected Argentina's president in the early 1980s.  So, again, my interest was in Argentina's political history. Historical Peronismo from the 1960s is talked about a lot, as is Lisandro de la Torre, who was an important leader of the Argentine Socialist movement.

NOTEBOOK: That reminds me of the scene where Roque's political mentor Acevedo (Ricardo Felix) sings Peronista chants with Roque's father.  At Variety, Robert Koehler astutely qualified this scene as "a sometimes dialectical conversation between an older generation of Peronists who suffered in the 1970s 'dirty war,' and the younger generation, also leftist, but far more skeptical of the Peronist populist tradition."  Can you speak to that scene between the "fathers"?

MITRE: The film is constantly working with father figures—the father of his first girlfriend, the professor Acevedo—so I found it interesting that Roque's actual father has a way to reference his influence on Roque's character.  The film confirms two different ways to regard politics, not only through today's youth, but through the older generation who practiced politics in the 70s in Argentina.  They're confrontive points of view and that's especially seen within that scene of the film.

NOTEBOOK: Again, the film's propulsion strikes me as one of its major strengths.  How did you achieve that propulsive rhythm through your editing?

MITRE: People who practice politics are always on the edge so political activity has a sense of urgency to it.  When I wrote the script, I didn't realize I was writing a thriller.  But that state of tension and intrigue that we find in politics is ultimately what makes El Estudiante a thriller.

NOTEBOOK: I appreciate your recognition that El Estudiante is a thriller.  But it's not a thriller in the sense of how we usually think of thrillers—as crime dramas or police procedurals—but it is a procedural, in the sense of the story being about Roque's growth and how he achieves an awareness of how to operate as a political animal.  It's kind of a coming-of-age story stripped of nostalgia and sentiment and infused with the energy—as you say, the urgency, the tension, the intrigue—of a thriller.  His growth registers in his eyes.  They start out innocent and liquid and inquisitive, but by the final scene they've progressed to calculation and unwavering conviction.  I found his growth from an innocent to a political animal erotic, in the sense that you coupled his political maturation with a series of affairs with women that crossed his path.

MITRE: That's a very good observation.  At the beginning of the film, Roque's main objective is to exercise his capacity to attract and seduce women.  That capacity in seduction is what will enable him to succeed in politics.  As a politician, he has to be believable and appear sincere so that people will like him.  He operates off a sense of hunger.  He meets a woman and he wants her.  He meets another woman and he wants her as well.  It's the same ambition as in politics: he wants to seduce.  For him, it's very effective.  It's the way that he moves ahead.  Every objective he puts in front of himself, he achieves.  The movie shows this transformation from his seducing women to raising the stakes and seducing constituencies to achieve power within politics.

NOTEBOOK: For its North American premiere, El Estudiante was programmed at the Toronto International Film Festival in the City to City programme, whose initiative was to spotlight cinema from Buenos Aires. How do you feel your film fits into that spotlight?  Clearly, El Estudiante is a quintessentially Argentine film, a film set in Buenos Aires, however the film is speaking across regional specificities and national boundaries to international audiences, who are appreciating the energy of the film's central conflict.

MITRE: That's a difficult question to answer.  When I was writing the script and then shooting the film, I worried at first that El Estudiante was too Argentine a film and that I would have trouble communicating with an international audience.  I wanted to work in a classic manner so that the moral themes of the film should be understandable to diverse audiences.  Mark Peranson, one of the programmers at Locarno, described El Estudiante as a "Balzacian debut."

El Estudiante was shot almost entirely in UBA, the University of Buenos Aires, which is the largest public university in Argentina.  The film is based in political activism within the university.  Student activism is very important in public universities throughout Latin America, just as politics themselves are present and widely discussed in the lives of most Argentines.  The universe the film depicts is specific, particularly with regard to the names of the political parties that exist only within the university.  Yet somehow this creates a political discourse that becomes almost abstract.  Actually, even a lot of Argentines don't understand the specificities of university politics in Buenos Aires but what remains interesting is the essence of politics: how militants relate with each other; how they form alliances; how they strive for power.

NOTEBOOK: How did you become familiar with the university environment and its student politics?

MITRE: The film is entirely fiction, even though it refers to a real world that exists in the universities, especially UBA.  But all the characters, and even the names of the parties portrayed in the film, are fictional.  I conducted a long period of research to portray the specific way in which university politics work.  I spent a year and a half researching, which was more than the time I spent writing the script.

NOTEBOOK: I'm already a great fan of your writing—both Leonera and Carancho were favorite films of mine in past years—but what encouraged you to shift from scriptwriting to sit in the director's chair?  How different is it to direct your own writing, in contrast to letting someone like Trapero direct your writing?

MITRE: I always wanted to be a director.  My scriptwriting was more coincidental than not.  I met Pablo when he was looking for a writer for his next film.  We became friends and started working together and working with him as the director has been a great learning experience.