Part of our continuing partnership with the online film journal, cléo. Every month, cléo will be presenting a great film to watch on our video on demand platform. In conjunction, we'll be hosting an exclusive article by one of their contributors. This month Eleni Deacon writes on Calvin Thomas & Yonah Lewis' breakthrough feature debut Amy George, which is available to watch starting August 31st in the US, Canada, Australia, New Zealand, Netherlands, Italy—and will be playing in Turkey, Mexico, and Germany later in September.

﻿In the early minutes of Amy George (2011), Jesse gets a challenge. "It's called the Fearless Project," his teacher says, "And what I want you to do is take a self-portrait without it being a literal photo of yourselves." This is a heavy task for a classroom of 13-year-olds: it demands self-conscious self-definition at age when most kids have only begun testing the waters of self-discovery. Toronto microbudget filmmakers Calvin Thomas and Yonah Lewis train their lens on Jesse (Gabriel del Castillo Mullally) as his creative ambitions—and frustrations—overlap with the anxieties in his day-to-day life. He wants to make art, but it turns out that's tricky. True art, says some book Jesse checks out from his school library, can only come from "suffering and outrage of mortal justice." And sex.

Which is a problem, because Jesse has limited access to both. His mom and dad, played respectively by ClaudiaDey and Don Kerr, are patient hipsters who nurture his pursuits from their relaxed middle-class home. They didn't even spank him! Meanwhile, the girls he knows—among them the eponymous Amy (Emily Henry)—appear out of reach. Jesse wants to ace the Fearless Project, but it would seem, at first sweep, that he has no sources of fear to begin with. It's in the mundane rhythms of normal-kid life, however, that Amy George situates its dangers. Jesse may not suffer any pangs of mortal outrage, but becoming an artist—or an adult—still means peering into darkness. 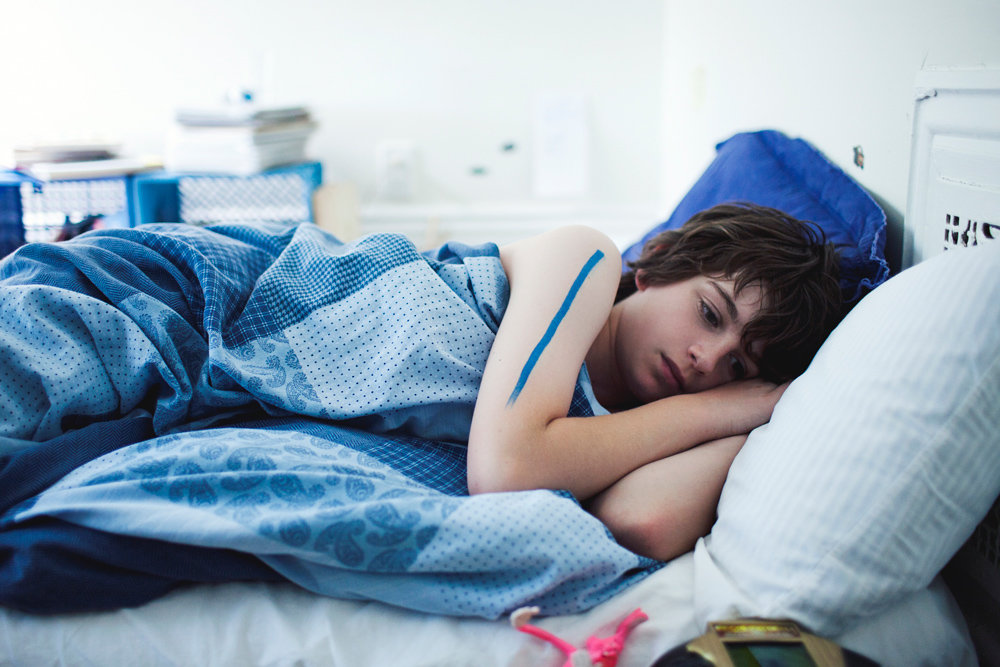 As Jesse kicks around his neighbourhood, old-school camera dangling from his neck, distant threats poke at his periphery. Tara (Natasha Allan), a family friend, can't stop thinking about a faraway earthquake that killed thousands of people. Someone steals money from Jesse's mother's dresser. His friend Liv's dog goes missing. And at Amy's house, a burglar enters in the night, leading to an altercation that sends her father to the hospital for stitches. But none of this is outwardly scary. The earthquake happened elsewhere; Jesse's parents are more annoyed than disturbed by the theft; Liv cheerfully hunts for her dog; and Amy shrugs off the home invasion like she's seen it all before. Thomas and Lewis paint Toronto in dim but familiar light—the sticky grey clouds and liquid dusk suggest a comforting kind of gloom. One evening, Jesse stands at a park fence, idly naming things. "There's a slide. And another slide. And even another slide," he says, trailing into an exhaustive list of everything he sees—cars, people, a bucket. He notices nothing remarkable, but that's the point: the city's ordinary dangers are equally commonplace features of this even-keel landscape.

And it is against this backdrop that Jesse teeters into his sexuality. A few days before the attempted robbery at Amy's house, he snuck up to her window and snapped her photo. The flash went off, he was caught, and we never see the developed image. Notably punier than most of the girls in his class, Jesse hardly reads as a menace—and he's definitely no Romeo. But his fenestral misstep is a precursor to more ambiguous behaviour to come. With her parents at the ER following the break-in, Amy spends the night at Jesse's house. She's older than him, and bigger—her long limbs and peeking-out bra straps signal a more advanced sexual awareness. For Jesse, Amy is another danger: she confronts him about spying, she asks for beer—and her presence inspires, if not his art, then the more reckless reaches of his adolescent libido. To pass the time, Amy suggests they hypnotize each other. Jesse isn't susceptible, but she slumps over as soon as he finishes counting down from 10. His crush unconscious—or pretending to be unconscious—Jesse unzips her pants and touches her underwear.

Through these furtive encounters with Amy, Jesse engages a tense process of sexual self-discovery that occurs in tandem with the discovery of his capacity as a sexual predator. But despite undoing a sleeping girl's fly, he is not that. After confiding in Tara that thinks he raped Amy, the older woman explains that rape is a "big word" for what happened—Amy likely wasn't even asleep. If this is the case, then both teens were pushing the boundaries of a type of sexual expression that isn't straightforward and sweet, but mysterious and kind of risky. This doesn't mean Jesse is aberrant. It means he is uncovering the potential dangers inherent in sex—both those posed to him and those he can inflict.

And what about the Fearless Project? Tara, an alcoholic who turns out to have stolen Jesse's mother's money, is the only character who comes close to facing the type of hardship Jesse thinks necessary to create—but she pfftts at the idea that art comes from suffering. "Fuck that, man," she says, "Get out of the house." Jesse's final submission to his teacher echoes Tara's who-cares tone: he hands in a photocopy of a pornographic image of a naked woman sitting spread-legged on the edge of a bed, the words "bedroom lips" printed in Goosebumps-esque font at the bottom of the page. This is what he posits as a representation of himself. The picture is crass—an in-your-face masturbation aid that nonetheless reflects the more dangerous physical instincts Jesse finds within himself. But it's also symbolic of Amy, who draws on her legs in blue marker, literally turning her body into art. This connection between art and physicality links back to his analog camera—from the beginning, his methods of creation are distinctly tactile. And while it's not clear if his smutty self-portrait is an act of fearlessness or a "fuck you," one thing is certain: on his own scale, he suffers.