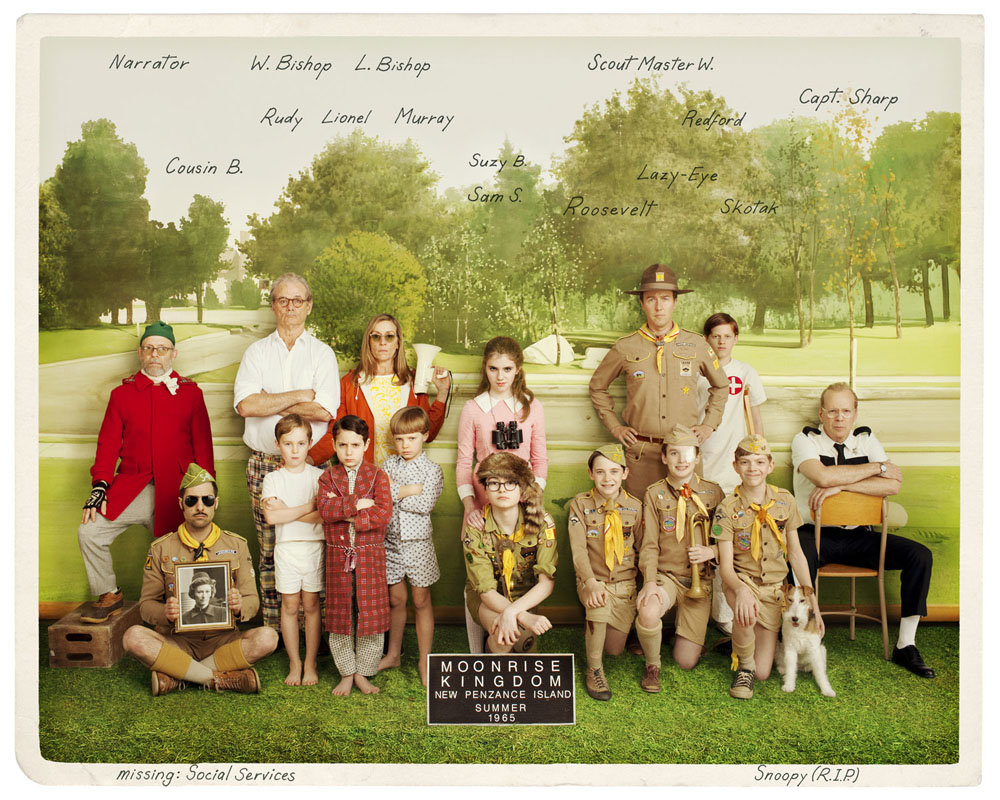 Two of the most eagerly anticipated films of 2012 would have to be Wes Anderson's Moonrise Kingdom, set to open Cannes on May 16, and Ridley Scott's Prometheus, opening wide in early June. For Entertainment Weekly, Rob Brunner gets a few words with Edward Norton and Anderson, who tells him that there are "two movies that I really love that were both kind of huge inspirations for Moonrise Kingdom. One is a movie called Black Jack that's directed by Ken Loach. The other one is another British movie that's the first thing Alan Parker ever did. He wrote the script. It's called Melody. They're both movies that I only found as I worked on this story. I was looking for movies that are about pre-teenage romance. And there's a Truffaut movie Small Change. That's really one of the inspirations for this movie, because it's what made me start thinking about doing this sort of story."

As for Scott's "sort-of-prequel to Alien," as the Telegraph's Tim Robey calls it, "it's going to be more or less a new story, only the very end of which will connect us up with the science fiction mythos Scott originally established in 1979. The question Scott began this film wanting to answer, which Alien's sequels hadn't explored, is best put in his own words: 'Who's the big guy in the chair?' On stage with his top-lining cast members Noomi Rapace, Michael Fassbender and Charlize Theron, Scott took questions this morning at a private preview, after a selection of scenes — what you might call an exposition reel — setting up the movie's premise." Possible spoilers follow; more from Matt Mueller at Thompson on Hollywood.

In other news. Nuri Bilge Ceylan will receive this year's Carrosse d'Or from the Society of Film Directors (SRF) at the opening ceremony of the 44th Directors' Fortnight (May 17 through 27), reports Fabien Lemercier at Cineuropa.

The lineup for this year's Far East Film Festival in Udine (April 20 through 28) is now set.

Austin. The South East European Film Festival opens today and runs Tuesdays through May 22. In the Chronicle, Kimberley Jones notes that "the program winds from war-ravaged Bosnia (in the bleak comic-drama Fuse) to postwar, economically depressed Serbia (a Faustian The Trap), from battle-scarred Croatia (Witnesses, wherein a horrific act is reviewed, Rashomon-style) to an ancient blood feud in an Albanian village (Alive!). The series ends, however, in a sunnier spot: the Fifties-era comic university romancer Vesna, one of the first triumphs of the Slovenian film industry, so beloved the nation named its highest film honor after it."

Reading. Always (1989) "should be re-viewed as a quintessential Spielberg film," argues Michael Koresky: "it depicts the belief that our choices are at once motivated by a greater power and a distinct set of humane ethics. That Spielberg filters it all through classical Hollywood narrative tropes is wondrous. Here, all the director's recurrent stylistic motifs become one with theme: the shafts of heavenly light that appear to emanate from everything, the delicate multiplane framing that both unites and separates the actors, the pop-cultural references that somehow function outside of time."

Following up in Reverse Shot's unfurling Spielberg issue is Matt Connolly on Hook (1991), which "has all the trappings of an archetypal Spielberg classic: fast-paced action spectacle; literal and figurative flights of fancy; the yearning for familial wholeness and the unearthing of youthful energy. That’s the problem. It’s a simulacrum of Spielberg wonder."

In the works. Deadline's Mike Fleming reports that Alex Proyas will direct his own adaptation of Robert Heinlein's 1942 novella The Unpleasant Profession of Jonathan Hoag. Also: Tom Hanks may play Walt Disney in Saving Mr Banks, the story of the making of Mary Poppins. Emma Thompson might be on board as well.

Viewing. At Press Play, Volker Pantenburg and Kevin B Lee, who'll be talking about "Teaching Cinema on TV and the Web" at the Oberhausen International Short Film Festival on April 28, present a couple of precursors. In the first (6'03"), from 1987, "Jean-Luc Godard compares the use of slow motion in Stanley Kubrick's Full Metal Jacket with that of another film about Vietnam, 79 Springtimes of Ho Chi Minh by Santiago Alvarez." The second (14'47") is a clip from Pedro Costa's film on Jean-Marie Straub and Danièle Huillet, Where Does Your Hidden Smile Lie? (2001).﻿