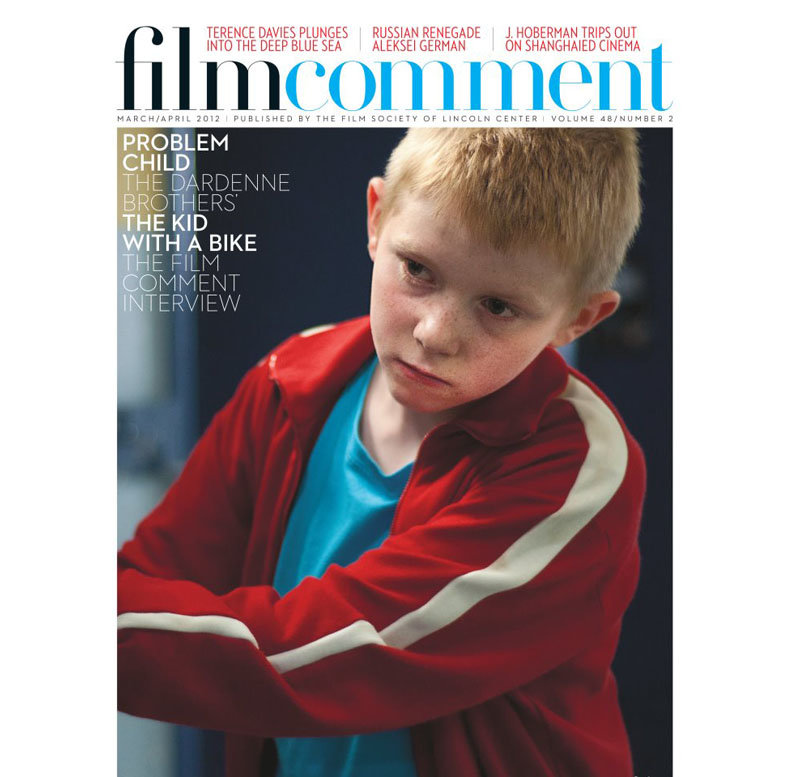 "The agony and perverse ecstasy of unrequited love permeate Terence Davies's The Deep Blue Sea," writes Graham Fuller at the top of his interview with the director. Also in the new March/April 2012 issue of Film Comment: Jonathan Rosenbaum remembers Gilbert Adair (plus a few online exclusives: Adair on Mae West and his "Cliché Expert's Guide to the Cinema"), Anton Dolin examines "The Strange Case of Russian Maverick Aleksei German" (see, too, J Hoberman's 1990 piece for FC on German) and Terrence Malick's The Tree of Life tops the Reader's "20 Best Films of 2011" Poll — plus comments.

Online exclusives: Margaret Barton-Fumo interviews Alejandro Jodorowsky, Roger Greenspun's "Leaving the Times, Or: How I Came to Lose My Job as a Second-String Movie Critic" from the January/February 1974 issue, and the Top 20 Worst Winners of Best Picture Oscars. 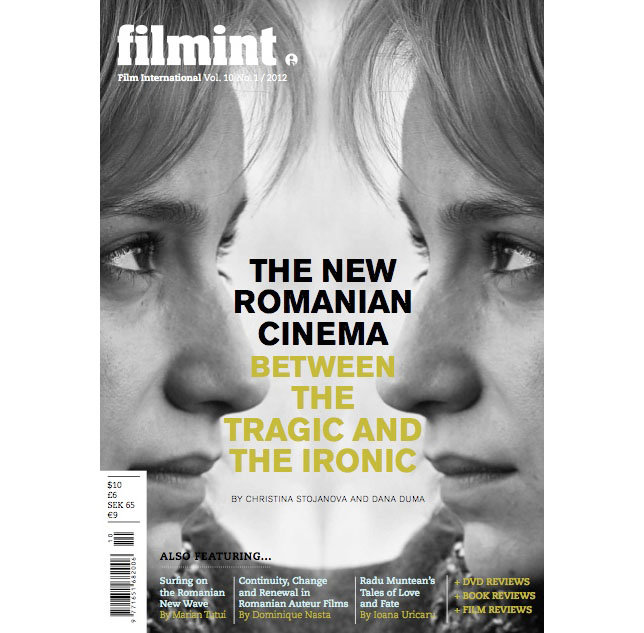 Film International 55, a special issue on the Romanian New Wave, is on its way.

More reading. Kristin Thompson: "I'm going to be heretical and say that [John Ford's How Green Was My Valley] deserved to win over [Orson Welles's Citizen Kane]." So "if How Green is so fantastic, why didn't Bordwell and Thompson use it as their central example of a narrative film in Film Art? Why is Kane in that spot? There's a simple answer to that: Kane is a very teachable film, and How Green, to say the least, is not."

Farran Nehme revisit's Lang's The Woman in the Window (1944).

Books. The BBC's Vincent Dowd talks with Douglas Crimp about "Our Kind of Movie": The Films of Andy Warhol, which'll be out from MIT Press in April.

Cinephilia in the Age of Digital Reproduction, Volume 2: Film, Pleasure, and Digital Culture, edited by Scott Balcerzak and Jason Sperb, will be out from Columbia University Press in May.

Festivals. "From March 9-13, AnOther will be joining a band of castaways washed up on the shores of the Thai island, Yao Noi, for a unique celebration of cinema co-curated by Apichatpong Weerasethakul and the prolific creative catalyst Tilda Swinton. Film on the Rocks Yao Noi is 'not exactly a film festival, as one might expect such a thing to be.' Swinton explains, 'More a playpen, a hiatus — a happening… the ultimate luxury: time to look around you in a new place. Henry James puts it best: "To live in the world of creation — to get into it and stay in it — to frequent it and haunt it — to think intently and fruitfully — to woo combinations and inspirations into being by a depth and continuity of attention and meditation — this is the only thing — and I neglect it, far and away too much; from indulgence, from vagueness, from inattention, and from a strange nervous fear of letting myself go. If I vanquish that nervousness, the world is mine."'"

Yesterday, the Tribeca Film Festival, running from April 18 through 29, unveiled its competition lineups. IndieWIRE's Eric Kohn talks with the festival's new artistic director, Frederic Boyer, "formerly the head of Cannes' Directors Fortnight sidebar," and Genna Terranova, who's "stepped into the role of director of programming, replacing David Kwok, who left the festival last year," about more than a few of the highlights of this year's edition.

Paolo Ferrari is the new president of the Rome Film Festival, paving the way for the nomination of Marco Müller as artistic director, reports Camillo de Marco at Cineuropa. 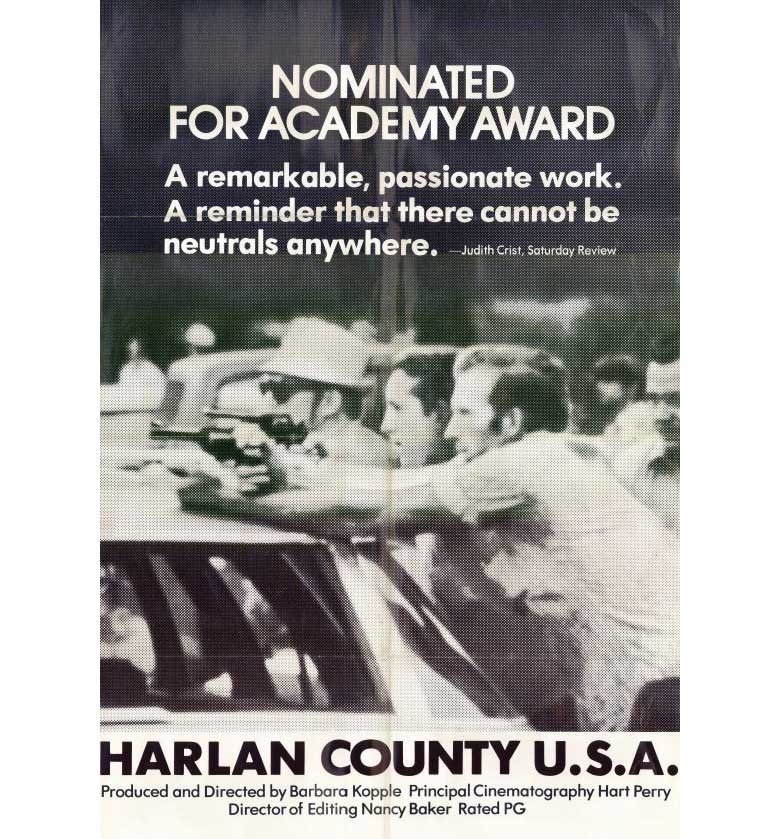 The 55th San Francisco International Film Festival (April 19 through May 3) will present the Golden Gate Persistence of Vision Award to Barbara Kopple and has announced the films in competition for the New Directors Prize and the Golden Gate Awards for documentary features.

"Ross McElwee (Sherman's March, Bright Leaves) will be a guest of honor at Durham, North Carolina's Full Frame Documentary Film Festival, and as part of his trip to the festival, he has programmed a series of eight features and two short films to be a part of a special retrospective series about families," reports Bryce J Reninger at indieWIRE, where Austin Dale reports that this year's edition will open with the world premiere of Laurens Grant's Jesse Owens: "The film about the African American track and field star is produced and written by Full Frame Tribute honoree Stanley Nelson. Nelson will receive a tribute with a line-up of four of his titles: The Black Press: Soldiers Without Swords, Jonestown: The Life and Death of Peoples Temple, A Place of Our Own and Sweet Honey in the Rock."

Amsterdam. "The Stedelijk Museum proudly presents Blues Before Sunrise, a project by artist and filmmaker Steve McQueen that will take place in Amsterdam's largest public park, the Vondelpark." 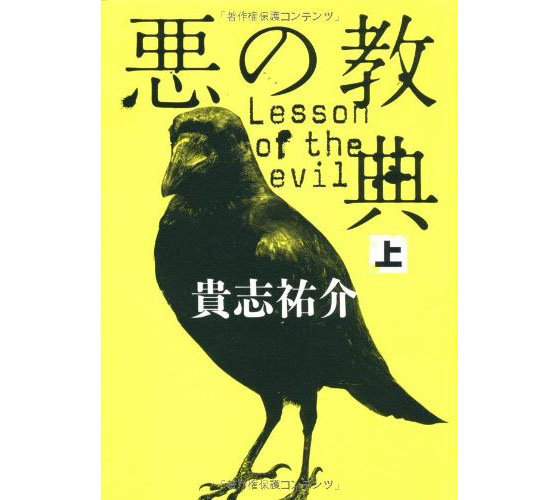 In the works. Takashi Miike will adapt Yusuke Kishi's dark novel Aku No Kyoten (Lesson of the Evil), reports Twitch's Todd Brown: "Hideaki Ito will take the lead role, a school teacher who maintains a smooth exterior masking sociopathic tendencies — tendencies that play out as he systematically murders his own students."

Woody Allen joins Sharon Stone in John Turturro's Fading Gigolo, reports Variety. "Turturro and Allen will play cash-strapped best friends who decide to go into the gigolo business together and subsequently attract the suspicion of the Hasidic Jewish community in which they live."

"Five years after his Oscar-winning drama There Will Be Blood hit cinemas, Paul Thomas Anderson's follow-up The Master looks set to arrive on the big screen in October, according to one of its financial backers," reports the Guardian's Ben Child.

Michael Peña will play César Chávez in an English-language biopic to be directed by Diego Luna, reports Anne Thompson.

Obits. "Robert B Sherman, who has died aged 86, was part of one of the most unusual songwriting teams of all time," writes Michael Freedland in the Guardian. "He and his younger brother Richard may not be as well known as other pairs of composers and lyricists, but they will for ever be remembered as the writers of Mary Poppins, The Jungle Book and a swath of other productions from Walt Disney Studios." At Movieline, Jen Yamato collects nine clips.

"Actress Joan Taylor, best remembered for two sci-fi / horror B movies of the late 1950s, died March 4," reports the Alt Film Guide's Andre Soares, who offers his impressions of Earth vs  the Flying Saucers (1956) and 20 Million Miles to Earth (1957).

Browsing. "Here, on the anniversary of Stanley Kubrick's death — March 7, 1999, at the age of 70 — LIFE.com presents rare and unpublished photos from the Spartacus set by LIFE's JR Eyerman, who, along with writer David Zeitlin, spent time chronicling behind-the-scenes action on the massive, $12 million production."﻿

For news and tips throughout the day every day, follow @thedailyMUBI on Twitter and/or the RSS feed.﻿﻿