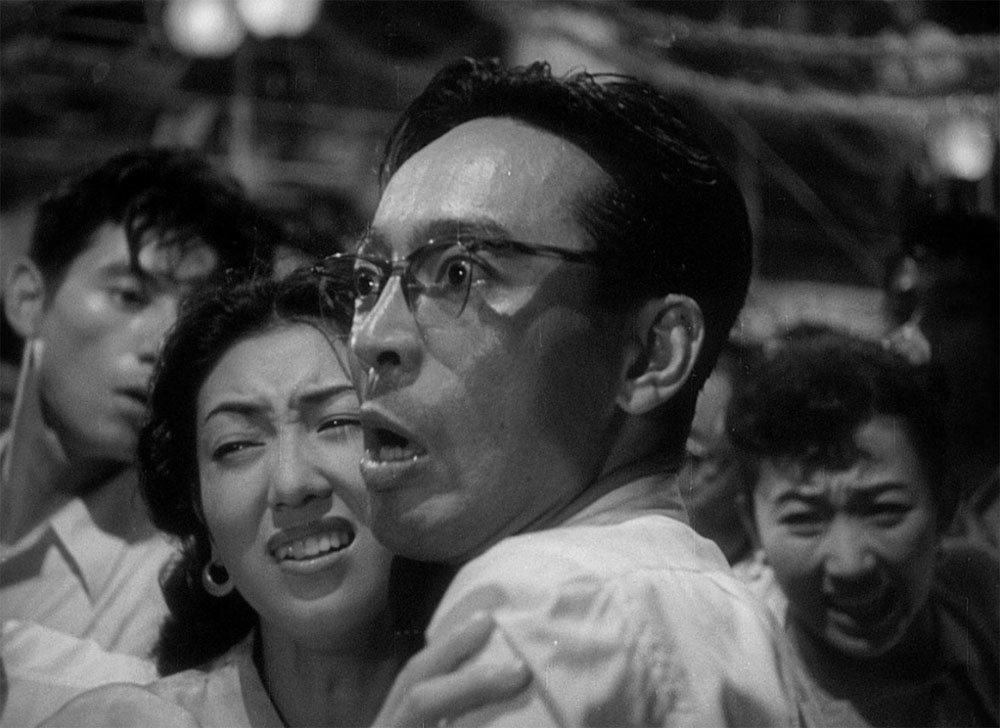 "From the scary thuds and mysterious roars that accompany the no-frills titles to the bizarrely poignant final image of the monster, alone at the bottom of the ocean, Ishiro Honda's 1954 Godzilla is all business and pure dream." So begins the essay by J Hoberman included in the typically extensive Criterion DVD and Blu-ray packages, out today, reviewed and recommended by David Anderson at Ioncinema and Bill Ryan; Gary Tooze takes a close look and listen to the image and audio quality. Related reading: Sean Axmaker's Godzilla primer at GreenCine. Updates, 1/25: Budd Wilkins reviews the "monstrously entertaining package" for Slant, giving it 4.5 out of 5 stars.﻿ More from Steven James Snyder in Time.

In other news. "The closing ceremony of the Kustendorf International Film and Music Festival 2012 began with the premiere screening of Emir Kusturica's short movie, Our Life, which is part of a larger project, Words with Gods, in the production of Guillermo Arriaga…. The winner of the festival in a competition of twenty films is the Spanish movie, Alto Sauce, by the director Fernando Pomares."

The Way Home: The Films of Turkish Master Yilmaz Güney, an eight-film retrospective at Toronto's TIFF Bell Lightbox, opens on Thursday and runs through February 5. Blake Williams has an overview at Ioncinema.

The Arab Spring has been on the Berlinale programmers' minds all year and today they'll pulled together a list of films screening in nearly every section, including the Market, as well as panel discussions and other events under the thematic heading From and About the Arab World. The festival also noted today that the Berlinale Co-Production Market will present 12 novels with "outstanding potential for the screen" to producers at its "Books at Berlinale" day, February 14.

"The International Film Festival Rotterdam has selected 196 short films from more than 3,500 submissions for its main program Spectrum Shorts."

In the works. The Playlist's Kevin Jagernauth reports that Adam Lough will direct Mark Webber and Chloë Sevigny in Panarea, written by Adam Mansbach (Go the Fuck to Sleep), with Jim Jarmusch producing.

Also at the Playlist, Jen Vineyard lays out her extensive notes on David Cronenberg's conversation at the Museum of the Moving Image the other night. Turns out he's been working on a novel for a few years and it seems he's got a few more years to go with it, too.

Reading. Girish Shambu has a new post, loaded with need-to-see links, of course, but first: "Contextual knowledge is not a prerequisite for appreciating cinema, but it definitely can, whenever available, contribute to a deeper and wider understanding of both the film at hand and its place within multiple larger structures — social, historical, political, etc…. Case in point: I've enthusiastically followed the films of Jia Zhangke for almost a dozen years now but a fascinating piece in a recent issue of New Left Review — 'Poetics of Vanishing: The Films of Jia Zhangke' by Zhang Xudong — deepens my view of his films by situating them in certain revealing particularities of background."

Viewing (34'17"). Karsten Meinich and Kalle Løchen talk with Olivier Assayas about his career as a critic and filmmaker.﻿