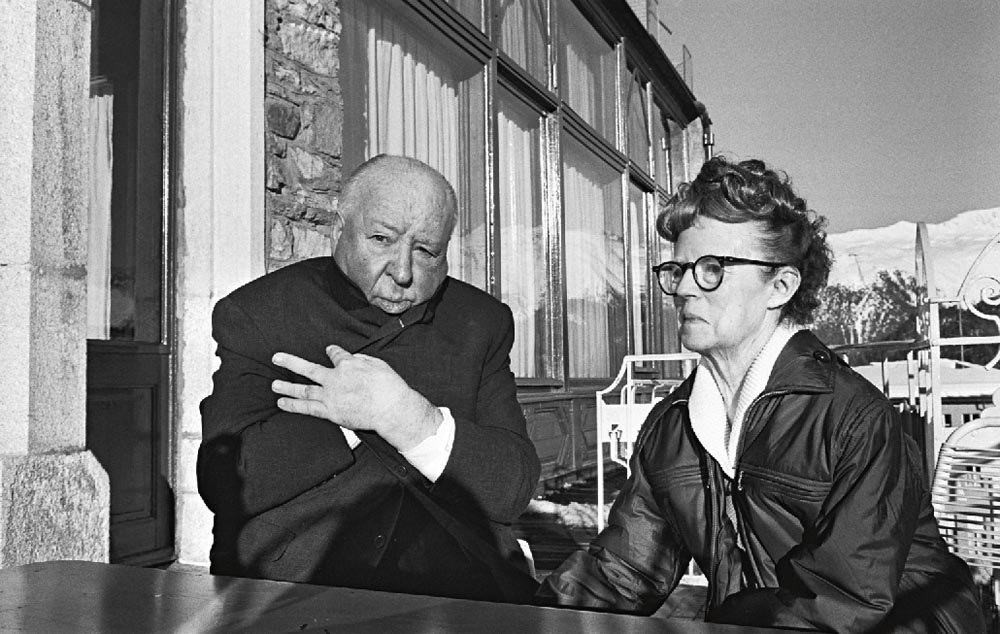 Just yesterday, we got word from Deadline's Nancy Tartaglione that Sienna Miller and Toby Jones would be playing Tippi Hedren and Alfred Hitchcock in the BBC-HBO co-production, The Girl. Later that same day, the Hollywood Reporter's Borys Kit broke the news that, after four years in development, Alfred Hitchcock and the Making of Psycho "is in the process of being set up at Fox Searchlight. Anthony Hopkins, who is attached to play Hitchcock, and Sacha Gervasi (Anvil! The Story of Anvil), who is directing, are making the move and are being joined by Helen Mirren, who will play the filmmaker's wife, Alma Reville."

The Playlist's Kevin Jagernauth: "The subject matter is great stuff for movie buffs. Psycho was a project that Paramount hated. Hitchcock was originally going to direct No Bail for the Judge with Audrey Hepburn but had to scrap those plans when the actress became pregnant. So he moved on to Psycho, and the studio was so negative on the project they gave him a paltry budget and resources, leading the director to back the movie through his own production shingle, build his own sets and utilize crew members from his TV show Alfred Hitchcock Presents. So where did the wife fit into all of this? Alma reportedly found a blooper in the movie just before it was about to be released, when she noticed the dead Marion blinked and/or took a breath (depends on who you ask). It was during a post-mortem sequence which was scrapped as a result."

The photo of Hitchkock and Alma Reville at the top, by the way, was shot in Saint-Moritz in 1975; milímetros has a terrific related gallery, "Hitchcock y las mujeres."

Also in the works. "Selena Gomez has been cast in Harmony Korine's Spring Breakers, an indie drama about a gang of female college students who rob a restaurant to fund their holiday," reports Henry Barnes in the Guardian. She joins James Franco, Emma Roberts and Vanessa Hudgens.

In other news. The New York Times Magazine is previewing its Hollywood Issue, most extravagantly with Touch of Evil, a "video gallery of cinematic villainy, inspired by nefarious icons," featuring the likes of Brad Pitt, Rooney Mara, George Clooney, Kirsten Dunst, Ryan Gosling and Viola Davis with an accompanying portfolio of photos. Also up so far are "Riffs" on "The Year in Movies," brief observations by the likes of Alex Pappademas and other occasional and regular contributors, AO Scott's essay on evil in the movies:

Over the past decade, we have become accustomed to agonized or shadowed heroes, including Tobey Maguire's moody Spider-Man, Christian Bale's brooding Dark Knight and the strangely melancholy James Bond incarnated by Daniel Craig. Even Harry Potter had his moments of anger, moroseness and ill humor. But the grimness of these heroes arose less from the moral defect of being tempted by evil than from their intimate knowledge of its depths. They could be lawless, vengeful, guilty and tormented, but only because the enemies they faced were so utterly beyond the reach of compassion or reason. Fiennes's Voldemort represented one face of this kind of unredeemable vileness: grandiose, totalitarian, obsessed with power. The other side — whimsical, chaotic, devoted to destruction for its own sake — was brought most vividly to life by Heath Ledger's Joker in The Dark Knight.

Lists. Time's "Top 10 of Everything of 2011" package went up yesterday and among the "54 wide-ranging lists" are Richard Corliss's "Best Movies" (#1: Michel Hazanavicius's "delightfully inventive comedy" The Artist), Mary Pols's "Worst Movies" (#1: Adam Sandler's Jack and Jill; "maybe he hates us, the audience") and the "Performances" (#1: Brad Pitt for The Tree of Life, Moneyball and Happy Feet Two).

The New Yorker's Richard Brody goes for "26 Best Films of 2011" and his surprise choice for #1 is The Future: "Miranda July is the Marguerite Duras of 2011: she infuses her movie with literature in order to make it more truly cinematic, reveals a choreographic precision that evokes physical intimacy and remoteness better than any other film this year, bares her metaphysical strivings in order to explore her most practical and venal fears and desires, fulfills the promise of her film's exquisite title." David Denby's list of ten may or may not be in order, but either way, he's got Hugo at the top: "In Martin Scorsese's wondrous 3-D masterpiece, you feel like you're inside a giant box with the entire history of the cinema playing on the walls."

The Toronto International Film Festival has presented its lists of the top 10 best features and top 10 best short films of 2011 from Canada. IndieWIRE's Peter Knegt has the full press release (with, of course, the full lists, plus the names of the panelists) and notes that "Quebec films had a strong presence on the list, including Jean-Marc Vallée's Café de Flore, Sébastien Pilote's Le Vendeur, Guy Édion's Marecages and Philippe Falardeau's Monsieur Lazhar, which is also Canada's entry into next year's Academy Awards. Canadian cinematic icons David Cronenberg, Sarah Polley and Guy Maddin were all represented as well with their A Dangerous Method, Take This Waltz and Keyhole, respectively."

#8 in Ben Sachs's countdown at the Chicago Reader is Target: "Having seen it only once (with a spellbound audience at the Chicago International Film Festival in October), I'm still undecided as to whether this philosophical sci-fi epic — directed by Alexander Zeldovich and cowritten by the great postmodern novelist Vladimir Sorokin — is a masterpiece or a gigantic, one-of-a-kind mess. I'm certain, though, that I've never seen anything like it."

Interviews. Claudia Cardinale's in London and Steve Rose didn't pass up the opportunity to talk with her for the Guardian, which has also posted a photo gallery:

After 8½ and The Leopard, there was Sergio Leone's Once Upon a Time in the West, and Werner Herzog's Amazonian epic Fitzcarraldo, whose fraught production, beset by death threats and cast meltdowns, is the stuff of legend. "It was the most incredible adventure of my life!" Cardinale's eyes light up behind her tinted spectacles. "Just a small group of us, with all the animals in the forest. Can you imagine?" Wasn't it dangerous? "No! I like danger!" Herzog? "A marvellous man, very intelligent and fantastic." Kinski? "Oh my God! But he was afraid of me!" Surely the notoriously priapic actor must have tried it on? She laughs, then says, gnomically, "For me, work is something, life is another thing."

Over the years, Cardinale has been romantically linked to everyone from Jean-Paul Belmondo to Warren Beatty to Jacques Chirac. "I had lots of friends. Steve McQueen I would see in Rome because he was always coming to Ferrari to test their new cars. Rock Hudson was one of my best friends [she starred in two movies opposite him]. Paul Newman gave me his house in LA to live in when I was there."

Dennis Cozzalio talks with Edgar Wright about The Wright Stuff III: Movies Edgar Has Never Seen, a series opening on Friday at the New Beverly Cinema in Los Angeles, and about "the plight of 35mm, and even the recent passing of a titan of iconoclastic British cinema."

﻿For news and tips throughout the day every day, follow @thedailyMUBI on Twitter and/or the RSS feed.﻿﻿﻿﻿﻿﻿﻿﻿﻿﻿﻿