Whilst wading through CPH:DOX’s mammoth non-fiction programme, I was oddly reminded of a line from one of the those well-thumbed works on documentary film you’re forced to read in college. In his Introduction to Documentary, one of Bill Nichols’ many attempts to define the slippery term is to say that, “Documentaries are what the organisations and institutions that produce them make.” Quite apart from CPH:DOX’s own increasingly active role as a producer, it seems at once entirely appropriate and entirely banal to bring this perfectly circular adage to bear on a festival that carries the D-word in its very name: if a film showing at a documentary film festival is by definition a documentary film, how does it behave as such? Yet all banality aside, using the concept of the “documentary” in the capacity of a self-evident reading aid offers as good a way as any of negotiating the sheer wealth of different forms, organising principles and categories laid out by the festival’s programme. Given CPH:DOX’s well-burnished reputation as the go-to location for boundary-crossing, edgy fare, it feels most fitting to apply this documentary yardstick to the many films that inhabit these border regions, even if the sheer variety on display here mean mixed results are inevitable.

On the one hand, discerning the degree of documentaryness in, say, Peter Anthony’s The Man Who Saved the World is a fairly thankless task. The dominant force in this true story of a Russian army commander who prevented a 1983 radar malfunction from unleashing World War III is the classic Hollywood three act structure, with the only nominal nod to the real consisting of having the commander play himself. By this virtue, nothing would actually stand in the way of CPH:DOX programming a whole new sidebar of biopics; they’re “true stories” after all. On the other side of the spectrum however, whole new dimensions emerge when you revisit and re-read films such as Pedro Costa’s Horse Money or Tsai Ming-Liang’s Journey to the West as documentaries, the dream-like logic of the former and the sunny driftings of the latter being equally concerned with bending their pre-existing realities into sinuous new forms. 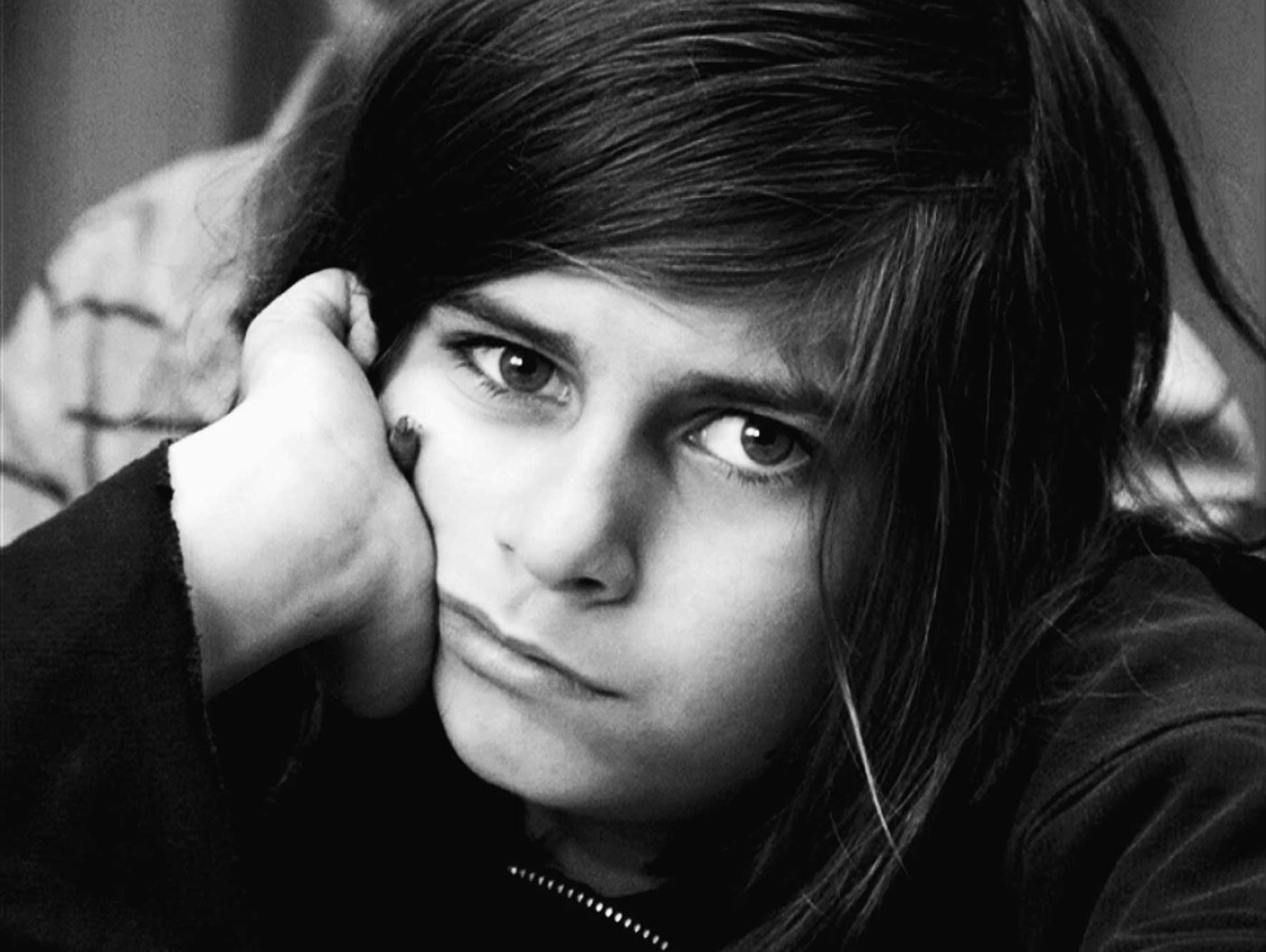 While there’s no mistaking Amanda Rose Wilder’s Approaching the Elephant for anything other than an observational documentary, there’s still something thrilling about how it retools this mode into a springboard for subtle abstraction. The starting point is reminiscent of countless other institutional portraits: the foundation of a so-called free school in New Jersey, a vaguely utopian undertaking whereby the school’s rules and curricula are determined democratically by the students and teachers together. Yet rather than being content to merely watch and unobtrusively cut where necessary, Wilder actively hews her observations into fittingly conceptual form. The combination of jagged editing, tight framings and the levelling effect of the black and white images deliberately blurs the boundaries between different times, locations and situations, collapsing the everyday life of the school into an endlessly repeating sequence of activity, incident and discussion. The resultant flurries of faces, hands and rhetorics are in perfect harmony with the sense of freewheeling chaos that increasingly envelops the school. Although it’s hard not to feel disappointed once the chaos abates and the film settles back down into more familiar observational territory, this disappointment still carries a productive duality: perhaps you can only resist established structures for so long. 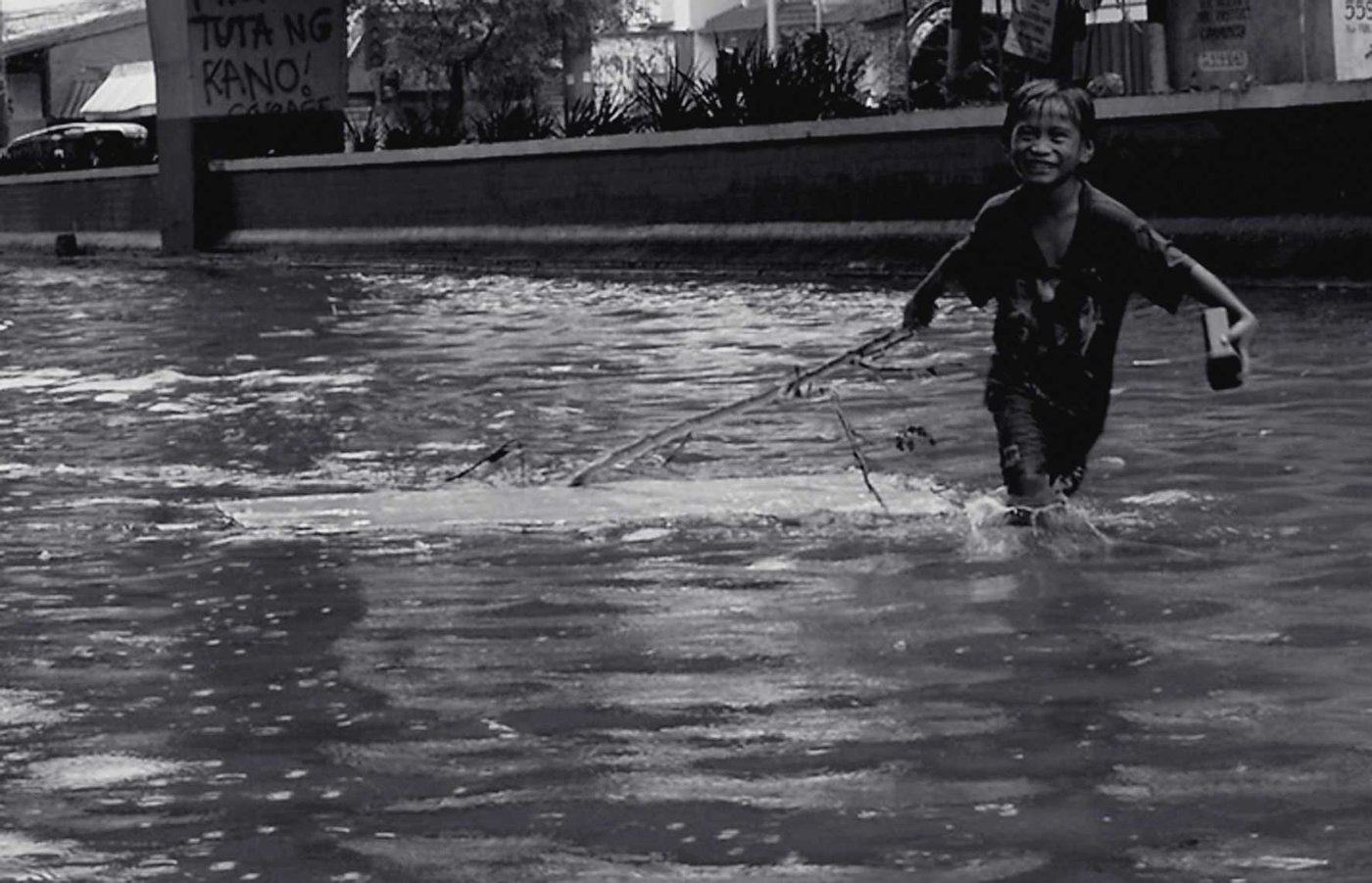 With From What Is Before hardly having receded from the memory, it was an unexpected pleasure to engage with Laz Diaz again so soon, a feeling given additional piquancy by the fact that Storm Children: Book One is a documentary. For this shift in mode for the director is by no means a shift in form, as the same palette of lengthy shots, fascinatingly multi-layered visual compositions and precise dissections of individual locations bears witness to. It is only the content of the images that reveal their irretrievably documentary nature: the sheer mass of water still flowing through Tacloban City in the aftermath of Typhoon Haiyan and the random debris it throws up; the ship whose hull now cuts into the tarmac of the road; the objects that emerge from under a sheet of aluminium liberated by extensive excavations. And just as the central focus of From What Is Before emerges in typically unhurried fashion, Storm Children is equally willing to take its time in mapping out its young protagonists’ environs before they are properly introduced. After more than an hour of static, spare, stark observation, Diaz suddenly engages his subjects in conversation before being led through their makeshift village in a wonderfully sustained handheld tracking shot, his shift in documentary tactics feeling oddly like a narrative blossoming into life. Acquaintances having now been made, Diaz gently slips back into observation in the form of one rapturous 10-minute sequence that shows hordes of children rafting back and forth to the two massive abandoned ships run aground in the bay, nothing else on their minds but being able to leap off them into the water: one brief moment where the storm seems to have passed and they can, for a while at least, just be children again. 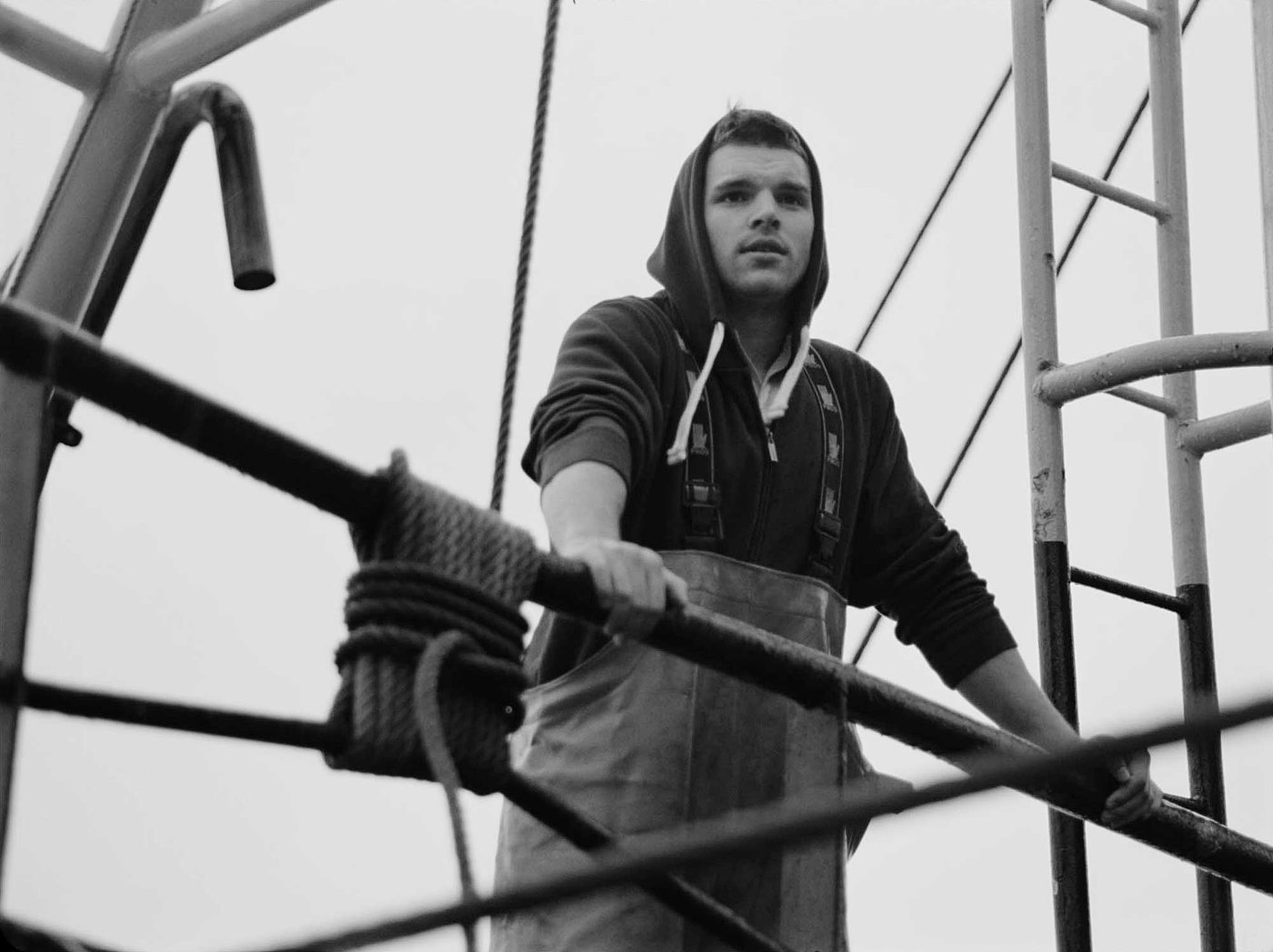 In one of those typical festival coincidences, there is some considerable visual overlap between Storm Children and Lonnie van Brummelen and Siebren de Hann’s Episode of the Sea, even if the rusting keels and hulls of the former look almost inconveniently real when compared with the aggressively matt ones of the latter. There’s actually very little in Episode of the Sea that doesn’t seem artificial, whether the people of the Urk region of the Netherlands drolly declaiming their stories and concerns, the stage-like trawler or the fish processing plant that resembles a toy factory, even as the film constantly regales us with the specifics of its documentary practice. Yet all this impish artifice is miraculously integrated into an entirely organic whole, at once a paradoxically tactile exploration of the texture of fishing, a globally-minded ethnographic study of a highly specific region and a blueprint for how to shrink the gap between filmmaker and documentary subject. Although the high archness of tone can get wearying at times, it’s hard to recall another film so disinterested in the traditional trappings of the documentary that is at the same time so brazenly willing to shout its documentary status to the world. 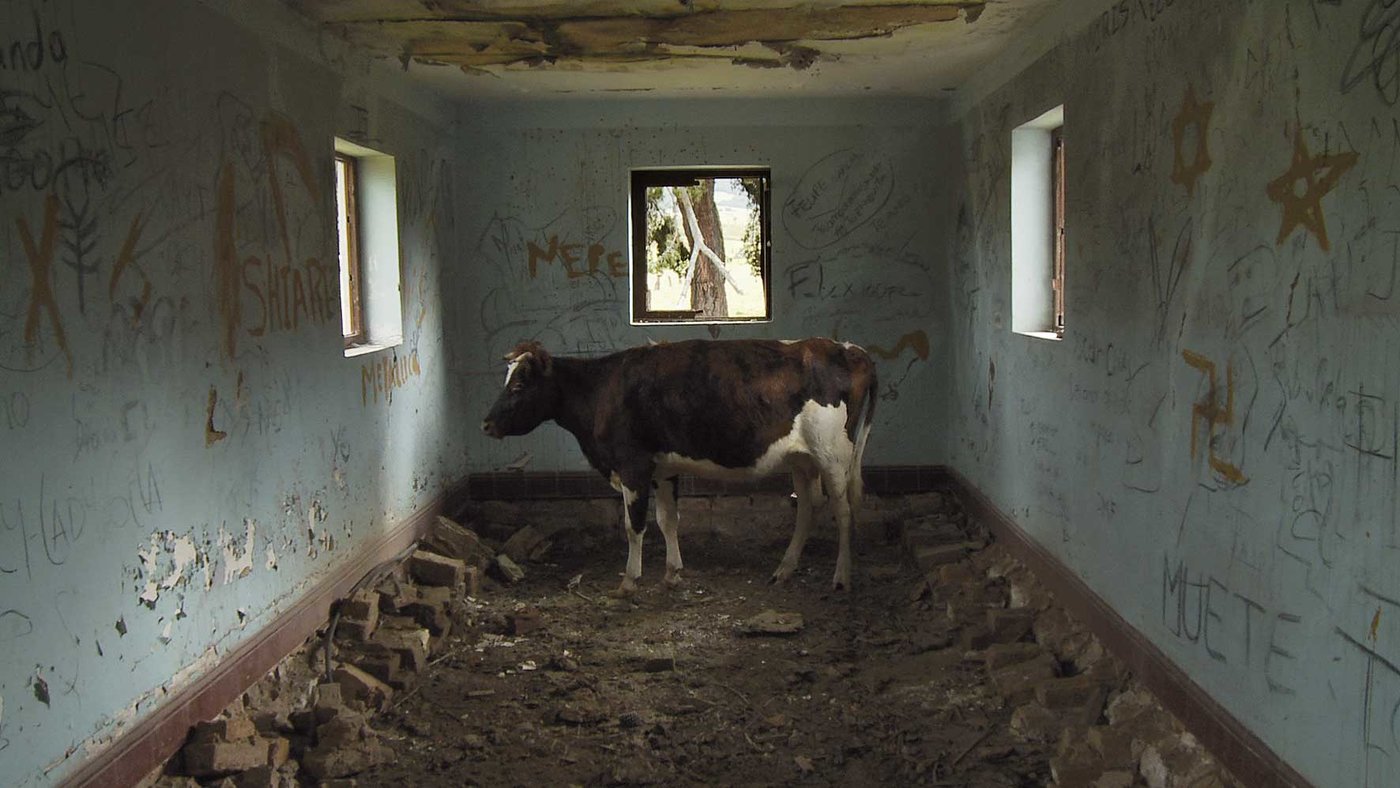 After all the fun with definitions and labelling, it was ultimately two strangely similar, yet entirely distinct shorts that managed to blow the question of documentary degrees out of the water once and for all. The one token thing that anchors Guillermo Moncayo’s Echo Chamber to the real is the pre-existing stretch of Colombian railway track that bisects forest and village alike and forms the camera’s main vantage point. But it’s no longer people or goods that move along it, just a teenage boy manning a five-megaphone rig mounted on a railway car, which broadcasts first news of the local weather conditions, then government recommendations for action and finally guidelines set out by the military. Yet it’s never clear who exactly this “factual” information is aimed at, given that the houses and streets are strangely devoid of life, the various buildings and construction projects have fallen into rack and ruin and farm animals and dogs roam freely though the abandoned spaces. Mesmerising in its mastery of atmosphere, Moncayo’s film feels like an accidental recording of the calm before the storm, a storm all the more disquieting for the fact it may have little to do with the weather. 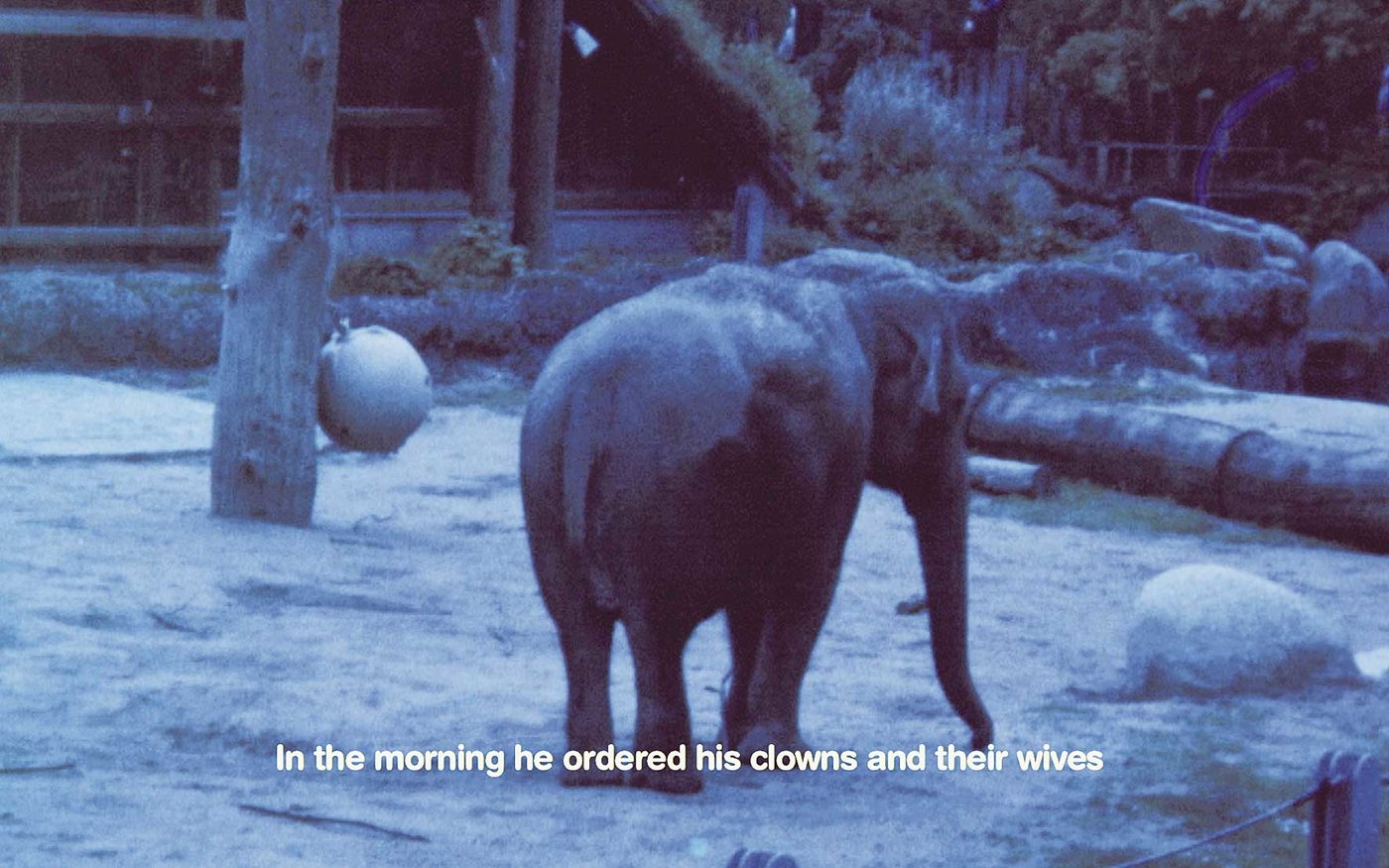 While Moncayo’s document of an indistinct mood works by subtracting the people from the landscape, Egyptian contemporary artist Basim Magdy’s The Dent creates its own unique atmosphere though a process of blissful addition. Via subtitles deliberately unburdened by an accompanying voiceover, Magdy spins the fantastical tale of a faraway city seeking to host the Olympics, this story of whimsical hubris unfolding between circus elephants, concrete dinosaur eggs, stuffed animals, misguided construction projects and historical discoveries. At once fanciful and sinister, this realm is visualised in a fluid stream of 16mm images of a shimmering instability, as almost constant superimpositions mean that a museum can easily give way to glittering polygons, breaking waves may always open up behind a military parade and there’s nothing to stop a fairground ride whirling out across the sea while branches rustle in the foreground. Yet at every point when all these infinitely mutable combinations threaten to run wild, they are hemmed in by something soberingly, stubbornly non-fantastical: the real world itself. Whether the matchstick models made to mimic Paris and New York, the dented stadium built in the year Hitler invaded Poland or the sheer inescapability of capitalism, reality always ends up trumping fantasy here, as if there were no flight of fancy wild enough to break free of the shackles of reality.

Although Magdy’s far-reaching, effortlessly lyrical essay channels various experimental film traditions without ever seeming derivative, I had the strange impression that the film's nearest precedent comes from the world of literature rather than cinema. In Georges Perec’s W, or the Memory of Childhood, dystopian fiction and painfully real autobiography alternate and interact while remaining pointedly apart, two separate Vs stacked together to make up a W. In one final turn of the screw, Magdy chops off the latter V whilst constantly evoking the space it leaves behind: a fiction kept in place by a now invisible documentary.