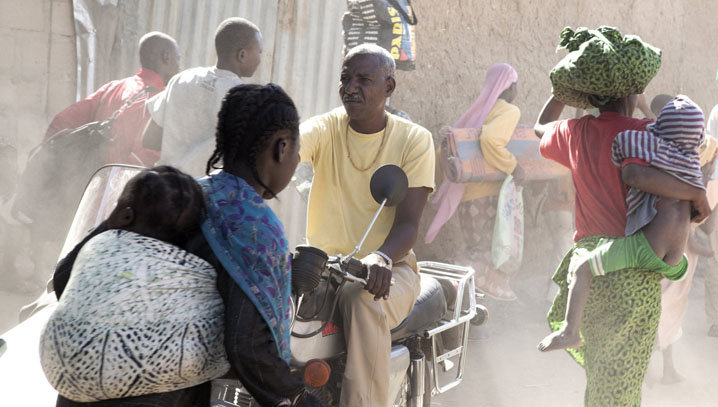 "By Sunday evening the strongest competition film, at least for me, was the deceptively straightforward A Screaming Man, from the Chadian-born director Mahamat-Saleh Haroun, a self-designated exile living in France." Manohla Dargis in the New York Times: "The story turns on a former swimming champion turned hotel pool man, Adam (Youssouf Djaoro), whose world collapses when he loses his job to his only son. With its initial unhurried rhythms and emphasis on quotidian details — one gently sexy early scene shows Adam and his wife feeding each other watermelon — the film creates a misleading sense of calm, which makes the coming tragedy all the more devastating. What begins as modest portrait of a happy family gives way to a story in which the encroaching civil war decimates not only the country, but also the soul of a man who believes the pool is his entire life."

"In every shot, Haroun puts his camera to quiet but grand use — a combination of the dramatic, the lyrical, and the journalistic." The Boston Globe's Wesley Morris: "Mostly, he contrasts the rich faces of his actors with the vastness of the landscape. It's a formidable, unexpectedly tragic juxtaposition. The people's stress rhymes with the atmosphere's strife. Djoaro, who had a part in Haroun's superb 2002 film Abouna, has a commanding authority even when his heart is breaking."

Peter Brunette in the Hollywood Reporter: "War is everywhere, in the sound of the jets heard overhead (a device that recalls Tran Anh Hung's The Scent of Green Papaya), in the constant, increasingly frenetic radio reports concerning the advancing guerrillas, and in the teeming refugees that flee to neighboring countries once the city is threatened. But Haroun is uninterested in big war scenes and is best at evoking the little details of life."

"Where Dry Season (Daratt) etched itself in the mind thanks to its mix of visceral drama, myth-rooted storyline and primal imagery, A Screaming Man struggles with a contrived plot that tries, but mostly fails, to resonate," finds Lee Marshall in Screen.

Mike Collett-White reports for Reuters: "Asked why he often focused on the relationship between father and son, Haroun told reporters after a press screening: 'It's a kind of history handed down from father to son... and from generation to generation. That's why I attach such importance to the father-son relationship,' he added, speaking through an interpreter. Haroun said the idea for A Screaming Man (Un Homme Qui Crie) originated in 2006 when he was making another film, Daratt, in the Chadian capital of N'Djamena. Rebels invaded the town forcing the crew to decide whether or not to flee the fighting, and in 2008, during the shooting of Expectations, rebels were again on the move in Chad."

Updates: "The film's dramatic thrust — essentially: Don't donate your son to the military to get your job back or you're probably going to feel pretty guilty about it later — is barely enough to motivate a short film, let alone A Screaming Man's mercifully brief 90-minute runtime," writes Matt Noller at the House Next Door. "And its political content is glancing at best; there's an argument to be made that the father's struggle is an allegory for Chad as a whole, but if that's the case, then it's an incredibly superficial critique that does nothing to get at what has caused Africa's strife or what could be done to fix it."

"Haroun's widescreen compositions are sharp and evocative," writes Mike D'Angelo at the AV Club, "but he has a regrettable tendency to slowly track into his protagonist's sorrowful face whenever he thinks the film needs a shot of emotion, and it was hard for me not to imagine how much more urgent and purposeful this scenario might have been in the hands of, say, the Dardennes."

Update, 5/18: "The film's images and themes are more memorable and persuasive than its relationships and plot turns, some of which tend towards the unconvincing," writes Dave Calhoun in Time Out London. "But A Screaming Man has a slow, cumulative power and is a moving comment on how war corrupts in the most unlikely and unnatural of ways. The film is perhaps a little too similar to Daratt to suggest that Haroun has developed and progressed a great deal since that film, but he remains one of Francophone African cinema's leading talents."