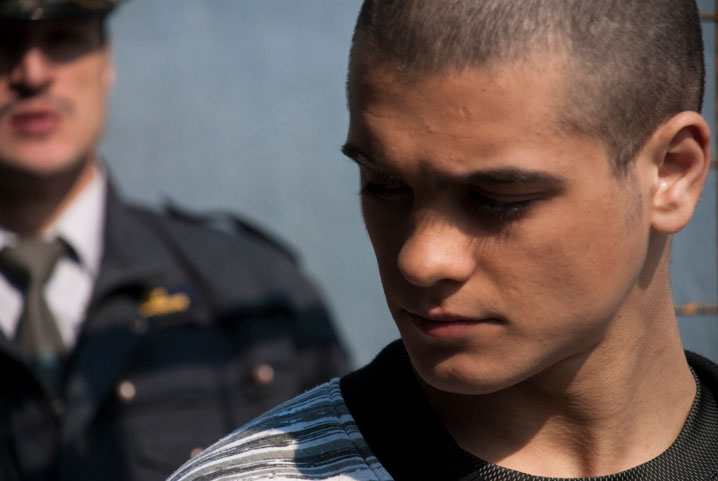 Imprisonment figured into even the top brand Competition entries at this year's Berlinale. "You'll never leave this island," Teddy Daniels (Leonardo DiCaprio) is warned in Martin Scorsese's Shutter Island, and there are times when Ewan McGregor, The Ghost Writer, worries that this may be his fate as well — and of course, Roman Polanski completed his film while under house arrest. The two strongest films in Competition to my mind open inside prisons: Benjamin Heisenberg's The Robber (see last Wednesday's entry) and Florin Serban's If I Want to Whistle, I Whistle, winner of the the Grand Prix and the Alfred Bauer Prize (see the awards entry).

Serban and producer Catalin Mitulescu, himself an award-winning director (Trafic, Palme d'Or at Cannes in 2004, and The Way I Spent the End of the World, 2006), co-wrote the screenplay based on a play by Andreea Valean, but drafts were revised considerably once Serban began working with the young men in two Romanian penitentiaries he'd eventually cast in all but the lead roles. At the press conference, Serban noted that he was struck that the fence surrounding the correctional facility where they ended up shooting was itself hardly a deterrent to escape (and indeed, at one point in Whistle, we see it jumped with ease). It's the yellow line on the ground just in front of the fence that effectively serves as the barrier these guys won't cross if they still hope to return to freedom once they've done their time.

From a bundle of observational, hand-held shots of the guys at work and play in what looks more like a summer camp than a prison, a protagonist emerges: Silviu, not yet 20, remarkably played by George Pistereanu, whose eyes tell us that he is intensely there but nothing at all about what Silviu's thinking, is called in to see an unexpected visitor. His little brother has come to tell him that their mother has returned from Italy to take this boy Silviu has practically raised single-handedly back with her. Silviu makes him swear to stay put. As the boy returns to their mother, waiting by the car, Silviu races to the fence to catch a view — and crosses that yellow line. In five days, Silviu will be released, but that one glance is worth risking it all, even a guard's beating he receives right there on the spot.

We'll learn soon enough why the prospect of his mother taking his brother to Italy enrages Silviu, but for a while, he's able to maintain the self-control needed to navigate the complex and volatile politics within the prison to do everything in his power to keep the boy home. Some of his decisions seem thought through. If a leader of a pack insists on making Silviu his slave in front of everyone (and it's not a pretty initiation), he'll not resist, as that would only delay his release. Other decisions seem more impulsive (a call made on an illegal cell phone, for example; the currency, as in so many prison movies, is cigarettes). What's fascinating is that the incident that sparks his snapping altogether has nothing to do, at least directly, with what he's believed up to that moment to be his driving motivation, that is, saving his brother. The intensity is earned and honest and the ending comes as it must, neither triumphantly nor tragically.

MORE IN AND OUT OF THE SLAMMER

Hans Petter Moland's drolly self-satisfied comedy A Somewhat Gentle Man wouldn't have been as despised as it was by most of the fellow festival attendees I spoke with if it'd opened quietly in a few arthouse theaters in some off-season — right about now, for example — instead premiering at an "A Class" festival, in Competition no less. It'd be the film many of these same critics would be recommending to their readers as an alternative to, say, Cop Out. At any rate, Ulrik (Stellan Skarsgård) is released from prison after doing 12 years for murder and he's sort of passed around by an assortment of air-quote quirky characters until he finally gathers himself and retakes control of his own life.

Though it isn't a prison movie, I want to mention Gustave de Kervern and Benoît Delépine's Mammuth in more or less the same breath here because, like A Somewhat Gentle Man, if it were American, it'd be aiming for Sundance, and who knows, both would probably have a decent shot at making the lineup. Both films center on performances by name brand stars, in their respective countries and around the world (in Mammuth, it's none other than Gérard Depardieu), as men past their prime, never the brightest bulb in the chandelier in the first place, baffled by the ways of the world, their hair straggling past their shoulders (Depardieu actually looks as if he's just stepped out of his Obelix costume and undone the braids) and above all, like their friends and family, poor. Which, to these filmmakers, at least within the universes of their respective films, equals dumb. Dumb, that is, to an eccentric degree, played for laughs. The getups for all these characters might as well be clown costumes.

Back to jail. Thomas Vinterberg's Submarino is "an excessively dour Danish tale of two siblings and their dysfunctional, tragedy-marbled lives," writes Neil Young in the Hollywood Reporter: "They should really have called it 'Monotono.'" I wouldn't disagree. We're wallowing among the poor and the destitute again, only this time, it's not for laughs. It's one godawful thing after another — alcoholism, heroin addiction, death of an infant, you name it — and the brothers, who go for years out of touch with each other, land behind the same bars. Neil: "By this stage, only the most indulgent of audiences will be still be emotionally invested in a chronicle of despair that's almost entirely unleavened by humor or changes of mood or pace." 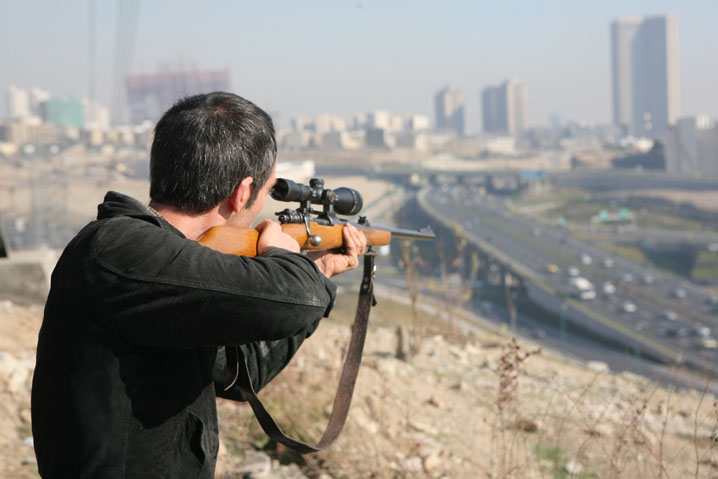 As Rafi Pitts's The Hunter opens in Tehran, Ali, played by the director, has recently been released from prison, but we don't know what he was in for, and for that matter, we don't learn much about him at all in 92 minutes. He does love his wife and daughter, but the moment that's established, he learns they've been killed in the crossfire of a clash between police and demonstrators. So he quietly decides to take his hunting rifle up to a hill overlooking a highway, aims randomly at first, but then, once he sees a police car, realizes he's found his target. Ali shoots and kills two officers, races off to the woods, is caught by two other officers who then can't find their way back. The lost party of three wanders a bit and, in the end, only one of them survives.

Why? "Keeping things open to interpretation is an important element of my filmmaking," Pitts is quoted as saying in the press material. "As a director, I try to give as many meanings as possible." A perfectly viable strategy, to be sure, but when the material is so loaded — The Hunter was shot during last summer's disputed presidential election — the reaction of most viewers to being served, during such highly charged times, two dead Iranian civilians and two dead Iranian policemen on what is essentially a blank slate will inevitably be disappointment, and in my own case, frustration bordering on anger. Particularly since the premiere took place on the day after Jafar Panahi, a filmmaker who knows very well indeed how to address the rapid changes his country is going through, was denied permission to leave Iran to attend the Berlinale.

Not only is The Hunter a missed opportunity, but today's arrest of Jafar Panahi only rubs salt in the wound.