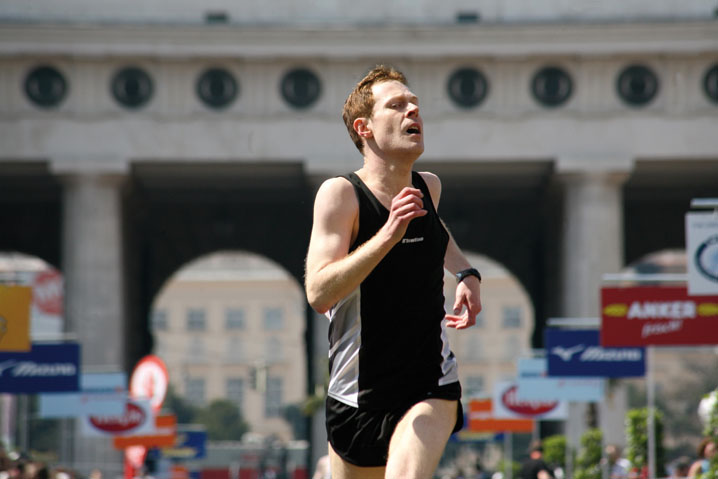 Anyone looking for a running motif at this year's Berlinale didn't have to look far. Prisons. More to the point, men in prisons — or just out of prison or about to land in prison. In an interview for Deutschlandradio (via Cargo, in German, but still, here's the MP3), Christian Petzold notes that opening a film with the release of a prisoner is a handy move in that our protagonist is being born, in a sense, and we, the viewers, learn the ways of the world he's heading out into as he does. At the same time, though, no one is able to start over from scratch. "Cinema knows there's no such thing as a tabula rasa," he says. "We come out and there are structures out there and we're carrying ourselves out into these structures. Always a very nice beginning. And we can usually tell after three or four minutes whether they're going to make it or not."

Petzold, who didn't have a film at the festival this year, is assigned to "the first generation of the Berlin School" in Marco Abel's taxonomy for Cineaste (Fall 2008) along with Angela Schanelec and Thomas Arslan, followed by a second generation that includes, among others, Benjamin Heisenberg, Maren Ade, Valeska Grisebach and Christoph Hochhäusler. Last March, Andrew Tracy wrote here in The Notebook, "For all that the Berlin School films evince various lessons learned from the touchstones of modern Asian cinema (wide framings, distended, single-shot dialogues, seemingly random wanderings and contemplations) and those of Europe past and present ([States of Longing: Films from the Berlin School programmer Andrea] Picard invokes Eustache, Garrel and Pialat, with the Dardennes lurking nearby), this is a decisively protagonist-driven, implicitly psychological cinema — a cinema of traditional concerns and intentions given a fresh, incisive spin by an increasingly common set of cinematic methods."

One year on, a few tweaks, a little reclassification may be in order. While the Berlin School and "mumblecore" differ in just all sorts of ways, in both cases, the filmmakers tagged with one label or the other have had to deal with the reductional impulse behind any label. On the one hand, the filmmakers probably appreciate the PR, however quietly; festival and arthouse programmers can screen packages that may include some films that might not have made the cut on their own. On the other hand, every artist naturally hopes that his or her work will be appreciated for its own merits. Here's Heisenberg, responding to Julia Teichmann's obligatory Berlin School question in the Berliner Zeitung: "I like the people who have been subsumed by this term. I thought it was a good thing that there was such a term because I had the feeling that it describes a phenomenon: Young filmmakers who set out to deal with the reality of our country. They try to be precise with minimal means. As for the actual term, I'm not too wild about it. I have noticed that there are certain resentments associated with it."

Filmmakers select projects and realize them they way they do for a vast set of reasons, but in the cases of filmmakers lumped in with one movement or another, it's difficult to resist the suspicion that among those reasons would be a desire to differentiate oneself from an involuntary collective, to step out from under the umbrella. We've seen some "mumblecore" directors make such moves while, over more or less the same period of time, that is, in the past few years, we've been seeing similar shifts among the Berlin School filmmakers as well. As for the original Berlin School model, bearing the tendencies Andrew Tracy describes, Schanelec, Ade, Griesebach and Hochhäusler carry on evolving away from it to varying degrees, each in his or her own individual direction. Petzold, Arslan and Heisenberg have gone greater distances. They've embraced genre.

Petzold, whose most recent film, Jerichow, is a cooly composed retelling of James M Cain's The Postman Always Rings Twice, reminds Deutschlandradio that Godard once said that policiers are so beloved by filmgoers because the detective is allowed to pry into private lives, into spaces usually shut off to the public. In The Big Sleep, for example, Philip Marlowe (Humphrey Bogart) penetrates the private spheres of the wealthy, the decadent, the degenerate without, for one thing, himself becoming infected, and for another, having much of a private life of his own. When audiences went from watching the detectives on the big screen to watching them on television, the detectives began to change, taking on unnecessarily complicated back stories to such a degree that they could no longer be stand-ins for *us*.

Enter the faux documentarians, reality television (I'm racing through Petzold's argument here, surely doing it a disservice), barging into the lives of the rich and famous with their cameras, and into those of the poor as well: "Here's a guy who can't pay his gas bill. We'll get to the bottom of this." We're currently seeing an absurd and unprecedented access to what was once private, "whereas before, cinema had portrayed private lives not obscenely, but as a fiction, a dream. Perhaps the return to genre has something to do with the fact that we've come to realize that in To Have and Have Not or in The Big Sleep and other films noir, there was more truth than in any obscene infiltration into private spaces, supposedly in the name of 'documentary.'" 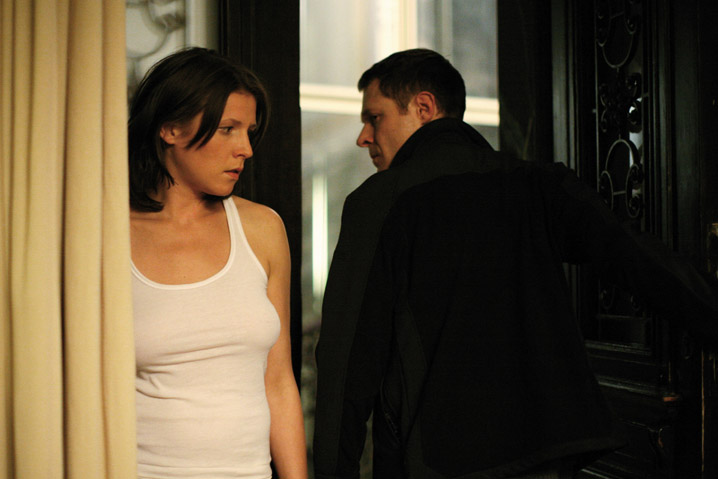 Petzold's proposal that detectives lost their potency as figures onto which we can transfer some sense of identification once they developed personalities is actually a fascinating way into Heisenberg's The Robber, one of the best films screening in the Competition this year. Johann Rettenberger (Andreas Lust) runs and robs banks. When we're introduced to him, he's running circles around a prison courtyard. Locked back in his cell, he runs on a stationary trainer. When he's released, he runs marathons and, when he comes from nowhere and wins a few, he becomes a local hero in the Austrian press. Between runs, he slips on a mask, grabs his gun and robs a bank. Quick and easy. Takes the money and runs. The marathon trophies mean nothing to him, and as for the money, he stashes it in plastic bags shoved under his bed and seems to have no intention of ever thinking about it again. He runs. And robs banks. That's it.

There was a real Johannes Rettenberger who shocked Austrians in the 80s when they discovered that the runner and the robber they'd been following in the papers were one and the same. Martin Prinz wrote a novel based on the story, and Heisenberg worked with him on the screenplay, set not in the 80s but during no other particular period, either. The place is Austria, but Heisenberg and Prinz don't bother with social milieu or, for that matter, politics, psychology, all the rest. Rettenberger seems to have no motive, no goal, no traumatic background, no desire for personal contact. When he moves in with Erika (Franziska Weisz), it is, at first, for the sake of convenience and one senses that he doesn't have to try hard to keep it that way. For a while.

So what does drive Rettenberger? Some, like Petzold, suggest an addiction to adrenaline, hence the disinterest in running towards any destination or in the spoils of the bank jobs. My hunch, though, is that The Robber is about more than a medical condition; it's about compulsion, the doing rather than the having that results from doing, whether it be running, Twitter, shopping or seeing as many films at a festival as you possibly can before conking out.

The genre Heisenberg's referred to over and again in interviews is the nature documentary. He was determined to shoot The Robber as if he were observing a lone wolf in the wild, and yes, for the most part, the eye does remain neutral. But this is also an action film, and a technically superior one at that. Rettenberger is as fast on his feet as Jason Bourne, literally and figuratively — a spur-of-the-moment escape from a police station is spectacular — and at times, just as deadly. But Reinhold Vorschneider's camerawork is rock steady, even when chasing Rettenberger through impossible spaces, and Heisenberg's placement of that camera is as expert as the sound design, the musical choices, the editing — The Robber is an extraordinarily well-made, confident and competent film.

Which can also be said of Thomas Arslan's In the Shadows, and Neil Young has already argued the case here in The Notebook better than I could have. Besides noting that the cinematographer is once again Reinhold Vorschneider (who also shot Schanelec's Orly), I'd just re-emphasize how very consciously conventional the film is and, as Neil argues, in the best way. When, for example, Trojan (Mišel Matičević), just released from prison and out to set up his next heist, leaves his hotel room, he closes the door on a small sliver of paper so that it's caught a few inches above the floor. You've seen it a thousand times. He returns. The paper's dropped. He clenches alert and backs away. Inside the room, the two thugs quietly searching it tense up, too. Did they hear something out in the hall? Door opens, and they take a few steps out into the hall to investigate. Pang! Trojan's been hiding around the corner. He's let the first thug pass, knocked out the second one and is now training his gun on the one still standing. Classic stuff, sure, but when done right, it still works.

What makes In the Shadows a film of 2010 rather than just another sturdy noir exchangeable for any other is, at least in part, Berlin. Not a pretty city. To live here, you have to have toughened up your defenses against persistent aesthetic assault. But the city also has its corners that are immediately recognizable as being of the 21st century while at the same time hinting at the 70s, particularly in the western half. And Trojan dresses accordingly, quietly outsmarting rival outlaws and the corrupted law alike. Will he make it? Pull off that heist, head out to the country and lie low for a while? Petzold says we can usually tell three or four minutes in; not this time.

In the next Berlinale roundup: More prison films.